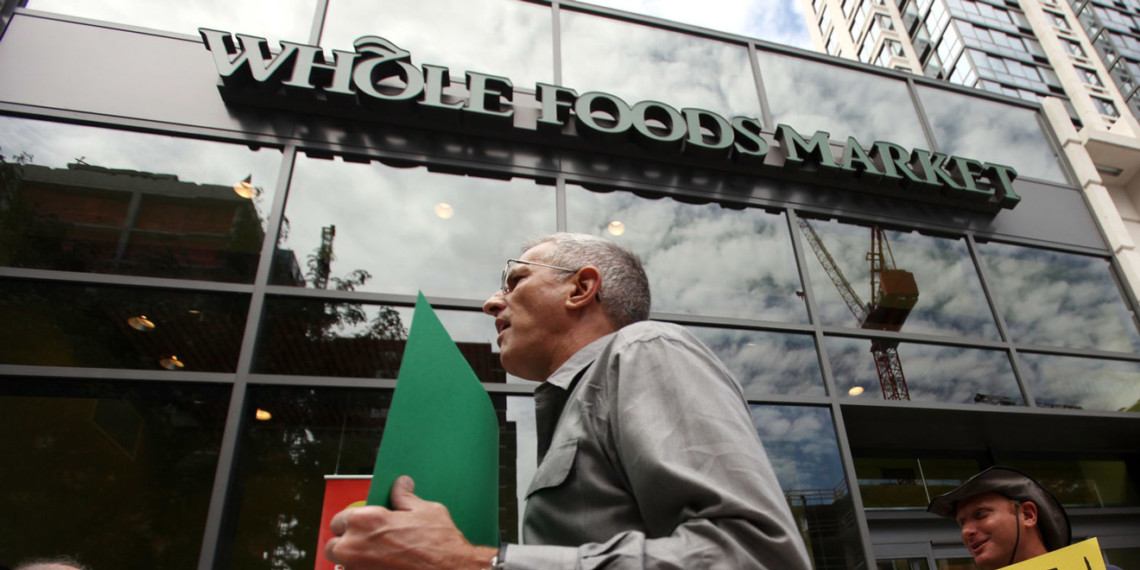 Workers at Whole Foods and General Electric are among thousands walking off the job this week. - Credit by Getty Images

Jordan Anderson, an Instacart full-service shopper in Portland, Oregon, started her job in April 2019. At first, she was making enough to sign a lease on an apartment. By December, however, she was borrowing money for rent.

But it’s not because Anderson couldn’t get enough work.

Anderson’s profits are low, she said, because even though she works long hours for Instacart, the company has her classified as an independent contractor. That means she receives no benefits and has to pay all of her own taxes, along with car payments, fuel, tolls and any driving equipment needed for the job. She even has to purchase her own insulated bags for transporting food. She stays afloat by qualifying for food stamps and Medicaid.

Now the global outbreak of COVID-19 has compounded her stress both in small ways—such as the costs and logistics of finding hand sanitizer and disinfectant wipes—and in intense ones like her fear of exposure to the highly infectious disease.

“There’s nothing worse than money anxiety to me,” she said. “The only thing that’s become a bigger source of anxiety to me lately is the idea that I might kill someone’s grandma by not protecting my customers enough. Most of us are terrified of the idea that we might literally bring this virus directly to someone’s door.”

Anderson’s experience highlights why she and thousands of workers—many independent, though some full-time—are going on strike this week. The coronavirus outbreak has essentially been like a lit match being thrown onto labor situations that were already highly volatile.

The scope of the strikes and protests

On Monday, Instacart shoppers and Amazon warehouse workers (many of whom are also contractors) went on strike, though it’s unclear exactly how many workers participated in the protest. The two delivery companies are essential services, as millions of Americans have been ordered to shelter in place to avoid the spread of the coronavirus, but some workers say the companies are doing little to protect them from spreading it.

Jessica, who asked not to be identified by her real name for fear of being fired, has worked for three years at Amazon’s fulfillment center in Seattle suburb Kent, Wash. This past weekend, many workers discovered via social media that one of their colleagues had tested positive for COVID-19.

“I’m not participating in the strike intentionally,” she told Adweek. “I just haven’t gone back since I found out through a coworker that we had a confirmed case. The fact they didn’t inform us or close the building for cleaning upset me.”

Even before that, Jessica said some departments in the warehouse were not observing the CDC guidelines for social distancing, with people working in close contact. After the exposure, she had to make a choice between her health and her income: “We were told we could use unlimited unpaid time off for the month of March.”

In New York, Amazon responded to a walkout by firing a particularly vocal worker, Chris Smalls, who had helped organize the strike. After Smalls was fired Monday, New York Attorney General Letitia James issued a statement threatening legal action against the company, and calling on the National Labor Relations Board to investigate.

She added: “At a time when so many New Yorkers are struggling and are deeply concerned about their safety, this action was also immoral and inhumane.”

On Tuesday, workers at Whole Foods Market (owned by Amazon) will also strike, citing similar concerns about public health and a lack of safety gear. Their concerns are shared by attorneys general from 14 states and the District of Columbia, who wrote a March 25 letter to Jeff Bezos and Whole Foods CEO John Mackey asking to expand sick pay and protections for Whole Foods staff, including protections for Amazon Flex and other delivery workers (who are classified as independent contractors).

At General Electric, some plant workers walked off the job Monday because they want the company to shift factories to produce the much-needed ventilators increasingly sought by desperate hospitals. The picket comes one week after GE announced plans to fire about 2,600 workers and temporarily lay off another 50% of its workforce for three months. In a letter, GE leadership said the layoffs would save the company $500 million to $1 billion, but later that week President Trump signed a stimulus package designed to pour money into defense contractors like GE.

Instacart’s shoppers worked with the Gig Workers Collective to organize Monday’s strike. In a Medium post, the workers demanded the company provide pandemic protection gear like hand sanitizer and disinfectant wipes, hazard pay of $5 per order, an in-app minimum tip of 10%, sick pay for anyone requiring preventative quarantine if they have a doctor’s note showing a preexisting condition, and an extension of Instacart’s April 8 deadline to qualify for sick pay if diagnosed with COVID-19 (a policy the company recently put into place).

The company responded to the demands by increasing some safety precautions and benefits. But some of those updates, like instituting an accrued sick pay policy, only extend to in-store shoppers, not contractors like Anderson.

Instacart has over 12,000 part-time employees working as in-store shoppers, according to a spokesperson. But over 250,000 people work for Instacart as full-service shoppers, and those workers are contractors who pay their own taxes, have no benefits, and must purchase their own work supplies. The spokesperson said 50,000 new people signed up to work as full-service shoppers in the last week alone.

Because Instacart shoppers often can’t afford to take time off from work, one Washington-based shopper named Ashley started a Twitter thread with the Venmo and Cashapp handles of various shoppers so that people can donate to them during the strike.

The difference between being a full-service Instacart shopper (a contractor) and an in-store Instacart shopper (a part-time employee) is typical of a growing divide among workers, across industries and income levels. At Amazon, some warehouse workers are employees, but many are temporary contractors who don’t have access to the same kinds of benefits and pay.

According to Anastasia Christman, director of the Worker Power Program at the National Employment Law Project, more and more companies are trying to get out of having to provide benefits and stability for workers by classifying them as contractors—even though those companies are often breaking the law by doing so.

The employment law project is part of a coalition of labor groups called Athena, whose aim is to hold Amazon accountable for labor practices. Christman said the contractor model at the company is part of a problem that’s been slowly coming to a boil since the 1980s, when companies first started outsourcing labor such as janitorial and security work to third-party contractor agencies.

“You fast forward to the last decade or so, and that arm’s length that employers started setting up a generation ago has gone even further,” said Christman. “It’s the ultimate social distancing. They’ve gone so far as to say: ‘Well, people aren’t employees of anybody. They do the core work of my business, but I’m going to place all of the onus, for all of the programs our economy has set up to try to help workers, onto the workers themselves. And I’m going to expect them to do it for $12 an hour.'”

When full-time workers are expected to pay their own taxes and social security, buy their own health insurance and other benefits, and even pay for their own work supplies, it slowly erodes the social contract, Christman noted.

“All of these things that we as a society tend to think are part of the deal when you get a job, that’s all just gone out the window,” she said. “We haven’t been paying enough attention to what the ramifications of that would be.”

Misclassifying employees as independent contractors is happening in nearly every industry—including, of course, advertising and marketing. “This model takes place in nursing, in legal work, in journalism,” Christman said. “We really don’t know how many people are implicated in this.”

How the employers are responding

In response to impending strike, Instacart updated some of its safety policies on Sunday. In a press release, the company said it was tweaking the in-app default tip to whatever the customer tipped last, though the lowest option remains at 5%—hardly what the strikers asked for.

Amazon did not respond to Adweek’s request for comment.

A statement sent to Adweek by Whole Foods said the grocer is addressing “unprecedented demand” while also being “committed to prioritizing our team members’ well-being.”

“We have taken extensive measures to keep people safe, and in addition to social distancing, enhanced deep cleaning and crowd control measures, we continue rolling out new safety protocols in our stores to protect our team members who are on the front lines serving our customers,” said a Whole Foods spokesperson.

“Team members in our stores and facilities also have access to up to two weeks of paid time off if they test positive for COVID or are quarantined, an additional $2 per hour on top of hourly base pay, and increased overtime pay,” Whole Foods said. “Whole Foods Market’s longstanding open-door policy encourages direct dialogue between team members and leadership, feedback which continues to shape the decisions we are making every day.”

In a private chat with journalists from several outlets, a Whole Foods worker named Tommy said that wasn’t good enough. “I am staying home tomorrow because my life, and the life of my spouse and child, are worth more than $2 an hour,” he said.

General Electric said it is trying to add more workers to its medical equipment lines, but that some facilities remain aviation-centered.

“GE is working around the clock to increase production of much-needed medical equipment,” said a spokesperson. “GE Healthcare has already doubled ventilator production capacity, with a plan to double it again by June, in addition to partnering with Ford Motor Company to further increase ventilator production. We continue to explore additional opportunities to support the fight against COVID-19, while continuing to support mission-critical work for our customers as well.”