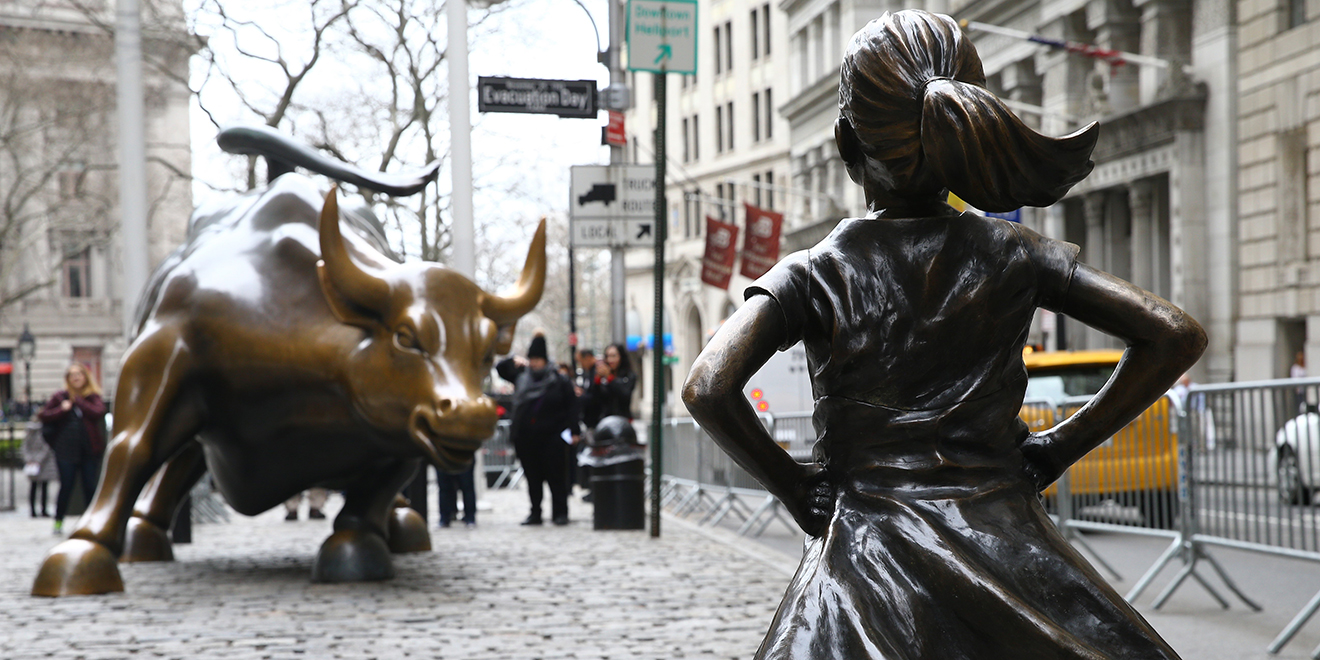 This week’s news that State Street Corp. had agreed to a $5 million settlement over allegations that it underpaid hundreds of female and minority employees came as a shock to many within and beyond the marketing world.

The firm’s status as sponsor of the iconic Fearless Girl statue, one of the most-awarded marketing campaigns in Cannes Lions history, a led to a raft of “I told you so” recriminations on social media and accusations of hypocrisy aimed toward a company that positioned itself as a leader in the ongoing push for gender equality in the workplace.

Fearless Girl, a statue of a young girl facing down Wall Street’s famed Charging Bull, was created by State Street Global Advisors and agency McCann New York to encourage more companies to include women in corporate leadership. The statue debuted this past March, the same month that parent company State Street Corp. learned it would need to dole out millions in back pay  to more than 300 women and 15 minority employees who’d been compensated lower than their white, male peers. The finding was the result of a U.S. Department of Labor audit, required because State Street is a federal contractor.

Yet many prominent businesswomen, advocates and researchers do not see the news as a wholesale refutation of State Street’s efforts or the message behind the work. Adweek spoke to a variety of professionals across the marketing industry, and most framed Fearless Girl’s sudden PR nightmare as as a situation more worthy of reflection than lasting criticism.

“I think it’s an absolutely beautiful campaign that has been inspiring to millions of women … so it’s regrettable that the company that brought that to life wasn’t walking the walk,” said Kat Gordon, founder of The 3 Percent Conference, an event that promotes gender balance. “From what I read, the reason they were audited around this is because they are a federal contractor. I get that people are really upset with State Street, but I suspect that most companies [if similarly audited] would be no better.”

"I get that people are really upset with State Street, but I suspect that most companies [if similarly audited] would be no better.”
Kat Gordon, founder, The 3% Conference

Ariane Hegewisch, program director for employment and earnings at the Institute for Women’s Policy Research in Washington, D.C., said it’s relatively common to find that companies advocating change are still in need of improvement internally.

“I think if you look at companies who are doing good things, they’re often the ones who were caught doing something [bad],” she said. “Not in terms of ‘we were so bad and we want to be good now,’ but in knowing that these kinds of factors affect their reputations and who they can recruit.”

State Street’s settlement was based on a federal audit of 2010 and 2011 employee compensation data, and Hegewisch noted that finance is one of many industries with a history of gender-based wage gaps. The key to recruiting the best new talent, she said, is showing that your company is working to resolve these issues for both the future and the present. “As long as they are improving things and making sure discrimination doesn’t continue,” she said, “that’s great.”

“I believe that marketers have the power to lead the transformation of the businesses they work for,” said Leslie Campisi, chief marketing officer at venture investment and advisory firm Anthemis Group. “The gap between internal and external realities of businesses is not uncommon, and State Street is certainly not the first company, financial services or otherwise, to face this challenge.”

Campisi is far from a champion of Fearless Girl itself, saying the campaign represents “toothless, infantilized feminism.” But she’s not joining the chorus of critics who feel State Street’s suddenly public history of inequality negates the benefits of the campaign.

“Even though I am not a fan of Fearless Girl, one way to read the news is actually as a triumph for the State Street marketing team,” said Campisi. “By going forward with the campaign—getting over their skis, perhaps intentionally—they forced State Street to live the values of the campaign they created.”

Keeping quiet is no longer an option

Gretchen Carlson, the onetime Fox News host who won a $20 million lawsuit against her former employer last year, responded to the State Street news by saying that brushing pay inequality under the rug isn’t a viable long-term option for any company.

“Women are speaking up more than ever before, whether it’s about workplace sexual harassment or unequal pay,” Carlson told Adweek.  “Women have decided they’re not going to take it anymore and that their voices do matter and need to be heard.”

Carlson’s statement echoes Campisi’s belief that “the world we now live and work in has zero tolerance for bullshit.”

"The world we now live and work in has zero tolerance for bullshit."
Leslie Campisi, CMO, Anthemis Group

Given the importance of transparency in this modern marketplace, some crisis experts called State Street’s judgment into question, especially since the company—or at least some at the highest levels—launched Fearless Girl with the knowledge that this case would eventually come to light.

“In my opinion, they snatched defeat from the jaws of victory, and it potentially could have been avoided,” said Steven Weiss, president of New York’s Weiss Strategic Communications. “They knew five years ago about the Department of Labor’s audit long before the debut of Fearless Girl, and they’ve known about the results since March 31, 2017. I do think this tarnishes their brand and it raises some issues about their integrity.”

So what should State Street and other companies looking to promote gender equality do moving forward?

“They can still use this as an opportunity to acknowledge that, even though they disagree with the Department of Labor’s findings, they are committed to doing everything necessary to pay fairly based on merit and not gender or skin color—and they could still do that without admitting anything,” offered Weiss, whose prescription was very close to the path State Street has chosen. “But perception is reality in the world we are looking at.”

Hegewisch of the Institute for Women’s Policy Research said the best practices for preventing discrimination have been well-established for at least 30 years, with consistency and fairness being key. “If you follow some haphazard method, you just created chaos in the compensation system.”

“I think the [Fearless Girl] campaign was one initiative that was more successful than anyone thought,” she said. “It just shows you need to be vigilant on these policies and, to some extent, address past actions you are now trying to prevent. On the other hand, the people who were underpaid were underpaid.”

@ktjrichards katie.richards@adweek.com Katie Richards is a staff writer for Adweek.
@PatrickCoffee patrick.coffee@adweek.com Patrick Coffee is a senior editor for Adweek.