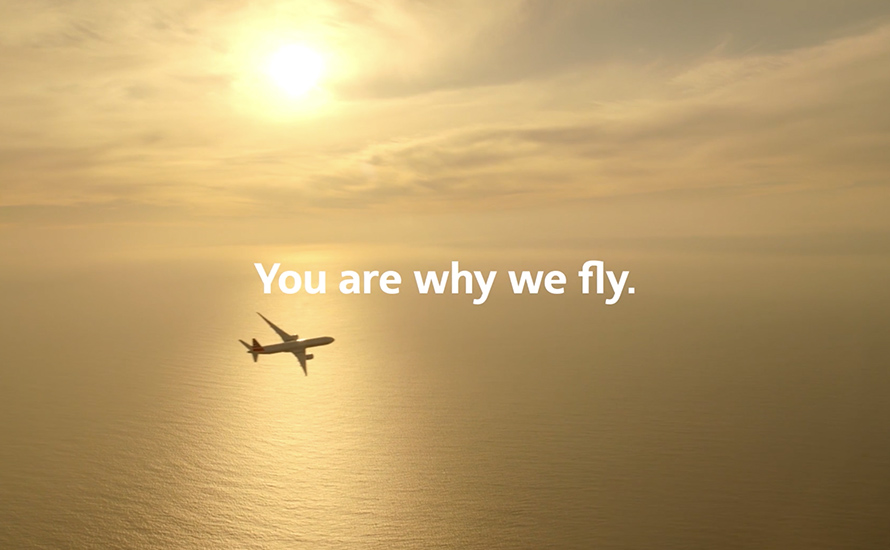 "You Are Why We Fly" highlights American's crew as they work through the pandemic. - Credit by American Airlines

With so many domestic and international travel restrictions in place, not many airlines are advertising right now. In fact, travel advertising spend dropped 90% in March, without much light at the end of the tunnel.

Instead, airlines have turned to their own social channels for brand messaging, reminding their loyalty program members—and potential customers—how clean their airplanes are, what they’re doing support Covid-19 relief efforts and spotlighting their talented pilots.

We all share one big beautiful sky. ???? For a brief minute, let us transport you to the clouds with Rhapsody in Blue performed by United Captain Beau B., set to footage provided by our employees from their previous travels. #UnitedTogether pic.twitter.com/g2XlMX0nnh

American Airlines took a more stylized approach. On Tuesday, the airline released a television-quality ad called “You Are Why We Fly” aimed at commending its staff, complete with gloved and masked flight attendants as well as the user-generated content that’s become omnipresent in almost every Covid-19 ad.
The ad is notable not only because the airline launched it a week after receiving nearly $6 billion in a federal bailout, but no matter how effective, it won’t encourage air travel. But that’s not the point.

“It’s important for strong brands to show up not just when there are blue skies, but often when times are difficult,” said Janelle Anderson, vice president of global marketing at American Airlines. “This message is equally about reminding them how much we appreciate [American Airlines workers]. They come to work in a pandemic every day because they know they’re essential to our customers, the American economy, and the world at large.”

While most of the ad is user-generated content, including some footage shot by American staff, the airline also used a “bare-bones” crew to shoot original content for the advertisement at John Wayne Airport in California as late as last Friday. The entire ad took about a week to produce, from strategy to release.

April was supposed to be a major month for American, with a brand refresh for the airline, but those plans have since been shelved for the foreseeable future. When asked what marketing for an airline would look like once travel restrictions begin to loosen, Anderson said that in the short term, there could be an emphasis on customer experience and the travel journey, as travelers may still want to socially distance themselves in the airport lounge or in the skies.

“What’s your short-term food and beverage offering? How do you think through that, what are people comfortable with? Will there be a time like restaurants where we’ll remove some of the chairs?” said Anderson. “We know as an airline we’re going to have to do things to reassure people that it’s safe.”

For now, the ad will not run on traditional media, and Anderson said though the message was “appropriate” for that arena, the airline was primarily using it to support its own channels.

“As a marketer, we must lay that foundation for the future all the time,” Anderson said. “How do you become the airline people want to fly as we come out of this?”