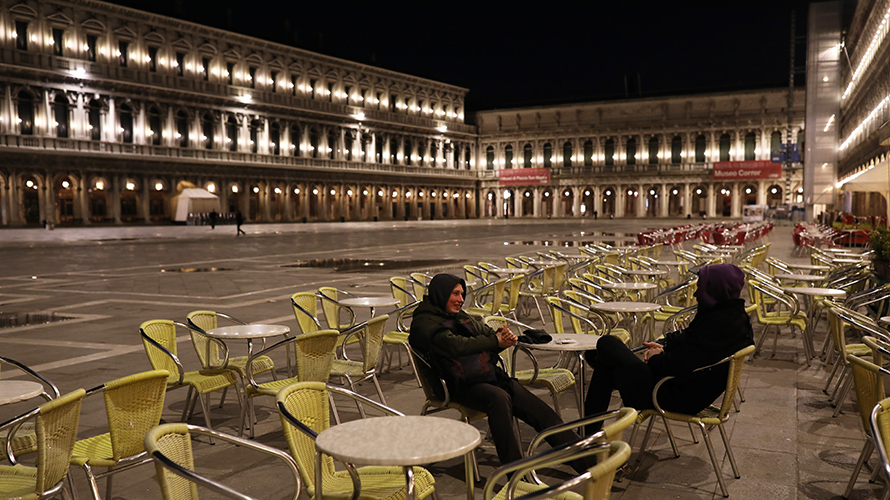 As the novel coronavirus, COVID-19, continues to spread across the country, President Donald Trump announced on Wednesday the implementation of a travel ban, preventing European nationals from visiting the United States.

Airlines, hotels, and cruise carriers have already been suffering from the outbreak of the virus around the world, but the ban of European travelers to the U.S. threatens harm to numbers of other industries, including hospitality, food service, retail and entertainment. Frances Kiradjian, founder and chair of the The Boutique & Lifestyle Leaders Association said that the World Travel and Tourism Council estimates that 850,000 people would be visiting the U.S. from continental Europe during this period.

“It’s going to have a ripple effect across the board,” said Jonathan Treiber, CEO of offer management platform RevTrax. “Anything that is tied to tourism, major cities and local economies with regard to restaurants, entertainment, tourism and tourist attractions is going to be affected.”

The impacts on businesses have the potential to be extensive. Western Europe represents the region that sends the most visitors to the U.S. annually and in 2019, over 14.5 million Western European nationals visited the U.S., according to the National Tourism and Trade Office. And when they arrive, they see shows, stay at hotels, dine at restaurants and shop at stores. Treiber predicts that those businesses are poised to take “a huge hit.”

“It’s really hard for anyone to know what are they supposed to do?” said Bob Phibbs, CEO of the New York-based consultancy The Retail Doctor. “Are retailers supposed to close down for two weeks? There’s no clear direction for us.”

Luxury retailers stateside have already been hit by the sharp decrease in Chinese visitors to the United States, Phibbs said. Though perhaps not quite to the same extent, European travelers, who find that the favorable currency exchange rate, often arrive stateside ready to shop.

In the meantime, Phibbs said that businesses can take steps to reassure customers, such as having retail workers wear gloves, stores providing hand sanitizers for employees and continuing positive messaging that all customers can receive.

Hotels, of course, will also be impacted by a smaller number of visitors—beyond the European travel ban, trepidation around travel is at a high, which is resulting in lower-than-normal occupancy rates. Seattle, which has seen some of the highest rates of infection of any U.S. city, is seeing average hotel occupancy rates of 52%, and restaurants report being about 40 to 45% full.

“Travel is sort of changed forever in some ways,” said Kiradjian. “And in other ways, through the end of the year, people are going to be very cautious about leaving their homelands and not being allowed back in.”

Kiradjian said that as occupancy rates continue to drop, hotels need to prioritize the services they offer to consumers beyond rooms for the night, such as hotel restaurants and spas. She also recommends staffs banding together to get creative on finding solutions in these trying times.

“The time is now to really take your staff and strategize and make everyone in your hotel a part of it, from the doorman to housekeeping,” she said. “Everybody’s got idea and everybody’s interested in keeping their job. Whatever that takes, now is the time to really focus on it.”

However, what Treiber said about the European travel ban does clear up some of the mystery surrounding this situation. Rather than speculating over a potential lack of customers due to fears over international travel, businesses are now armed with a certain level of knowledge that can help them to prepare for the future.

“The travel ban provides some certainty to the hotels, where even though it’s bad news now that there are zero European travelers allowed into the states for a month, it certainty nonetheless,” he said. “When chaos ensues, one of the most dangerous parts is the unpredictable nature of it, all the different scenario planning that businesses need to do.”

Of course, as the strength of the reaction to the coronavirus continues to grow, with everything from Disney World to the NCAA March Madness tournament shut down or canceled, the threat to many industries (outside of grocery and cleaning supplies) continues to grow. The lack of European visitors is just a sliver of the overall issue businesses are facing.

“The bigger issue is consumer confidence and widespread panic,” said Kodali. “European flights are only going to be bringing a small group of consumers to the U.S. who would spend here. Europeans may be on similar lockdown to Italy soon and that will just depress spend overall other than with grocers which will do really well.”