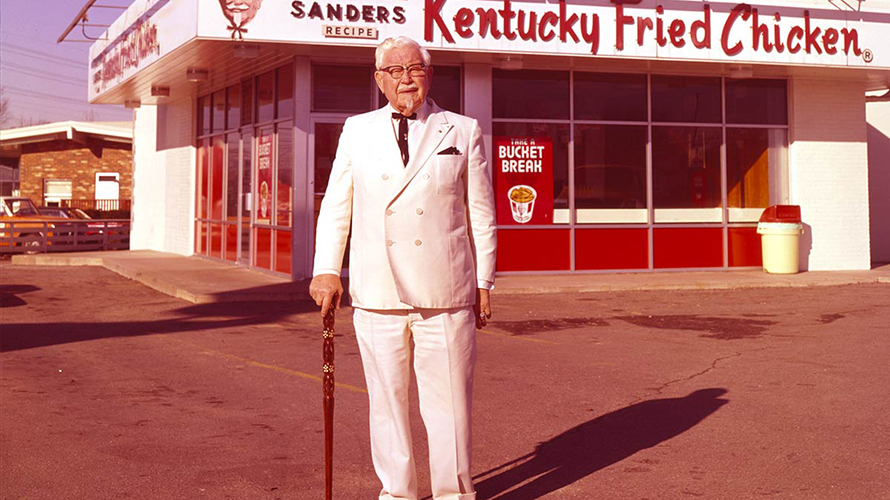 Colonel Sanders was a 'relentless salesman' back in the day. - Credit by KFC

The sometimes goofy, sometimes odd interchanging celebrity Colonel Sanders bit that Wieden + Kennedy has been running for KFC since May 2015 was actually inspired by strange marketing that Colonel Sanders himself ran during the brand’s heyday. Harkening back to KFC’s origins has not only revamped the beleaguered brand’s image but significantly boosted its sales.

KFC had a roughly two-decade track record of decline and from 2007 to 2013 it lost about 40 percent of its business via same-store sales declines and closing stores. After implementing the W+K campaign KFC has seen “12 consecutive quarters of same-store sales growth and we’re on track for 13 and 14th,” Kevin Hochman, president and chief concept officer for KFC in the U.S., told the audience at the ANA’s Masters of Marketing conference in Orlando, Fla.

Brand consideration is also up: Eight percent of people 35 and older and 40 percent of millennials are more likely to consider eating KFC again. “That’s a huge foreshadow for what’s to come because we’re making the brand young again,” said Hochman.

To get there the brand had to figure out what it was doing wrong and why it wasn’t resonating.

It had changed its name from Kentucky Fried Chicken to KFC to tell people it had more than just fried chicken. “It had the unintended consequences of telling customers that we aren’t proud of our brand and it created urban legends that we can no longer say the word chicken, that we had to abbreviate it legally,” said Hochman. “I have family members—there are probably people in this audience—who think we don’t sell real chicken.”

“Another issue was that we walked away from the Colonel,” Hochman continued. “We’re bleeding young people and so, [we started thinking] why are we showing an old guy in our marketing? We then did what most marketers would do: Mirror marketing. Let’s show young, healthy, attractive people eating our chicken.”

After realizing that approach wasn’t working the brand picked a new agency, tapping W+K. “The first thing that we did was go to the KFC archives,” explained Eric Baldwin, ecd for W+K. “It’s in an actual cave in Kentucky.”

“After this initial deep dive, we quickly learned that Colonel Sanders was a master Jedi of branding,” said Baldwin. “Everything he did was very intentional: His white suit, his black string tie, he even dyed his mustache and goatee white to match the suit and his hair—he did that because when KFC started TV was black and white and he was smart enough to know that white stood out a lot more on black and white TV.”

Baldwin continued: “We found out that the Colonel was a relentless salesman and that he would use any occasion to sell chicken. He was really modern in his approach because he would find really niche corners and push into them.”

W+K found an LP with some old radio recordings the Colonel had done: “Hi folks, it’s celestial boating season, why not enjoy some Kentucky Fried Chicken?” The agency wasn’t sure what celestial boating season was but liked the idea that Colonel Sanders was diving very deep into a specific genre. “That was pretty modern and ahead of its time,” said Baldwin. “He was selling chicken with everything from records to Halloween costumes.”

“The Colonel [created] tons of ephemera,” said Baldwin. “We wanted to follow that tradition where we could create an [online] store where we could sell items and keep the Colonel in pop culture, so you could see someone walking down the sidewalk wearing a T-shirt with him on it and get hungry for chicken.”

Colonel Sanders was 65 when he started KFC; at 75 he was one of the most recognizable men in the world, noted the agency. “Colonel Sanders wasn’t a made-up mascot, he was a real person,” said Baldwin. “Like James Bond or Batman, the Colonel’s feisty personality was just too big for one person to play. So we decided to employ a strategy of a rotating cast of celeb Colonels. This did two things for us: Generate buzz every time we got a new Colonel and also helped draw attention to a product that people hadn’t paid attention to in a long time.”