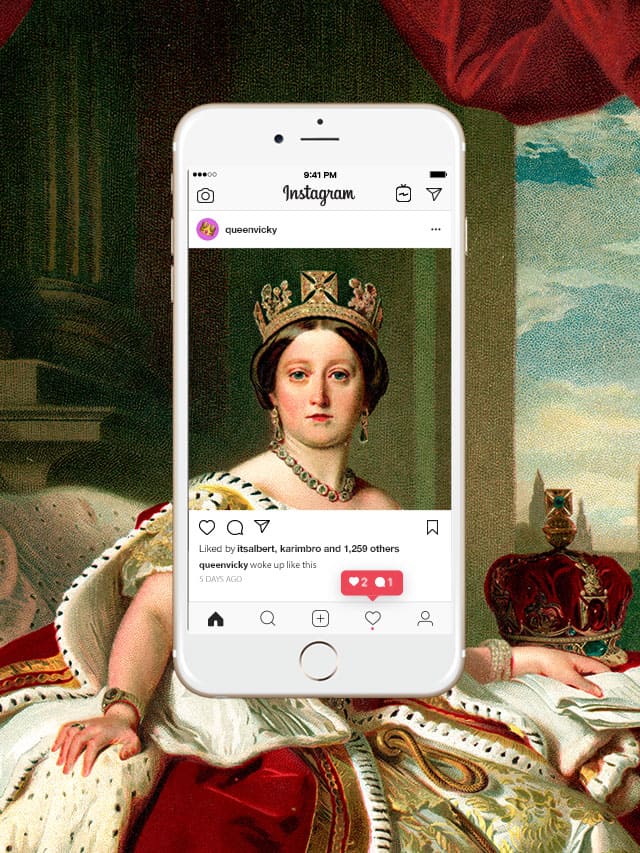 Nothing says influence like giving your name to an entire era. More than a century after the sun finally set on Queen Victoria’s remarkable 63-year reign, her name remains a byword not just for a time period but a set of values and cultural expectations.

And if Victoria is still influencing us today, her impact during her lifetime was even more prodigious. Her savvy embrace of the new technology of photography turned her into a fashion trendsetter. When she became an early adopter of chloroform to ease the pain of childbirth, the American Medical Journal called it “an event of unquestionable medical importance.”

It’s been a phenomenal run in staying relevant, with a number of surprisingly useful lessons for modern marketers. Here are three to consider.

An influencer’s number one client is always themselves

Influencers are influencers because they’re phenomenal self-promoters. Some are in it for ego, some for money and most of them for both. For Queen Victoria, it was literally to help save her job.

Crowned in 1837, she inherited, in the words of the BBC, a “monarchy tarnished by the extravagance of her royal uncles.” In fact, it wasn’t a done deal that the British monarchy would continue due to a growing concern with violent revolutions overthrowing equally ancient regimes across Europe. Seeking to avoid a similar fate, Victoria went big on charm, becoming a prolific supporter of a variety of institutions, causes and charities.

In an era when audiences have an ever-increasing ability to simply opt out of ads, influencer marketing as a vehicle for forming effective consumer relationships is only going to grow.

For modern marketers the equation is similar. It’s not just what an influencer can do for your brand, it’s what your brand can do for the influencer. The more an influencer has to gain from a brand relationship (beyond getting paid), the more committed and effective they are likely to be. Perhaps more than any other marketing tactic, influencer marketing needs to be a value exchange as much as a financial agreement.

Partner with influencers who are true fans of your product

Effective influencer marketing thrives on authenticity. And with increasingly strict disclosure rules, this is only becoming more important.

Among Queen Victoria’s many successful endorsements, her use of chloroform to ease the pain of childbirth can be seen as something of a case study for a new product launch. Seeking to drive enthusiasm for the procedure, chloroform champion and doctor John Snow set his sights on convincing Victoria, who was known to hate childbirth, to allow him to administer the drug for the birth of her next child. When she agreed, the success of the resulting procedure led to a public fervor for painless childbirth, silencing critics of what had been a contested practice and making it the standard of care.

Today’s influencers don’t exist in a vacuum, meaning that just because they’re paid to endorse products doesn’t mean they can’t be actual fans off the books. Take Skittles’ tie-up with notoriously quiet NFL running back Marshawn Lynch as a particularly illustrative example. Known for snacking on Skittles on the sidelines, the brand got smart a few years back and put him on the payroll, leading to, among other things, one of the most surreal (and amazing) home shopping activations ever.

Welcomed to the show with a, “We couldn’t talk about Skittles without talking about you,” Lynch lays out the right way to eat Skittles, discusses the flavors and receives a Skittles-encrusted ring from the host. It’s the type of authentic passion that’s hard to engineer and shows why, if you’re going to pay someone to “like” your product, you should go with someone who can be sincere.

Influencers are better at influencer marketing than you are

At the ripe old age of 11, Victoria was shown a document listing the line of succession to the British crown. Realizing her place as heir presumptive, she is reported to have paused for a moment and then said, “I will be good.”

Just like Victoria, most modern influencers have a certain swagger. Of the billions of people out there scrambling for attention, they’ve successfully broken through, building an audience invested in what they think, say and do. It’s useful to keep this in mind when structuring influencer deals. Rather than simply scripting out what you would like them to do, enlist them in the process. As experts in building compelling narratives, they may have better ideas for selling your brand to their audience than you do. And the more autonomy you give them, the more invested in the work they become, ultimately leading to more engaging and effective output.

In an era when audiences have an ever-increasing ability to simply opt out of ads, influencer marketing as a vehicle for forming effective consumer relationships is only going to grow. By aligning brand success with influencer goals, partnering with naturally congruent personalities and then empowering them to do great work, marketers can create their own Victoria-sized moments.