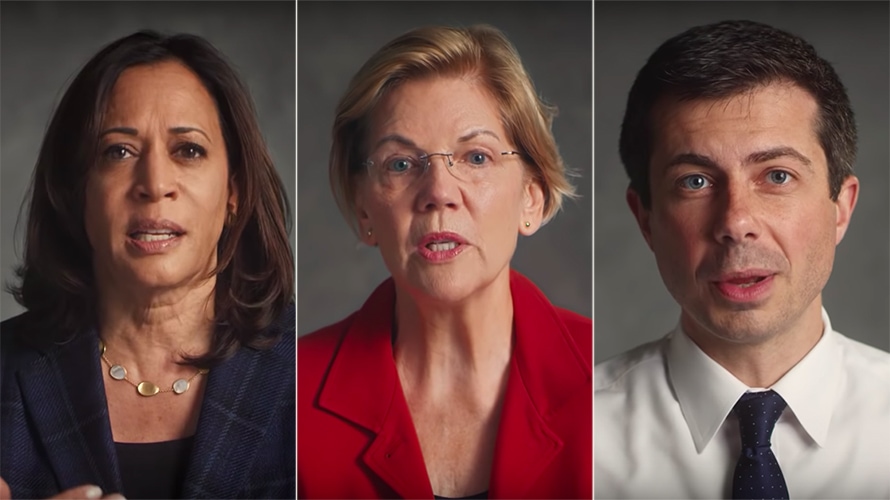 From left, Kamala Harris, Elizabeth Warren and Pete Buttigieg are among the candidates appearing in the ad. - Credit by Provided

With presidential primaries kicking off in less than six months, this is a high-pressure moment for Democratic hopefuls looking to secure their party’s nomination to run against President Donald Trump in 2020. So while they’ve generally been unified on big-picture priorities, it’s rare to see them sharing the spotlight—especially in an ad.

But through their mutual support of the Giffords organization—named for former U.S. Rep. Gabrielle Giffords, who survived an assassin’s bullet in 2011—eight of the candidates have united to create a long-form ad about the importance of electing a president who will make addressing gun violence in America a priority.

“Our ‘Gun Safety President’ campaign frames a critical and historic choice for our nation,” Giffords wrote in a statement about the video launch. “We can continue with the corrupt leadership of Donald Trump, who has taken millions from the NRA while opposing gun safety policies—or we can forge a new path and elect a gun safety president who’s willing to stand up to the gun lobby and protect our kids and communities from gun violence.”

Americans face a historic choice in 2020: Do we accept four more years of a Trump presidency, or do we elect a leader with a plan to make us safer?

I’m proud to see so many friends running to be a #GunSafetyPresident. Listen to their message to America. https://t.co/uO4eyfjx2s

The ad was described as the first in a campaign that will unfold in the months ahead to “frame the general election as a referendum on gun safety.”

Backed by what the organization describes as a “six-figure ad buy,” the #GunSafetyPresident video will largely be targeted at key voters, including those watching this Thursday’s Democratic debate—the first to feature the 10 top-polling candidates on stage together.

While the video has generally been greeted warmly by supporters of the many candidates, with 20 Democratic hopefuls running for the party’s nomination, there’s bound to be some consternation about the lack of representation across the entire candidate pool.

Supporters of Andrew Yang, who has posted a lengthy set of gun control policies and priorities on his campaign website, are asking why their candidate wasn’t included.

“Leaving Yang out only ensures that I’ll vote for him,” wrote a YouTube commenter, one of many who posted about Yang’s absence on the video. “Refuse to have my hand held by lying corporations with dubious intentions.”

Yang will be one of two candidates featured on stage at Thursday’s debate who was not in the Giffords video, with the other being former Secretary of Housing and Urban Development Julián Castro.