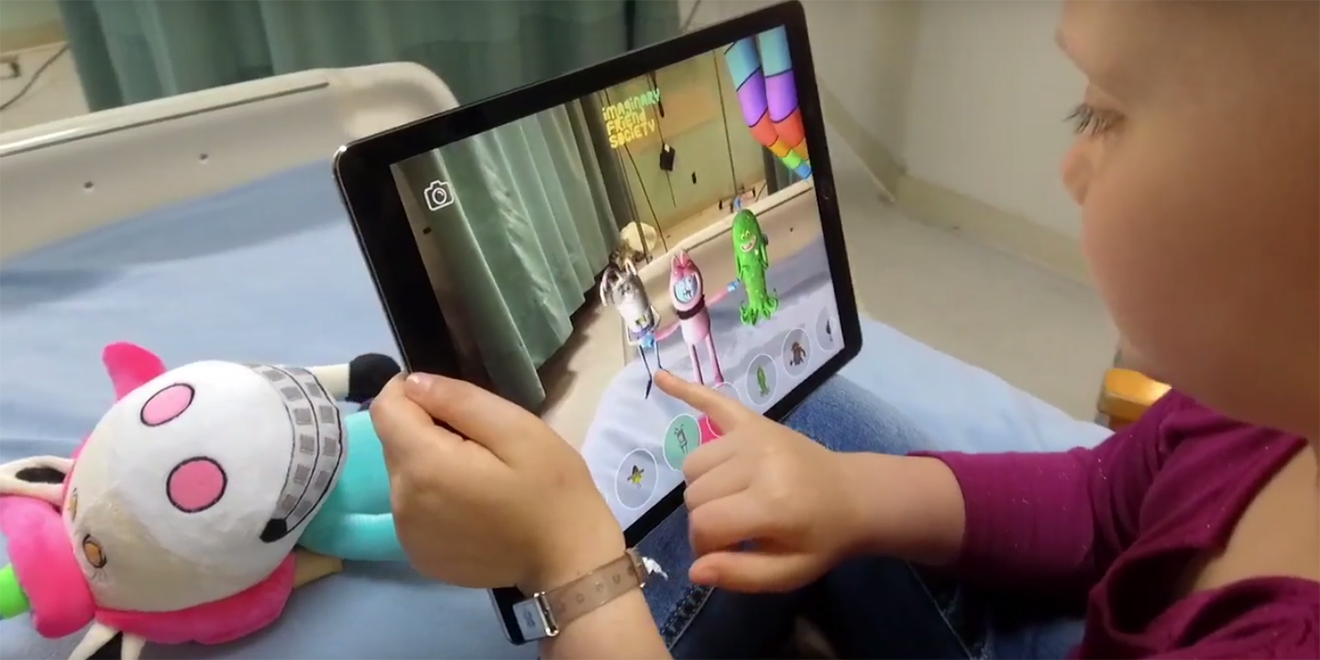 For kids battling cancer, the relentless litany of medical tests, treatments, symptoms and side effects can be both confusing and demoralizing.

A fun new augmented-reality mobile app from the Pediatric Brain Tumor Foundation and agency RPA aims to address both of those points by helping educate and lift the spirits of the 300,000 children diagnosed with cancer each year.

A continuation of a campaign launched last year, it features a cast of animated characters—The Imaginary Friend Society—offering upbeat words of encouragement to users.

Kids can pop open the app on a tablet in the hospital, for example, and get a quick pep talk from a lanky, three-eared talking rabbit wearing big eyeglasses and a bow tie.

“You’re stronger than you know,” it says. “I wish I was that strong.”

There’s a pink-haired flying unicorn with a rainbow horn and a singsong voice. There’s a toothy green moss-monster grinning supportively as flowers sprout from his head. There’s a robot, a dinosaur, a happy slug, and a bird in a sombrero.

The nonprofit and agency first introduced the characters in September. They came along with a series of animated films designed to help kids understand their diagnoses and treatments.

A “What is Cancer?” video, for example, features a parrot pirate captain explaining how a body is filled with tiny cells, and that bad ones can sometimes turn on the good ones—like a mutiny on a ship.

The new app, created with production company Tool of North America, trades some of the depth of the earlier narrative work for the ability to play with the characters in real time—bringing them to life as a powerful toy that the marketer hopes can allay some of the anxiety prevalent among children who are cancer patients.

“Each day, 13 children and teens are told they have a primary brain or central nervous system tumor,” says Robin Boettcher, president and CEO of the Pediatric Brain Tumor Foundation. “The PBTF is committed to helping them thrive. One way to do this is by giving kids confidence and courage when they need it most.”

Adds Dr. Mark Krieger, chief of neurosurgery at the Children’s Hospital in Los Angeles, “This AR experience can transform the experience of kids while they are being treated at the hospital just before MRI scans, shots or surgery and help them find some cheerful reassurance when they are anxious or overwhelmed by their feelings.”

It’s also a great way to draw renewed attention to the animations launched last fall—a valuable primer on what cancer patients face, and for grown-ups, how to talk about it with kids.

Those videos are served up bedside via touch screens in select children’s hospitals around the U.S., as well as some abroad.

“We want to help as much as we can,” says Jason Sperling, svp of creative development at RPA. “The videos were just the first step. Now we’re leveraging the characters in a way that is even more vital to kids, at a time when they need them most.”