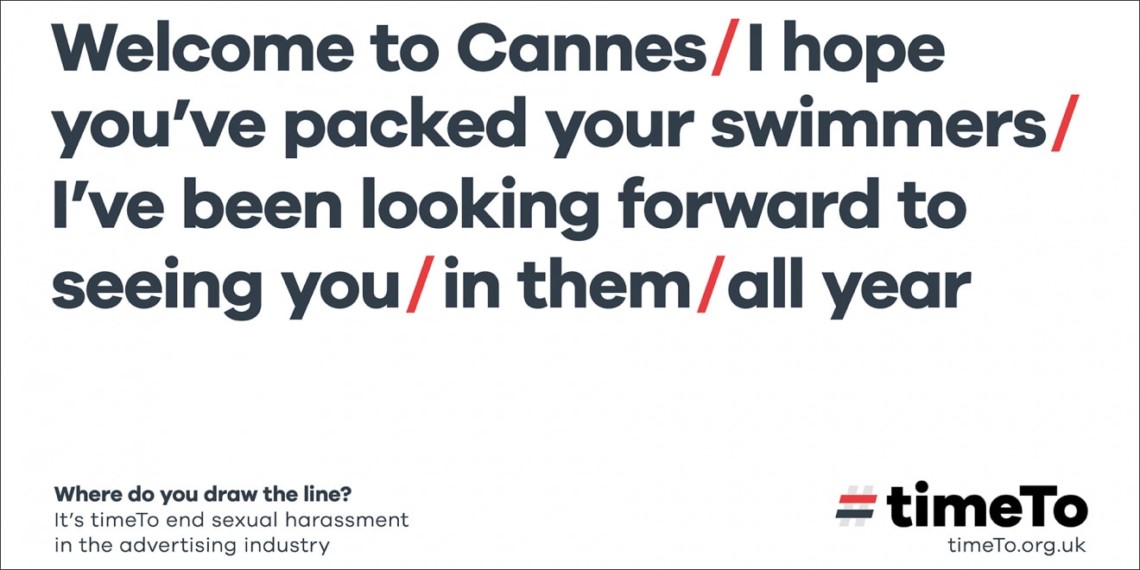 The ads, created by agency Lucky Generals, continue the timeTo campaign launched in 2018. - Credit by timeTo

The Cannes Lions is an exciting time for those lucky enough to attend the creative festival each year, but as the #MeToo movement has illustrated in recent years, such events that blur the lines between work and fun can also become a backdrop for potential sexual harassment.

Those attending this year will be reminded of this stark reality when they land in nearby Nice, France, where ads in the airport present the some of the many ways that sexual harassment can work its way into everyday interactions. The ads feature hypothetical conversation starters that a female employee could easily find herself on the receiving end of, all of which have sexual undertones. Each is punctuated with red lines throughout to reinforce the campaign’s message: “Where do you draw the line?” 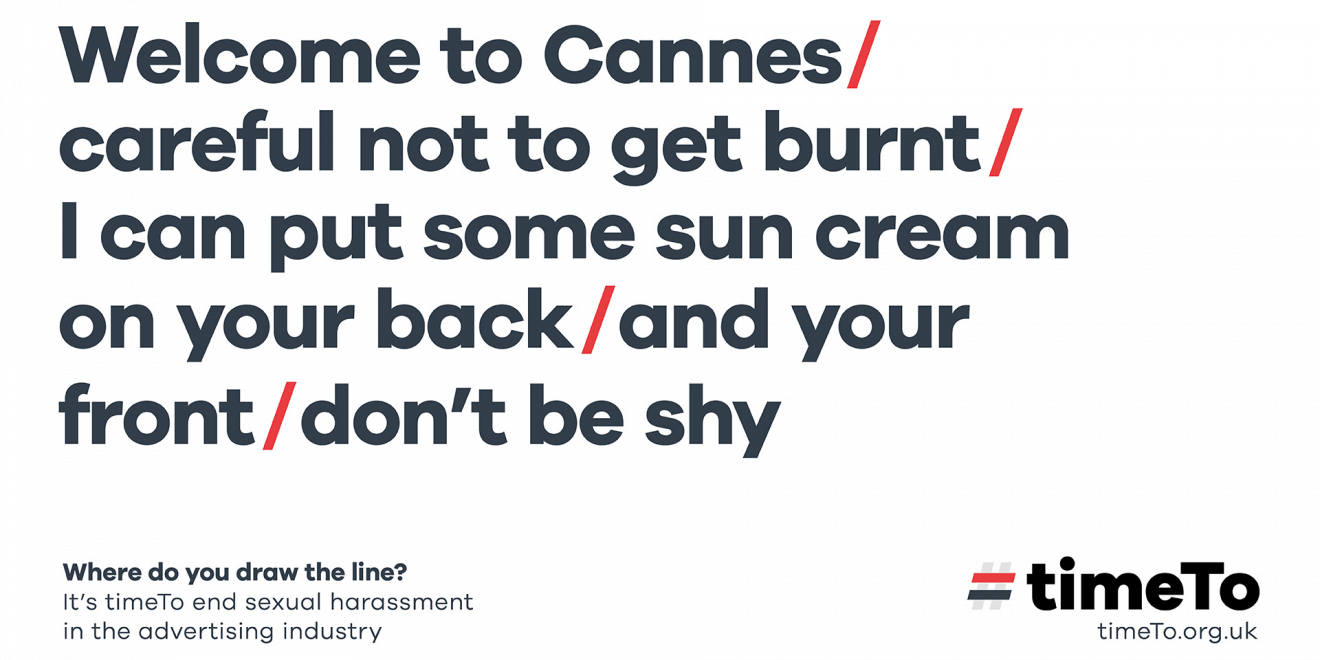 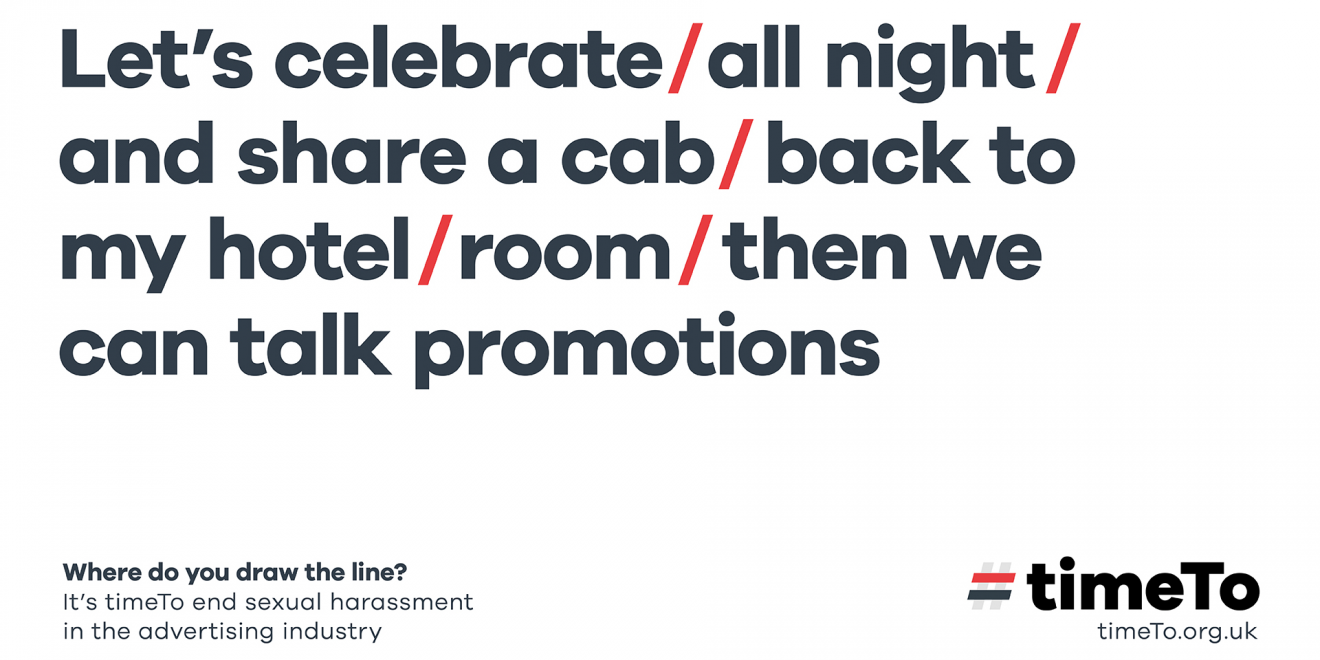 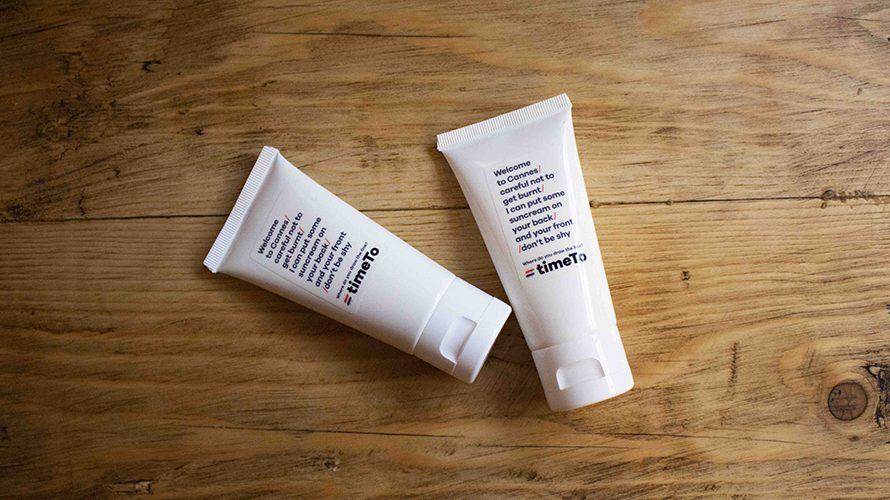 Created by Lucky Generals, the effort comes courtesy of timeTo, a U.K. organization that was formed last year by three trade bodies: Women in Advertising and Communications, London, the Advertising Association and NABS, a charity for the advertising and media industry. Since its formation, timeTo has received support from more than 100 agencies.

In addition to its airport advertising, the campaign includes a video in which viewers see a woman being pressured by her male colleague to share a cab with him back to his hotel. The organization will also be handing out branded sunscreen at different locations to festival-goers.

“We know alcohol, evening events and travel away from home are our highest risk areas. Cannes is a unique industry moment where we see the best of creativity the industry has to offer alongside some of the most appalling behavior,” said Helen Calcraft, founding partner of Lucky Generals, in a statement. “This is an industry spotlight moment for us to efficiently and effectively resurface debate post launch, raise further awareness and directly impact behavior. We need everyone to consider where they draw the line at Cannes.”

To support the effort, Cannes Lions parent company Ascential is providing digital signage in the Palais for timeTo to display its messaging throughout the week.

In October, timeTo unveiled its first campaign, which includes three videos based on real-life situations that show examples of sexual harassment unfolding. The effort was born out of troubling statistics from timeTo’s research, like a report that found that 34 percent of women and 9 percent of men in the industry have been sexually harassed at work.