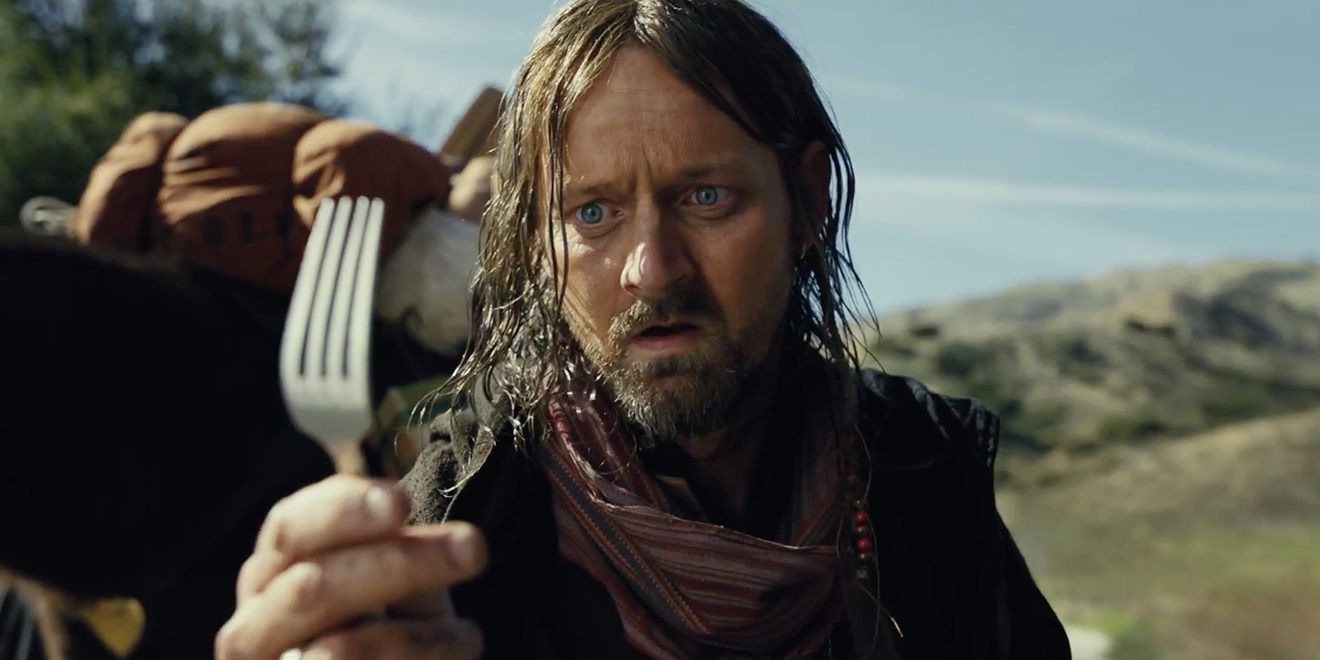 Medieval fantasy tropes are enjoying a pop-culture moment these days. IHOP is the latest to jump on the bandwagon, with a humorous commercial about a neurotic wanderer and his horse.

In the new :60 from Droga5, the bearded man—who looks something like a washed up Vigo Mortensen, complete with greasy hair and a ragtag cloak—stumbles upon a literal fork in the road. He bends over to pick it up, and proceeds to obsess over whether to eat “pancakes and pancakes” for breakfast, or whether to “omelette some omelettes.”

The dilemma quickly causes him to spin out—until the camera cuts back to reveal the oddball isn’t in Middle-earth after all, but really, somewhere in suburbia.

“Hey,” shouts a man, wearing a blue polo and khaki shorts while wielding a garden hose. “Just go to IHOP—they have all kinds of omelets that come with pancakes. You don’t have to choose.”

It’s a willfully absurd conceit, an appropriate followup to the airplane pilots who can’t stop saying “pancakes” in the agency’s first work for the brand, which launched last month. It also can’t but evoke the Bud Light “Dilly Dilly” campaign, though both are riding the wave of general Dungeons & Dragons style enthusiasm spawned by Game of Thrones.

“The campaign was created based on the consumer insight that the combination of omelettes plus pancakes [sweet and savory] was very motivating for customers,” says background from the agency, which also describes the commercial’s tone as “irreverent and eccentric.”

The main character does, in fact, seem eccentric and motivated for both pancakes and omelettes, so in that respect, the ad—directed by David Shafei through production company World War Seven—seems to have succeeded, even if it feels a bit forced.

The wanderer tries to throw the helpful stranger a bag of something for his “trouble.” Presumably it’s not as valuable as actual gold. But like all good comedy, the spot saves the best bit for last. “Don’t leave that horse,” says the local homeowner, futilely, as the wanderer beelines for breakfast, abandoning his ride in the middle of the road, along with the fork.