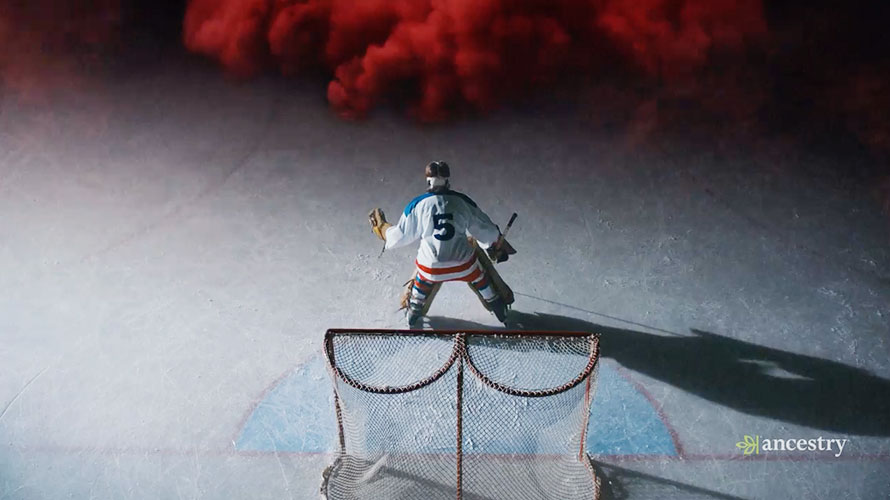 On the eve of the Winter Games in PyeongChang, South Korea, five members of the “Miracle on Ice” 1980 gold-medal-winning U.S. men’s Olympic hockey team reunite for an Ancestry.com ad, reminding us that, in America, “Greatness Comes From Everywhere,” because our ethnic heritage is so diverse.

Dave Christian, Mike Eruzione, John Harrington, Rob McClanahan and Buzz Schneider don’t actually appear in the 60-second spot from Droga5, which consists of stylized footage designed to capture the power and passion of the game and achieve an archival effect.

Instead, the players provide the narration, recalling their improbable upset of the dominant Soviet team 38 years ago. Schneider calls that victory, en route to a final-round win over Finland, “the greatest upset in American sports history.”

“We were more than American…” Harrington says.

“I never realized we were from all over,” adds Schneider.

It’s unclear who voices the cheeky kicker: “I didn’t know I was part Russian.” In fact, the five guys had their DNA tested through Ancestry, and the results showed that three of the players have Finnish/Northwest Russian roots, while two others can trace their heritage back to the Caucasus.

Schneider concludes: “And we all came together as one. That’s what made us champions.”

“With so much attention on American pride and athleticism during this time of year, we took a step back and came up with a creative idea that gets to the heart of where American sports heroes really come from, and what really makes them so great,” Ancestry CMO Vineet Mehra tells AdFreak. “We feel that this moment of great national pride is the perfect opportunity to spotlight the importance of unity and inclusivity, and encourage people to look into their own greatness, too.”

This is a medal-winning idea, stirring but not schlocky, and in keeping with Droga5’s other efforts for the client.

Still, some viewers might award the execution silver or bronze instead of gold. The speakers are never identified, and we’re provided with no information about their Carter-era triumph at Lake Placid. It’s not even clear we’re talking about the Olympics here. Are 38-year-old hockey heroics that well remembered? A big swath of the audience wasn’t even born at the time. (The ad won’t actually run during NBC’s PyeongChang coverage, further limiting context.)

All of this makes the historical set-up kind of vague. A few quick words of explanation flashed on screen would have worked wonders. OK, it’s not an official Olympic commercial … but still.

All that said, the underlying concept—the ad’s DNA, as it were—is strong. The mix of narration and visual storytelling still scores. So, the commercial achieves its goal, explaining just enough to deliver a thoughtful, timely message.

“We’re aiming to reach all Americans,” Mehra says. “We hope it resonates with and encourages people to explore their own ethnicity and look at the U.S. and its greatness in different ways.”