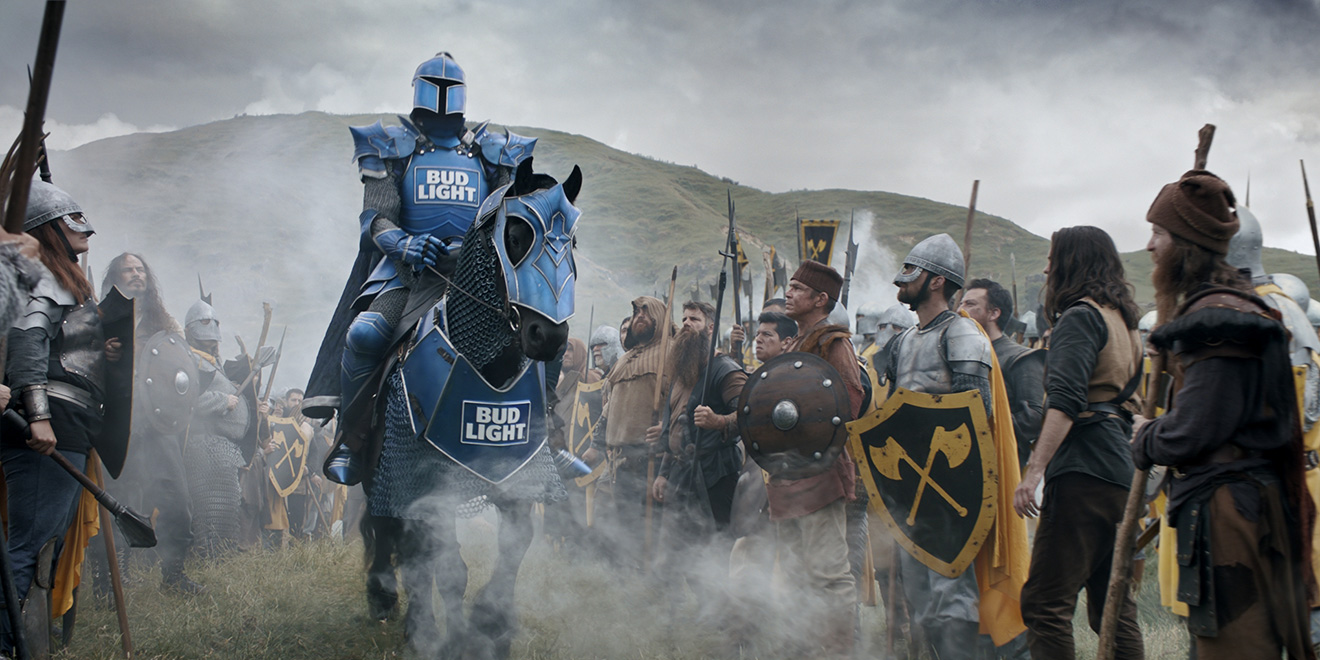 The Bud Knight became an unexpected star for the brand. Bud Light

Super Bowl advertising is often about going big, and Bud Light does so literally with its latest “Dilly Dilly” spot, a 60-second ad that broke online Thursday and will air in the second quarter of Sunday’s Super Bowl LII on NBC.

The new spot picks up where the last one, “Ye Olde Pep Talk,” left off. (A 30-second version of “Pep Talk” will air in the first quarter of Sunday’s game, for those who’ve been living under a medieval rock.) The king and his ragtag band of subjects are badly outnumbered, and outclassed, in a battle against some invaders. But they have an ace in the hole—the giant and imposing Bud Knight, who appears on a hilltop out of nowhere, resplendent in Bud Light-branded armor, as though sent from the heavens.

He will save the day, right? Well, unless he’s got plans with his buddies.

The spot—made by Wieden + Kennedy New York, and filmed in New Zealand by O Positive director Jim Jenkins—has its fun moments, from the dragon dropping the screaming soldier in the opening frames to the awkward silence as the Bud Knight fetches his 12-pack from the amusingly modern convenience store next to the battlefield.

“Dilly Dilly” itself gets just a single brief shout-out, from the same villager who’s always uttering it (played by Rory O’Sullivan), this time while taking cover under a wagon. And while largely nonsensical, the ad does deliver the deadpan one-liners, along with a supernatural hero (who fits into the campaign’s recent story arc, inspired by fantasy films) and an explosive ending.

The ad rounds out what Bud Light has been calling a Super Bowl “trilogy,” which has included “Pep Talk,” which broke in mid-January, as well as “Wizard,” which rolled out on Christmas. And it caps a remarkable run (and is surely not the end) for “Dilly Dilly” itself, the catchphrase that first appeared in an August spot, “Banquet,” before becoming a meme nationwide—growing in popularity every week, until Bud Light had little choice but to give it airtime on the year’s biggest broadcast event.

Andy Goeler, vp of Bud Light and a four-decade veteran of Anheuser-Busch marketing, told Adweek that the brand has been energized by how the public has embraced “Dilly Dilly” and how it’s crossed over into pop culture. (Everyone from Ben Roethlisberger to Colorado state legislators appear to be fans.)

“It’s captivated so many consumers,” Goeler said. “A lot of people have been waiting for the next chapter. It’s a beautiful following.”

Of course, it means little if it doesn’t help sales. In 2017, Bud Light suffered its biggest yearly volume drop ever, 5.7 percent, according to Beer Marketer’s Insights. But that comes amid sales declines for all major beer brands. And Bud Light says “Dilly Dilly” spurred renewed interest in the brand in the fall that’s visible in other metrics, which should eventually help sales too.

Bud Light provided the following data to Adweek in mid-January to show the effect of “Dilly Dilly” on certain brand metrics:

• Over 2 billion earned media impressions for the campaign to date
• A 14 percent improvement in positive sentiment related to Bud Light on social since the launch of “Dilly Dilly”
• A monthly average of 300,000 Google searches for “Dilly Dilly”
• 175,000 mentions of “Dilly Dilly” per month in social media
• 66,000 uses of the hashtag #DillyDilly on Instagram alone
• Bud Light conversation volume of 689,610 mentions in nine months prior to “Dilly Dilly,” spiking to 874,465 mentions in the four and a half months since
• A 6 percent improvement in the share of organic social mentions of Bud Light within the beer segment online—reaching 23 percent of the conversation

Goeler explained it as a three-step process—get the consumer’s attention with engaging marketing; tie the marketing to the point-of-purchase; and deliver on expectations with the product itself.

“You can create great ads, but if you’re not getting your product into people’s hands, what are you accomplishing?” he said. “First, you have to break through and make people want to engage. That’s just step one, but to see us achieving step one on this level is amazing.”

The creation of “Dilly Dilly” back in the summer is a story all its own.

Media outlets have speculated on the origins of the phrase, but W+K creative directors Brandon Henderson and John Parker told Adweek that it was dreamed up out of the blue by one of their creative teams—art director NJ Placentra and copywriter Alex Ledford.

“They insist they just came up with it. It was the first thing they laughed at when they were throwing things back and forth,” said Henderson. “I remember laughing the first time they said it, and the more I heard it, the funnier I thought it was. And then when we got to the ‘Pit of Misery’ part, I knew we had something.”