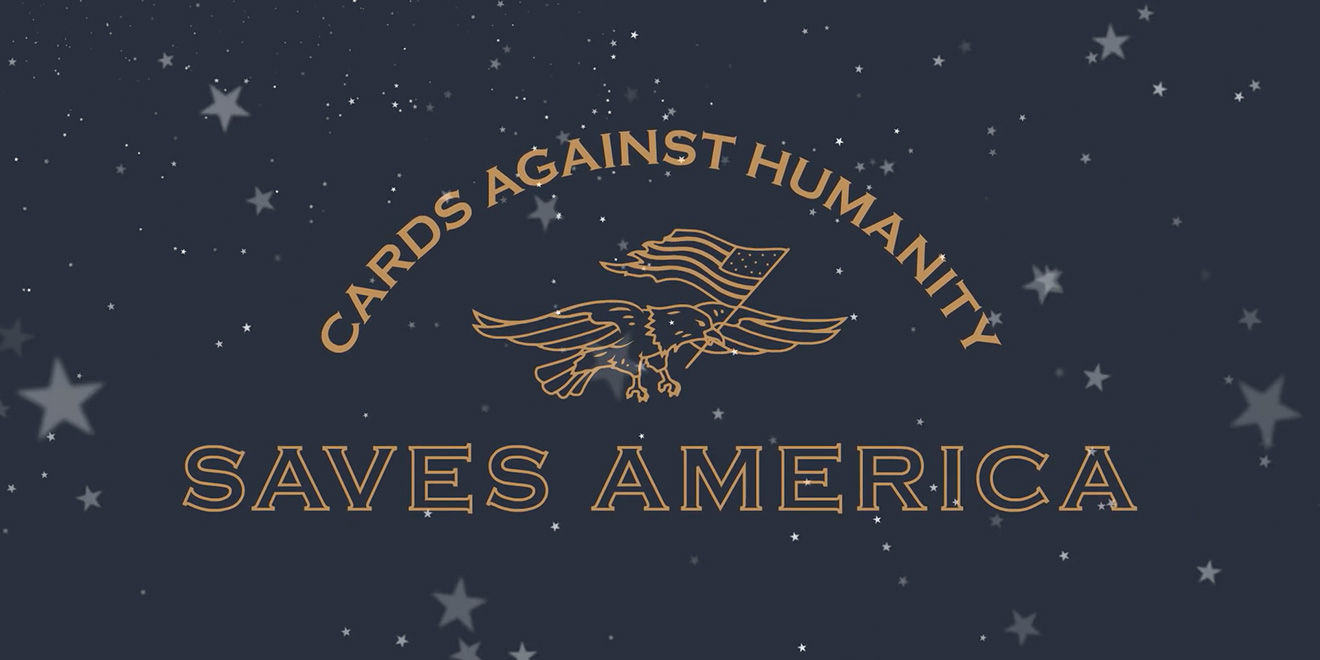 Remember that Black Friday promotion where Cards Against Humanity got a bunch of people to buy poo? What about last year’s, when it raised over $100,000 just to dig a hole?

The brand that loves to transparently waste your cash just released its latest campaign: Cards Against Humanity Saves America. And given what time has taught us, we’re taking them goddamn literally.

“It’s 2017, and the government is being run by a toilet,” the website reads. “We have no choice: Cards Against Humanity is going to save America. There’s no time for questions—now is the time to act. You give us $15, and we’ll send six America-saving surprises right to your doorstep. It will be fun, it will be weird, and if you voted for Trump, you might want to sit this one out.”

The campaign is a full-frontal attack on the current administration, specifically one of the president’s banner campaigns—building a wall between the U.S. and Mexico, which Mexico will pay for.

Here’s the ad, which is a really optimistic projection about how this is all going to go down.

“We’ve purchased a plot of vacant land on the border and retained a law firm specializing in eminent domain to make it as time-consuming and expensive as possible for the wall to get built,” explains a hilarious, give-no-fucks FAQ. “All Cards Against Humanity Saves America recipients will get an illustrated map of the land, a certificate of our promise to fight the wall, some new cards and a few other surprises.”

This isn’t the first time CAH has taken on politics or social causes. It’s been especially busy since the 2016 election: In February, the company founder sent his newest game, about Hitler’s enablers, to all 100 U.S. senators.

And in July it released Cards Against Humanity for Her, a card game that was exactly the same as the original, except pink and $5 more expensive—a wicked critique of what we, in vagina-parlance, call the Pink Tax.

Cards Against Humanity Saves America went live yesterday in a limited, five-day run. Unsurprisingly, it’s already sold out. CAH founder Max Temkin wrote on Twitter that all 150,000 slots were taken in about nine hours—good for a quickie $2.25 million fundraiser.

150,000 subscriptions sold out in about 9 hours. Incredible job by @jenndangerous and @mariaranahan organizing Holiday Bullshit this year. Thanks to @srobbin for some very lively devops today!

People who clicked way too fast on that order button, however, should lower their expectations right now. “We’d like to cancel the 2016 election, but neither of us is going to get what we want,” the company writes.

And for those who aren’t feeling the card game company’s political stance, the FAQ has this to say: “Why don’t you stick to seeing how many Hot Wheels cars you can fit up your asshole?”