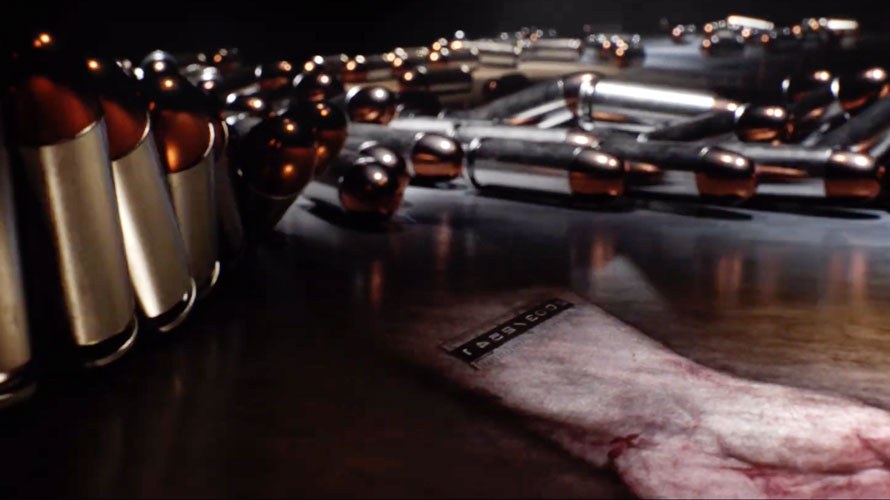 What if ammunition came with a graphic warning about the dangers posed by firearms?

Oriel Davis-Lyons and Gustavo Dorietto, two creative directors at Droga5, believe such labels could help prevent gun violence, so they created a PSA campaign to introduce the idea. The effort launches today in conjunction with National Gun Violence Awareness Day, but it’s about a year in the making.

“There’s been so much [conversation] around gun control,” Davis-Lyons told Adweek, with the same debates around the issue failing to generate action. “We thought, ‘There must be another way of looking at this,’ to move this conversation on. We started to think, rather than thinking of it purely as a gun-control issue, what if we started thinking about it like a public health issue?”

“Ammunition was the closest thing we could find as a parallel to how frequently people go back and buy [cigarettes], so to have these messages seen by gun owners felt like the most natural place for that,” he said.

“A lot of this idea was about shifting the conversation,” Dorietto added, to reach an audience resistant to gun-control measures; ammunition, they decided, was the way to reach that audience.

“The idea was born out of a frustration with that stalemate [around gun control],” Davis-Lyons said.

For the campaign’s video, “Don’t Look Away,” Dorietto and Davis-Lyons teamed up with VFX studio Method Studios on production and Sonic Union for sound design/mixing, which commissioned an original soundtrack from composer Oli Chang of Animal Feelings.

A large portion of the time spent developing the campaign went into a series of conversations with those working in gun-violence prevention, particularly public health professionals, who helped develop the approach.

“We spent a lot of time talking with various people who have been working on this issue for a long time, and the more conversations we had like that, the more encouraged we were to keep going,” Davis-Lyons said.

They also spent a lot of time on outreach and relationship building with survivors groups, which led to the image of a domestic gun-violence victim included in the campaign. Initial reactions were varied, with some taken aback by the graphic imagery.

“Because of the graphic nature of the idea, it was very new territory for a lot of people,” Davis-Lyons said. “Very few people, even people who work in gun-violence prevention, see the reality of what they’re trying to prevent. We had to find people who knew the power of these images.”

People who had experienced it firsthand, including victims and trauma surgeons, ultimately proved the most helpful in developing the idea.

This led to partnerships with Doctors Demand Action, Survivors Lead, Veterans For Gun Reform and This Is Our Lane, whose founder, Joseph Sakran, was also recently involved with FCB Health Network agency Area23 and gun-reform nonprofit Change The Ref’s “Impossible Operation” campaign.

Davis-Lyons hopes getting the idea out there will “get the public talking about it as a new solution and hopefully build momentum.”

“We would love to see proper research trials at a state level [for graphic warnings on ammunition labels],” he continued. “At the moment, we can use the research that’s gone into graphic warnings on tobacco, which has shown it has been effective, and hypothesize it could have a similar effect on gun owners. But until we are able to properly research it, we don’t know.”

Dorietto added that he hopes the campaign can “show everyone that there are other ways we can think about solving this problem. There are things we can do if the conversation isn’t budging.”

Ultimately, the campaign launch is just a first step.

“For us, this is just the beginning, and there’s a lot more work to do,” Davis-Lyons said.

Aside from pushing for research trials, he said he thinks they can do more to explain how warning labels would work.

“Hopefully what we can do next is bring the voices of the responsible gun-owners who are out there [into the conversation] a little bit more,” Davis-Lyons added. “The whole point of this idea is for it to be bipartisan and neutral. It is a public health solution.”

Davis-Lyons explained that while they’re “under no illusions of the obstacles” inherent in “any attempt at change toward gun-violence prevention” and the “well-organized, well-funded opposition” that such measures can be met with, initial conversations with responsible gun owners proved promising.

“I do think the conversation is dominated by the people and groups with the most money to spend,” Davis-Lyons said. But they’ve had conversations with people who “believe this is a crisis that needs addressing and want to see some changes that respect their rights, but reduce the amount of people out there dying due to gun violence. They are out there.”