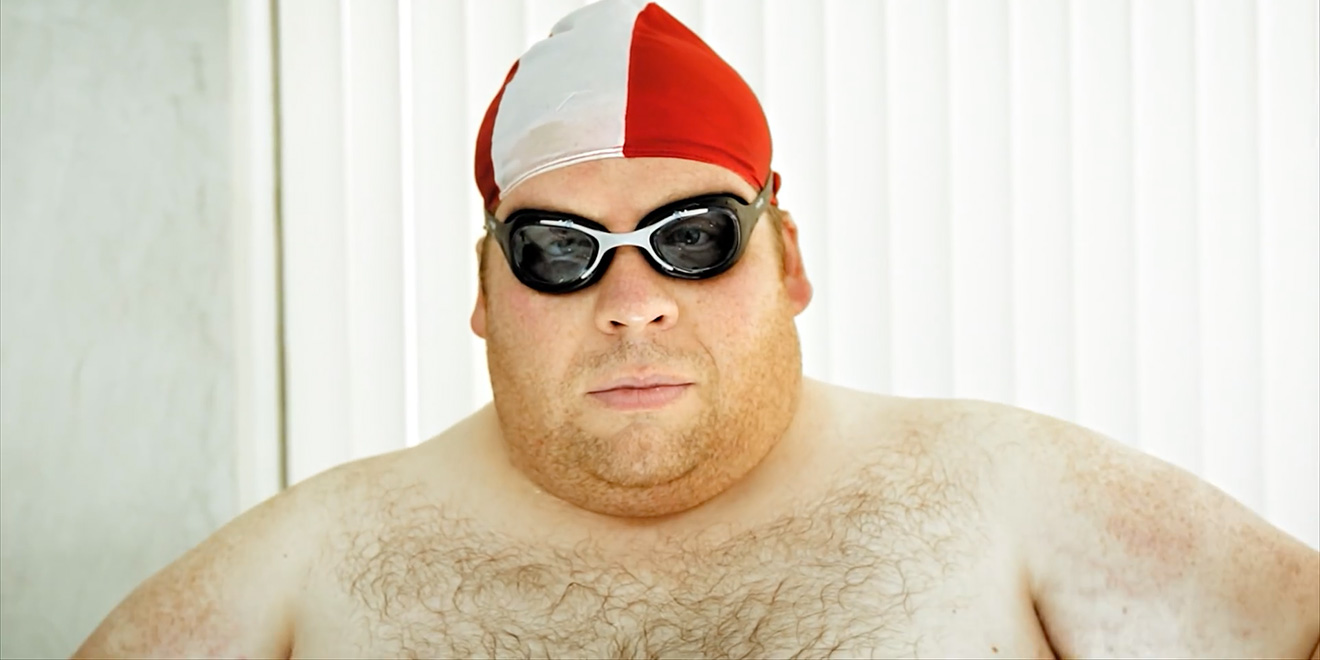 Cristiano Ronaldo may be one of the most famous footballers in the world (the Real Madrid forward is a four-time world player of the year), but he’s apparently not immune to an off-season slump that involves lying on the couch and eating junk food.

What will become of his internationally famous six-pack?

An ad for headphone maker ROC, Ronaldo’s consumer electronics company, whips him back into fighting shape via “The World’s Biggest Trainer,” which is both the name of the parody video and its rotund eponymous star. This fitness professional is unconventional, to say the least, and what he lacks in hard-core know-how, he makes up for in sheer poundage (and a heaping helping of overconfidence).

The “trainer,” played by YouTube actor-comedian Christian Busath of “Fruit Ninja” fame, can’t touch his toes or do a crunch, but he’s referred to as “a golden god” charged with bringing Ronaldo back from the slothful brink. He does it while wearing a tiny Speedo and attempting moves like windmills and lunges. (He’s unsuccessful at the latter because “my scrunchels are showing,” he says.)

ROC, which kicked off in 2015 with a Shareability spot that became one of the year’s most shared videos, has refined its positioning to be a sports-and-training brand (within the crowded, celeb-heavy lifestyle and fashion headphones and fitness gadget category).

Consumer research showed many people think working out is boring, but music can be a solid motivator, said Shareability’s CEO Tim Staples, which could’ve led to a long-form ad of Ronaldo pumping iron and “looking like a Greek adonis” while showcasing the audio products.

“We decided to do the exact opposite,” Staples said. “The storyline is Ronaldo’s gotten lazy, so we called in the big guns.”

And they put him in the smallest clothing possible.

“We wanted it to be a little ridiculous,” Staples said. “It’s real product with real credibility, but we don’t take ourselves too seriously.”

Ronaldo, for his part, doesn’t do comedy as a general rule, but he made an exception here. The video, shot at the star’s home in Madrid, shows him and his new fitness guru side by side for some warmups before hitting the pool. (There’s mostly dog paddling and something called “the washing machine,” which may or may not have any health benefits.)

Ronaldo, who has some 250 million social media followers, wanted to give his fans “something they hadn’t seen from him before,” Staples said.

The goal is to hook people with the piece of satire and later give them a series of actually helpful training tips and information, further pushing the brand’s distinction as a sports and performance booster.

The fourth quarter is a pivotal time for many brands, especially potential gifts, and ROC’s line has bolstered its distribution deals with Amazon and Alibaba ahead of the holidays. There’s a major push for Asia, though Europe and the U.S. are in the campaign’s sights as well.

In addition to the ad, there are some “Biggest Trainer” clips of “the perfect karate kick” and other highly suspect moves. Watch them on ROC’s LiveLifeLoud site.