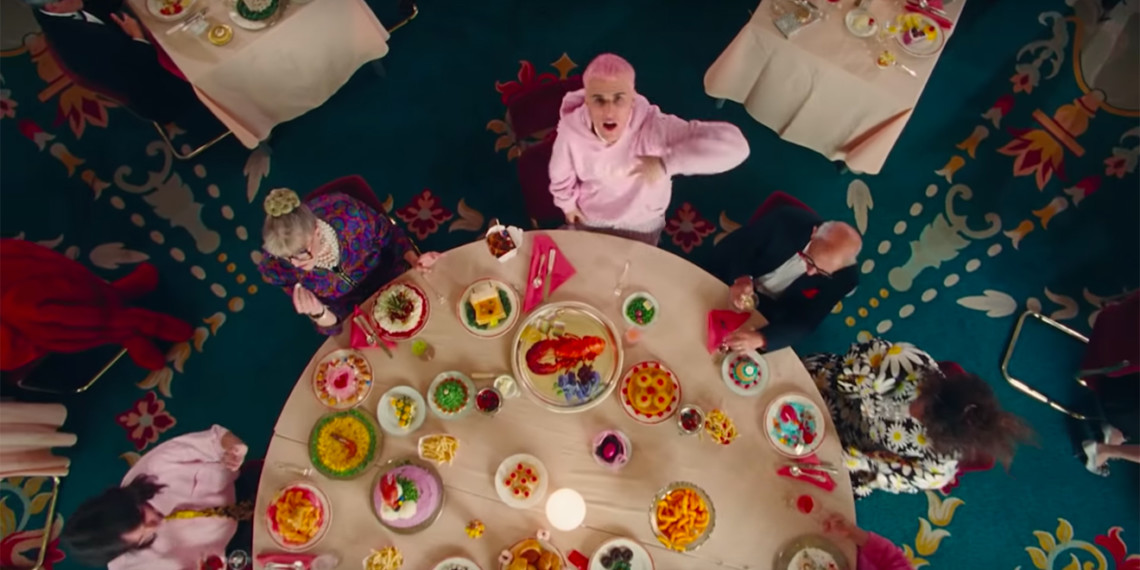 The pop star's visually lush array of foods was created on a surprisingly small budget of about $1,000. - Credit by Justin Bieber via YouTube

Justin Bieber is going to a dinner party in a swanky ballroom, but this is no ordinary meal for the 25-year-old global pop star. It’s a gustatory extravaganza, complete with fantastical Jell-O molds, candy-colored cakes and seafood towers that could’ve been plucked straight from a 1950s buffet.

And, oh yeah, one very expressive cheese sandwich to keep him company.

The singer’s latest music video, “Yummy,” has been viewed more than 230 million times on YouTube and marked one of his most ambitiously visual projects to date. To pull off the detailed concept—Bieber at the center of an over-the-top and evolving feast—director Bardia Zeinali entrusted two veteran food stylists with turning his ideas about a culinary fantasy world into reality.

Emily Marshall-Garrett and Maya Bookbinder spent four days creating “an enormous quantity of food” for the video. It was one of the most large-scale projects either food pro had ever tackled, said Marshall-Garrett, though the marching orders were clear.

“The director wanted whimsical, over-the-top, colorful, throwback, vintage food,” she said. “He does really visually arresting work with a high-low aesthetic, so it would be almost like Edwardian fare mixed with fast food. It needed to look very opulent and signal high living and excess. And absolutely no meat. So I said, ‘What about seafood?’”

The women, plus an assistant, spent four days creating the playful, almost Dr. Seussian-looking feast that serves as the video’s focal point and only backdrop. (The shoot took place at the historic Biltmore Hotel in downtown Los Angeles, with food covering nearly every surface of the 6,000-square-foot ballroom).

“The food is beautifully, lovingly featured. And the whole thing is shot on film, which is unusual for a music video,” Marshall-Garrett said. “Food is the main visual tool—there’s not a single other featured prop.”

Bieber is using the 4-minute “Yummy” video to shill for a slew of upcoming work, including a just-dropped new album (his first solo effort in five years), a 10-part docuseries on YouTube (Justin Bieber: Seasons), and a 45-stop North American tour that starts in May.

Marshall-Garrett spoke to Adweek about the many flourishes of the “Yummy” video, from its “insane, surreal mashups” like lobster claw and green pea garnishes on glittered cakes, to the often unsung role of the modern food stylist (makeup and hair pros are listed on the official credits for “Yummy,” while she and Bookbinder are not).

She shared her insight on how to tell a story with mashed potatoes and Circus Peanuts and whether anyone should eat those wiggly, jiggly rainbow-hued gelatin dishes. (“No. Just no.”)

Adweek: How challenging was this project?
Emily Marshall-Garrett, food stylist: It nearly killed us, which is kind of typical for a video. We were murdered by the hours. If it were up to me, we’d have had at least one more full day, and two would have been better. To give you an idea, we used almost half of our prep just shopping. No one can ever imagine how much time that takes. It was an extreme scope of work in a short period of time.

What drew you to this video?
I love the process of using food as a narrative device, and the treatment was fabulous, just incredible. It really described the environment through food. It was a lot like a pitch deck in advertising. And it was very magical to be able to flex so many creative muscles with another person (Bookbinder) who has the same visual aesthetic. There are so few jobs like this.

"The shocking fact is that food is really cheap when you don’t plan on eating it. I was making purely visual choices."
—Emily Marshall-Garrett, food stylist
Talk about your food styling background, and why you think food stylists don’t get much recognition.
I’ve done commercials, like Jack in the Box, and music videos (for Pink, Snoop Dogg) but mostly I do scripted TV and film. The vintage food lens is where I fire on all cylinders. I worked on The Astronaut Wives Club (an ABC drama) with these massive spreads of cakes and casseroles. The PR team and show runners knew the food would get some attention, so I had a lot of press for that. But generally, the food stylist is invisible. It’s so common for us to be overlooked. It could just be an oversight, but I think it’s a missed opportunity if nobody’s name is associated with the food.

Did you have a huge budget for the “Yummy” video?
The shocking fact is that food is really cheap when you don’t plan on eating it. I was making purely visual choices. The only expensive thing I bought was the seafood. I got beautiful, high quality shrimp and lobster because you can’t fake that. But otherwise, it was cans and powdered and processed, factory-made stuff. We spent less than $1,000 for all the food, including silk orchids and decorations.

How do these dishes taste?
That industrial-grade gelatin is like chewing rubber. There’s no sugar, no flavoring. You’d never want to eat it, no matter how good it looks. And when you have this much food, it can’t all stay fresh and that’s not the issue. You just want it to hold together and look good even if it sits there for hours.

Why are there so many odd pairings and weird juxtapositions of food in “Yummy?”
There was a definite color palette (even extending to Bieber’s pink hair and clothes) but we didn’t want everything to look sweet. It’s not fairy candy land. But whimsical was very important. We wanted the food to look savory. So we garnished desserts with vegetables, mushrooms, peas. So many of the strangest mashups happened on the day of the shoot.

Talk about that funny cheese sandwich, which has gotten a lot of fan love.
Maya made that in about 90 seconds, and she had to do it without bologna because we weren’t using any meat. She used a pickle for the tongue and olives for the eyes. We had no idea where it would end up. It wasn’t meant to be a hero item, but it sat on the table right next to Justin the whole time. At some point, it started to look drunk. It was funny because it seemed like that star that got picked from the chorus line.