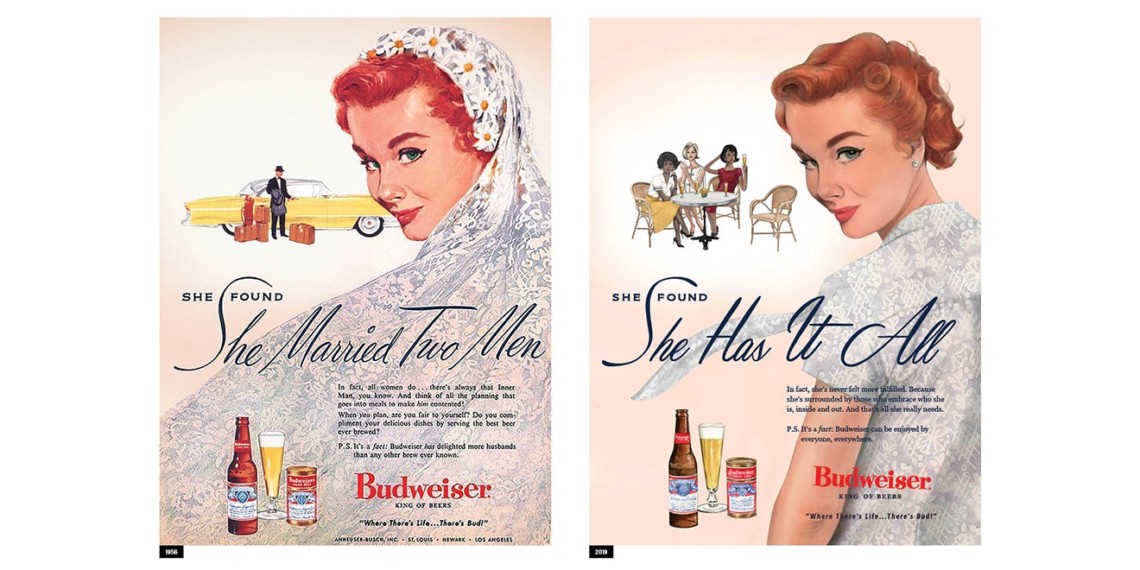 A 1956 print ad for Budweiser ran side-by-side in The New York Times today with a modernized version for International Women's Day. Budweiser

If you open up The New York Times, Chicago Tribune or L.A. Times today, you’re in for an unexpected trip back to the Mad Men era.

Budweiser is reprinting three of its 1950s ads today that portrayed women as little more than dutiful housewives. But alongside the originals, the brand is running reimagined versions of the same ads featuring a more enlightened message.

For example, in the ad above, a 1956 message playing on women’s insecurities in fulfilling their husbands’ needs becomes an empowering statement about living your best life and surrounding yourself with people who appreciate you. The role of the beer itself changes notably here, of course, shifting from a tool of appeasement for men to an icon of enjoyment for women.

The point of today’s print campaign from Budweiser is multifold: The brand is, of course, recognizing International Women’s Day, which has become an increasingly important moment for marketers in recent years. Budweiser is also promoting its partnership with #SeeHer, an industry effort to improve how women are portrayed across all advertising.

But the brand also isn’t looking to shred its own past or shift the message to the point where it’s making men a punchline. Monica Rustgi, Budweiser’s vp of marketing, says the project is instead about highlighting how times have changed and how the message behind the beer (whose marketing and agency teams, she says, are predominantly women) has evolved as well.

“One of the things Budweiser does best is take things that are iconic from the past and bring relevance to them for the future,” Rustgi tells Adweek. “As we look at what we’ve done here, we have a lot of pride in where we’ve been, and we’re super excited about our role in helping lift the advertising industry.”

One of today’s International Women’s Day ads that Rustgi is particularly proud of is the reboot of a 1958 ad that showed a wife refilling her husband’s beer while he repairs a telephone. In the new version, the couple is shown taking a break from working side-by-side as they unpack in a new home. The hammer from the original ad is still there, but in a new context, as seen below. 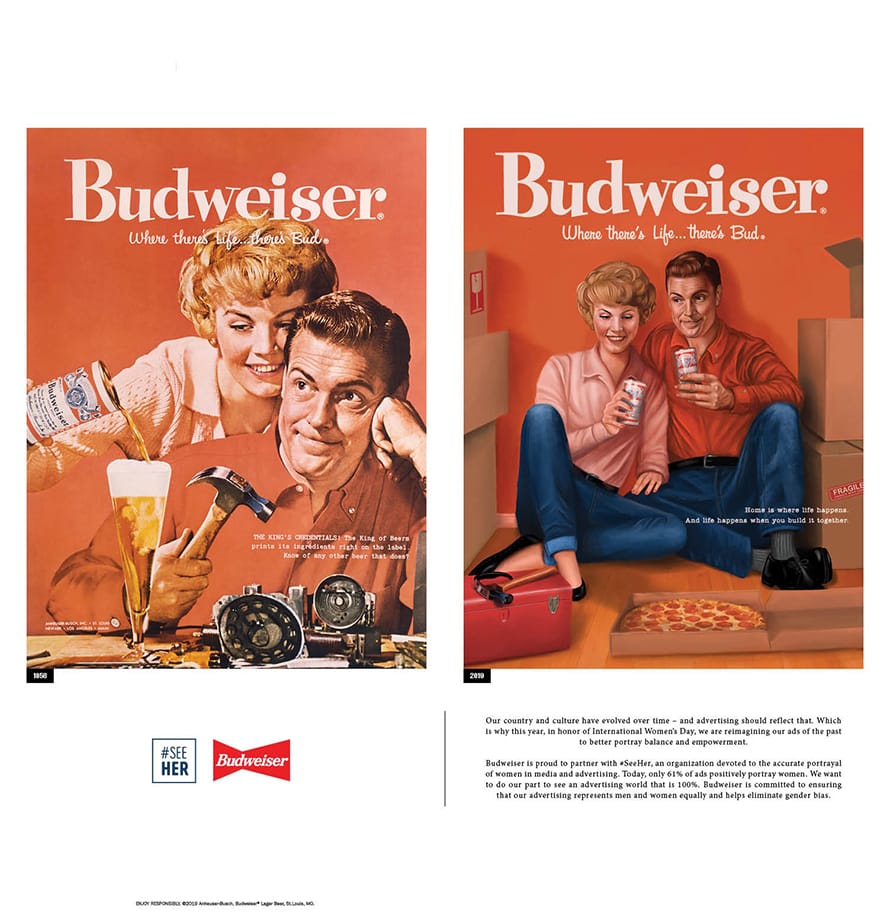 “We had a lot of fun with this one,” Rustgi says. “The original ad was very stereotypical. Part of our initiative is to ensure we’re portraying men in a positive fashion too.”

The ads were developed by Budweiser agency VaynerMedia, and three female illustrators around the world were tapped for the recreations.

“Both professionally and personally, I’m thrilled for this campaign to go live,” Rustgi says.

The #SeeHer partnership will be an ongoing effort through which Budweiser’s ads are consistently evaluated to determine whether they are portraying both genders positively. According to #SeeHer organizers, only 61 percent of today’s ads show women in a positive light, and Rustgi says Budweiser is committed to being part of a larger industry effort to change that number dramatically.

Here’s a look at the third print ad from today’s campaign, followed by zoomed-in versions of the ads for comparison: 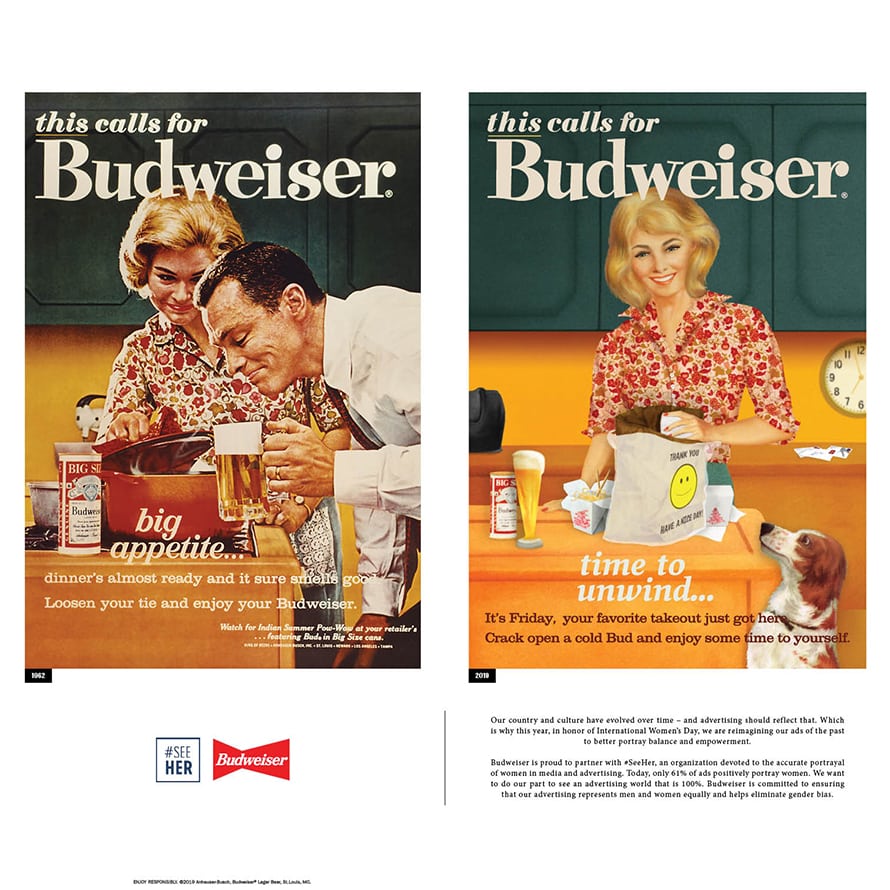 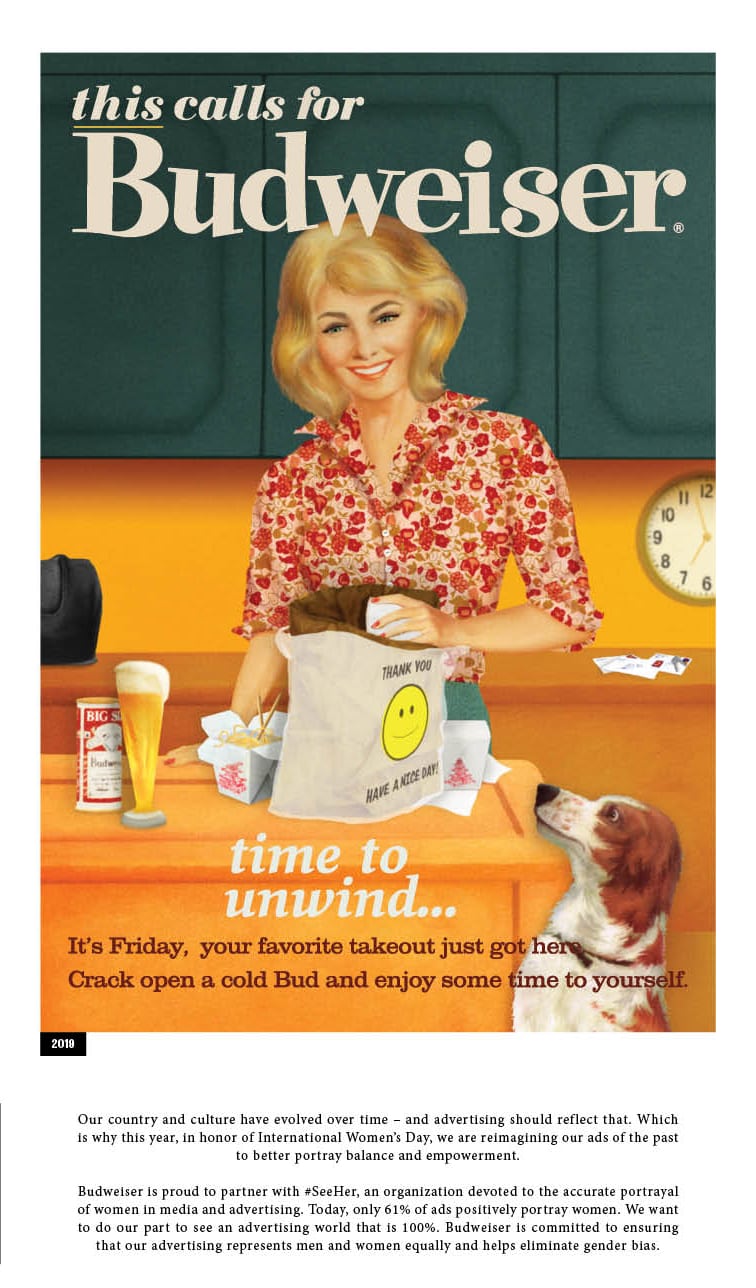 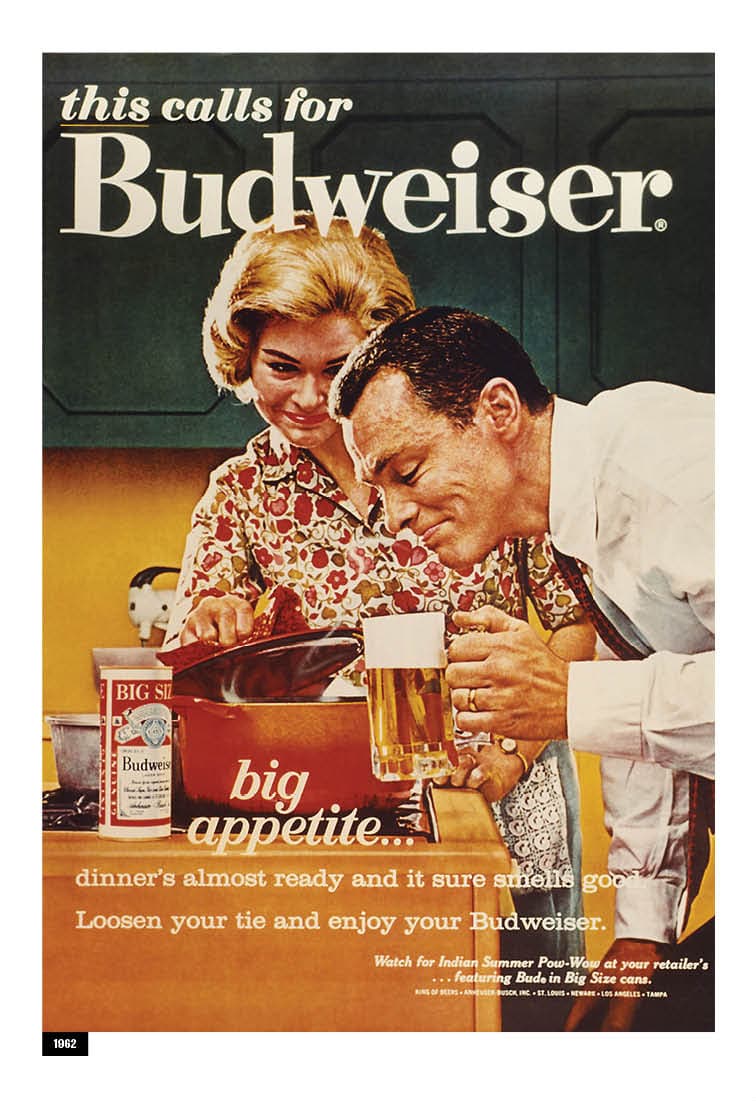 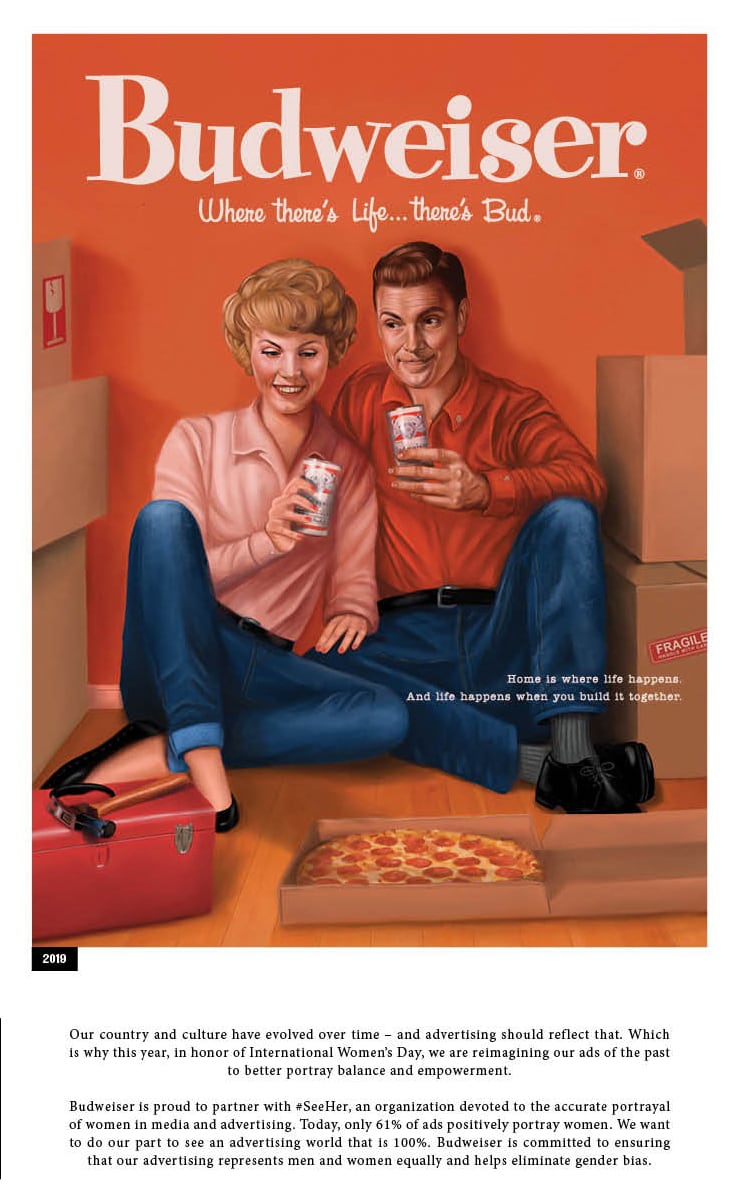 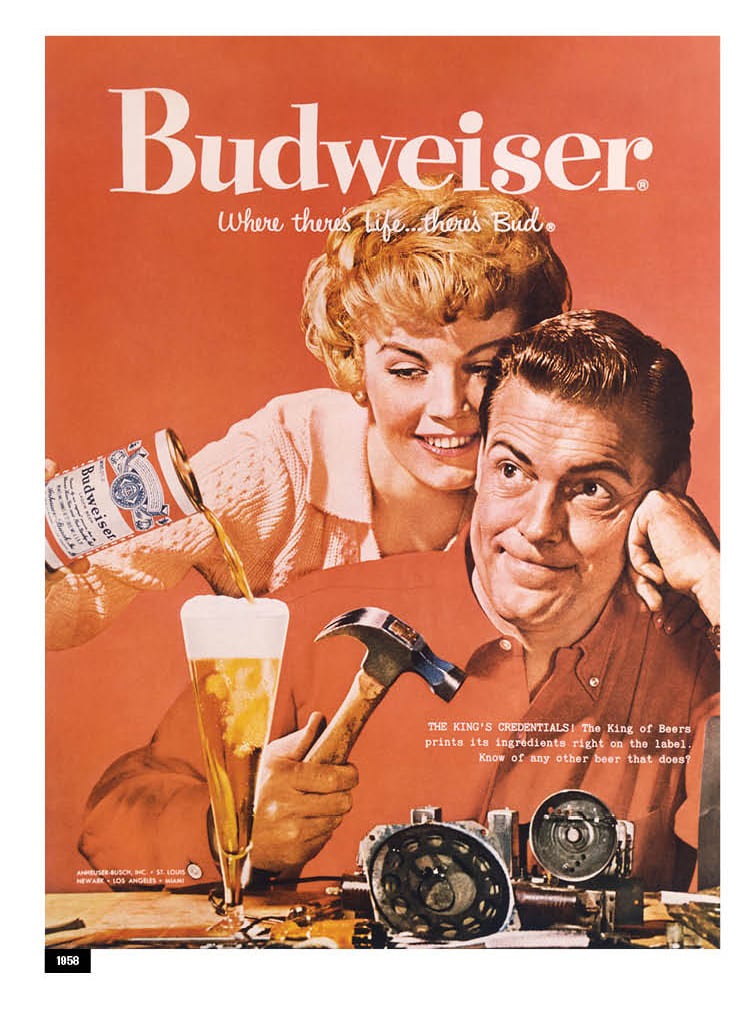 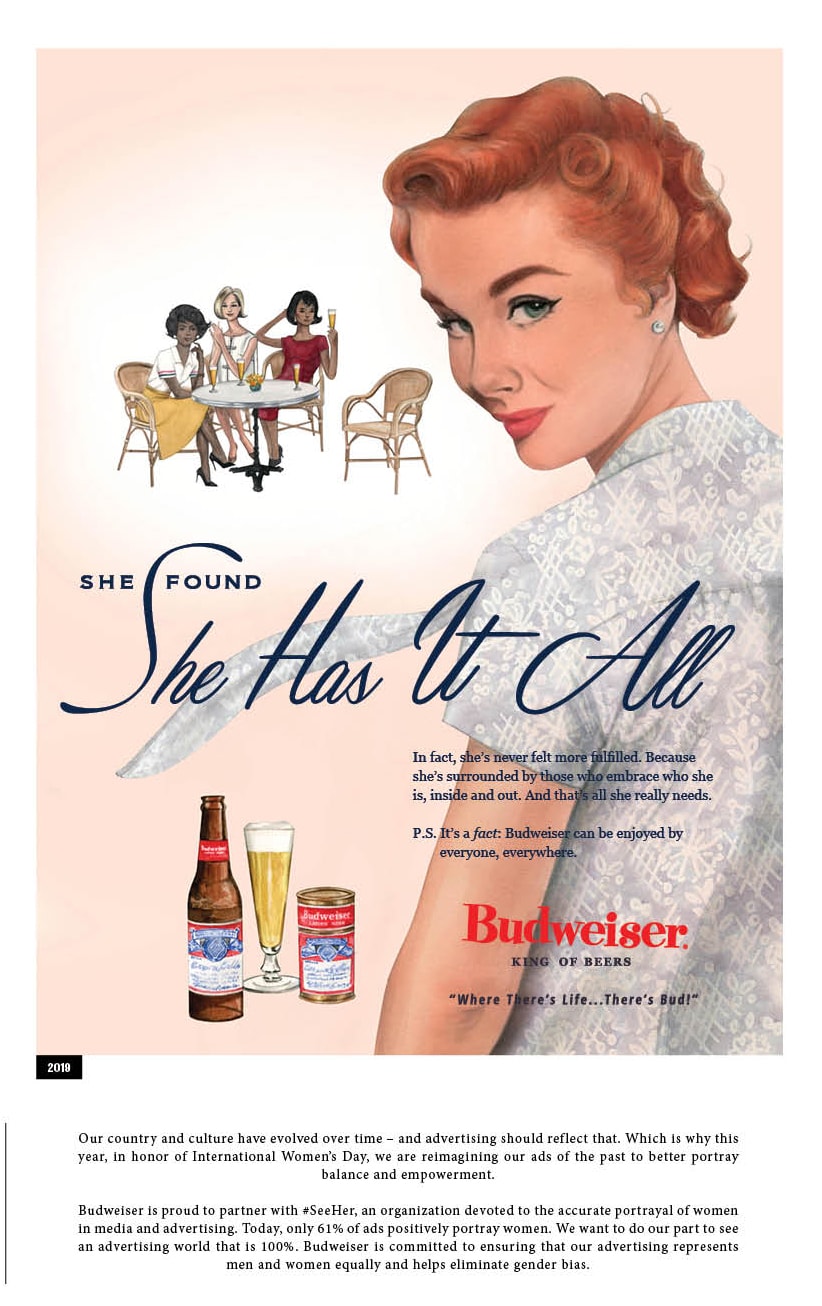 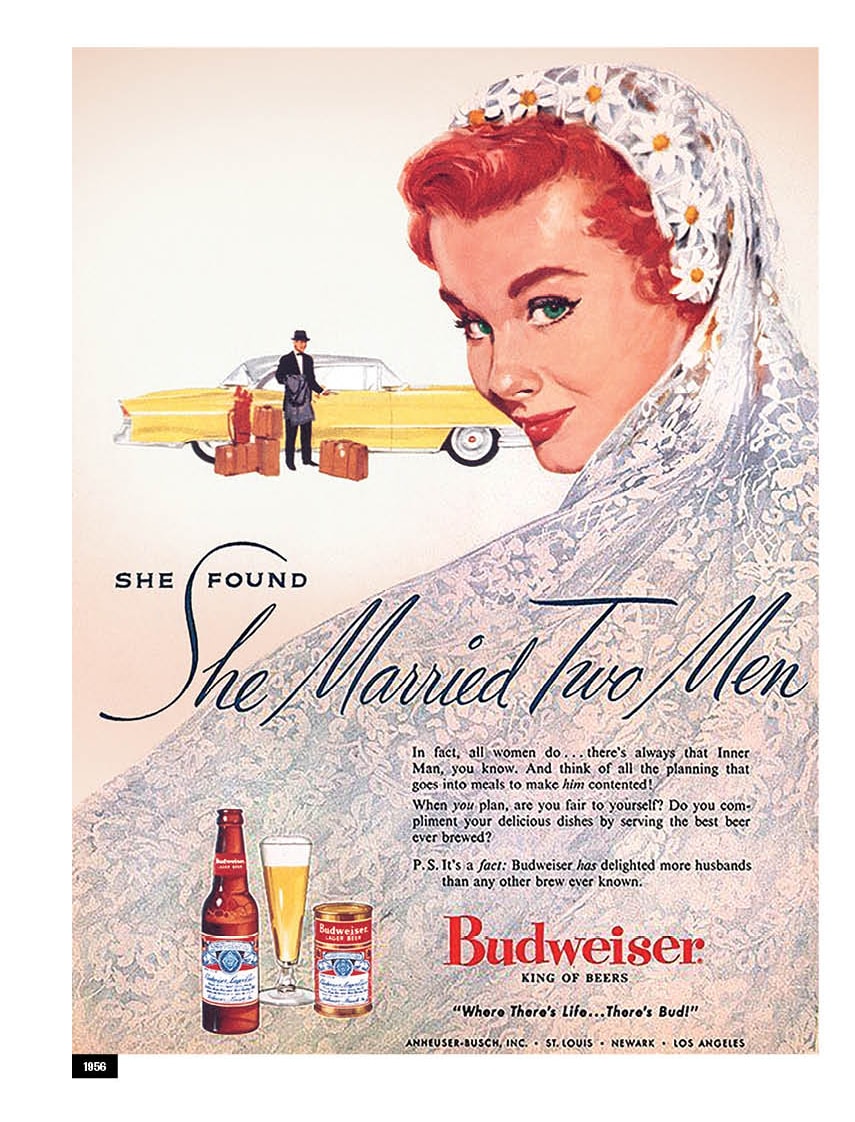