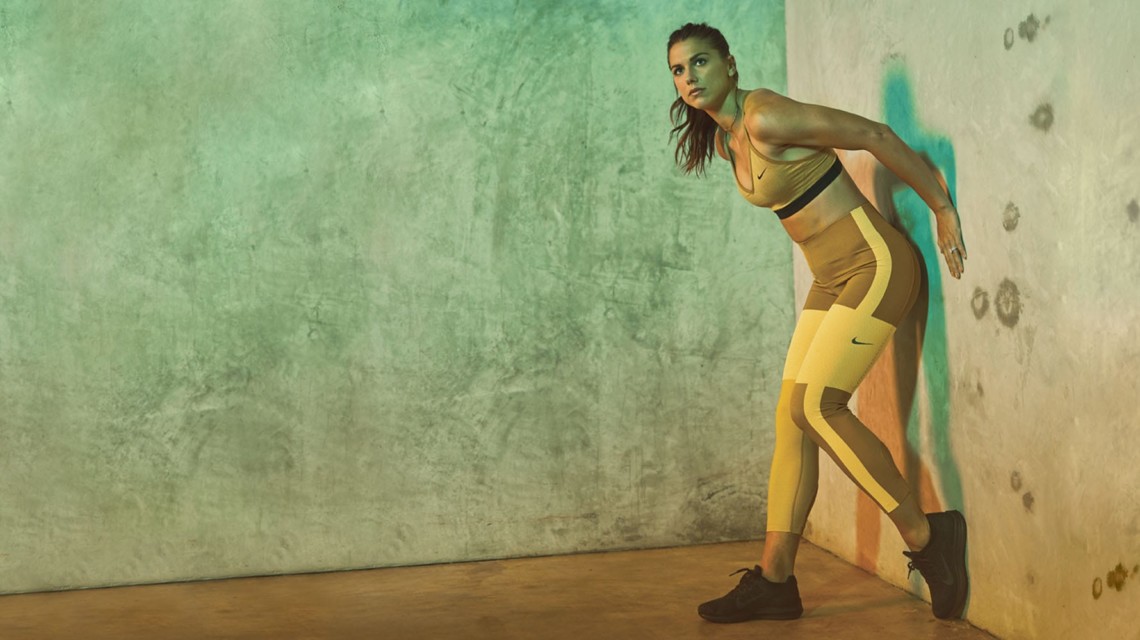 I came to Adweek at the beginning of March, and three days into my new position as photo editor, I worked on my first cover shoot: Alex Morgan, co-captain of the U.S. soccer team, which, a day before publication, brought home the World Cup. To prepare, I scoured endless Google Images searches of her to see where she had been photographed, how and by whom. There was a common theme: soccer uniform, smiling, swimsuit, approachable, sexy, etc.

But for Adweek’s fourth annual Most Powerful Women in Sports issue we wanted to really emphasize Alex as a force, both on the field and as an advocate for equal pay. I was drawn to this quote from Karrin Anderson’s review of Time’s 2012 split covers of its summer Olympic preview: “They draw the reader’s gaze to the female body without sexualizing it.” This became my mantra for this shoot.

In my research, I also noticed there aren’t many women photographing sports figures. But then I came across the work of Miami-based photographer Mary Beth Koeth. I loved the strength and determination in her portraits of Venus Williams, her use of color and that her style is different from what you would normally see in Adweek. She was what I was looking for. I contacted her and stylist Mila Gonzalez Kastari back in April to hash out a plan for our shoot.

We really wanted to avoid the classic “soccer player holding a ball” pose but still wanted her to show Alex as the powerful athlete she is. So I looked back at images from various editions of ESPN’s Body Issue and at the work of photographers Eadweard Muybridge, Dana Scruggs and Dylan Coulter and Entertainment Weekly’s Walking Dead split covers—because Each of these photographers dealt with the body and movement in interesting ways either in-camera, via multiple exposure, or beyond the camera via energy, style and power. We decided that we wanted the portrait to be gritty and show movement yet to look elevated and stylized.

Now that I had the photographer, stylist and concept, we needed to find the right location, and it needed to be in Orlando, where Alex would be training. It was important that Mary Beth could play with light and color in a dynamic way while keeping Alex as the focus of the image. We also wanted to capture that environmental texture that you just can’t get from a seamless. “I was drawn to the concrete walls at Orange Studio in Orlando,” says Mary Beth. “I was able to light the space with colored gels that would pair nicely with Mila’s styling.” 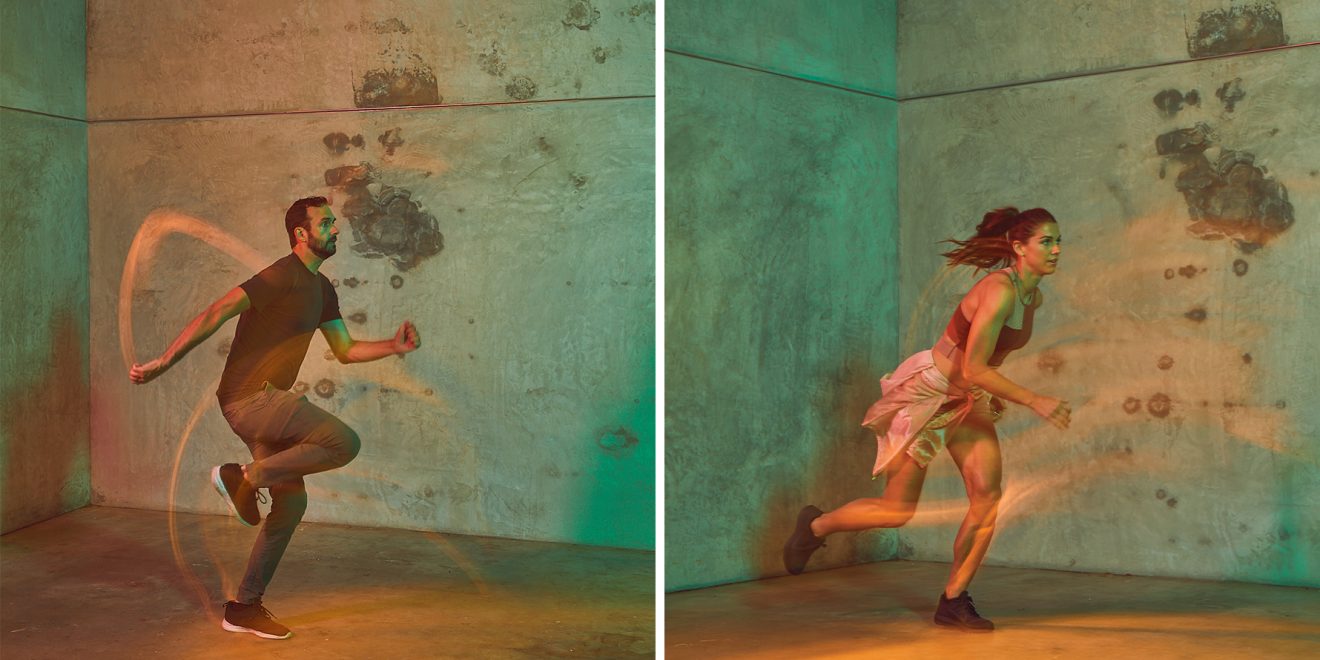 Left: Javier, the photographer's assistant, demonstrating the kind of motion we wanted. Right: Morgan in action.
Photos by Mary Beth Koeth for Adweek.

We found out that we would only be able to get 45 minutes with Alex for the shoot. She had an extremely busy training schedule for the World Cup. Because of the time constraint, we decided on two outfits and three different setups. Mila pulled together items from Nike, including pieces from their new collection—thanks to the brand’s endorsement deal with Alex—that gave her that stylized look we were going for.

And then it was shoot day. Alex walked through the door and went right up to Mary Beth and introduced herself. She smiled and said, “A female photographer! I love that.”

Mila showed her the wardrobe she had pulled, and they collaborated on which outfit would work best. “She was excited to see the pieces from the new collection,” said Mila. “She loved everything, and we ended up using more looks than what was originally discussed.” 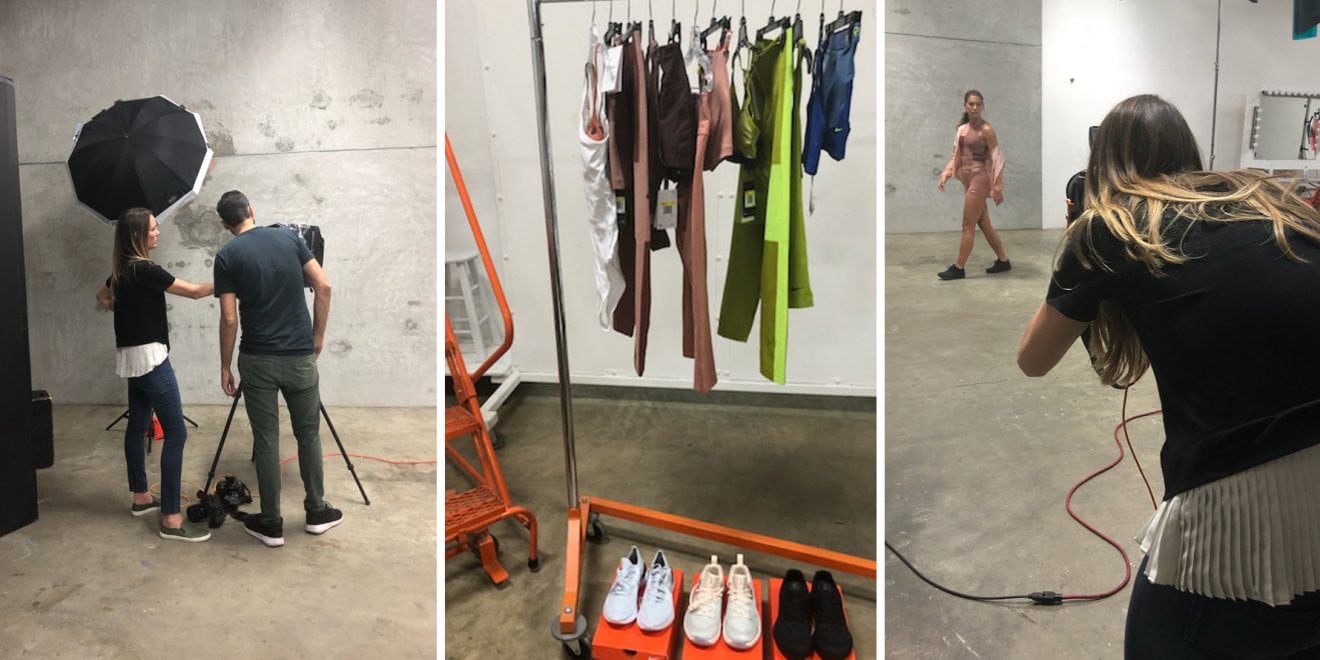 Mary Beth showed Alex the test shots of the three different setups and of the side drills that she and her assistant had worked on. Alex was really open to direction and understood the concept we were going for. “She got on set and nailed it,” said Mary Beth.

“I had this one setup in the corner that we lit in greens, yellows and blues,” she continued. “Mila had an outfit on the rack that was fluorescent yellow. I showed Alex the test shot and said, ‘That outfit over there would look amazing.’ Without hesitation, she said, ‘Let’s do it!’ It made the image that much stronger.”

To get the shot of Alex in motion, Mary Beth had her assistant, Javier, demonstrate what she was looking for. “Like a true nerd,” said Mary Beth, “I Googled ‘athletic drills’ before the shoot.”

“Very quickly you could tell she was extremely down to earth,” said Mila. “She played her own music, including ‘Sunflower’ from the Spider-Man movie, which is my kids’ favorite song. That made me smile as I watched her do some action shots with Mary Beth.”

It really was a giant collaboration between everyone. And the result, as you can see on the cover, says it all: Alex Morgan is an undeniable force. 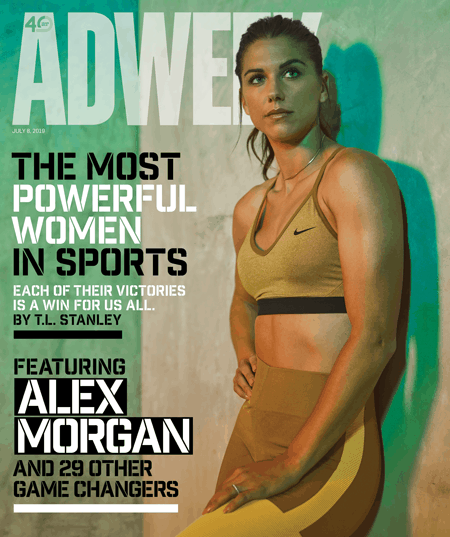 The final cover. Photo by Mary Beth Koeth for Adweek.
@kacyburdette kacy.burdette@adweek.com Kacy Burdette is a photo editor at Adweek.