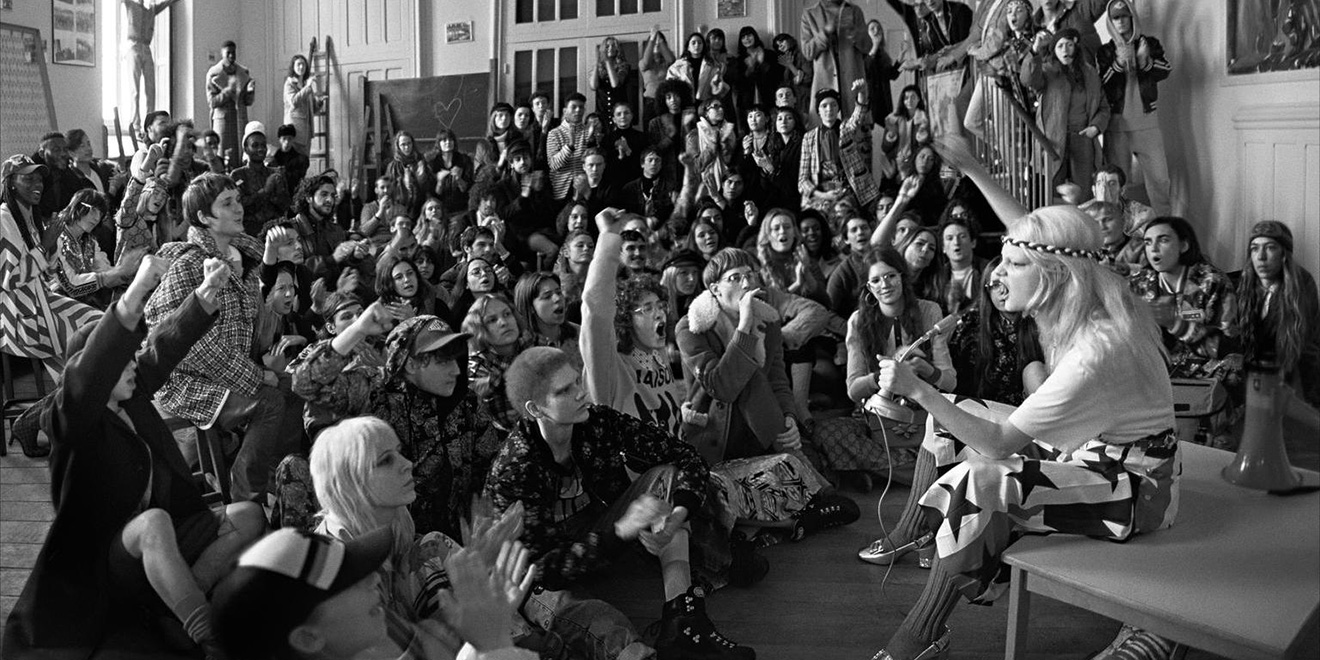 It doesn’t take a lot for people to stop believing in their institutions.

It doesn’t take much to dampen our sense of injustice and the motivation to force change. If too many messages conflict, too many injustices go unpunished and too much infighting is left to fester in our fresh-dug trenches, we can easily become a culture that moves from breathless rage to cool apathy with whiplash-inducing speed.

And yet there are moments, jagged hiccups in the line graph of the human trajectory, when it doesn’t take much at all to stir us up so violently that we demand change almost overnight. It’s happening with #MeToo, and in many ways it happened with #OccupyWallStreet.

But before those movements, there was May ’68, a month when French students flew into total establishment rebellion. Gucci’s 2018 pre-fall collection campaign, #GucciDansLesRues (“Gucci in the Streets”), seizes inspiration from a period so marked by youthful disgust at capitalism, consumerist culture and American imperialism that it actually compelled President De Gaulle to flee and brought the French economy to a grinding halt.

May ’68 was characterized by a bunch of seemingly spontaneous wildcat strikes where students occupied factories and universities, including the Sorbonne in Paris. They often ended in violent clashes between the police and kids on the street. (If you ever watched Bernardo Bertolucci’s The Dreamers, it’s about this moment in time. Roger Ebert reviewed the film and was also in Paris when it occurred. His reflections are as surreal as the film itself.)

The flame was fanned not by news media but by cinema, arguably kicked off when Henri Langlois, founder of the Cinémathèque Française, was ousted. Filmmakers like François Truffaut and Jean-Luc Godard, who’d define the Nouvelle Vague, conceived onscreen stories that take place in the period, refer to it or abstractly encapsulate what people wanted. “Liberty, equality and sexuality” was a common banner.

But that’s enough history. “Gucci in the Streets” is brought to you by Glen Luchford, who gleans from the spirit that drove May ’68. It’s packed with glamorous, anarchic rage, fist-shaking speeches laced with the free-wheeling sexuality that so often colors our imagination about the ’60s and ’70s. Some shots feel old, others modern, and its fashion sensibility feels both chaotic and chic.

What you get is an energetic reimagining of student protest, driven by imagery that, whether political or abstract, is united by Davids versus Goliath. To wit:

There’s a lot of this in advertising lately. It varies in sincerity, but draws from the same rapidly boiling pot.

Last year, Portugal. The Man worked with Wieden + Kennedy to produce a revolution-driven music video, packed with easter eggs that enable you to take action against the current American administration. Diesel’s current campaign, inspired by flaws, has a distinct anti-establishment resonance. Even Pepsi’s awkward Kendall Jenner ad, in which the young model joined a protest and diffused tensions by offering militant cops a cool bevvy, sought to tap a vein we can all recognize, even if we hated the way they did it.

Most notably in fashion, there’s Oliviero Toscani who, despite his age, returned to Benetton to remind us change is not about fashion at all; it’s about fighting the institutions that are constantly asking us to approach others from a zero-sum perspective.

Toscani doesn’t care about making subversiveness beautiful. He cares about bringing cultural realities front and center, where we can no longer hide from them. If consumerism’s been weaponized for identity politics, he’s disarming the bombs—and his efforts actually look more violent than the work we’re used to seeing.

That’s why the choices we make in advertising are so meaningful.

It’s also for this reason that Toscani is so often the mental yardstick by which we measure the value of a revolution-driven campaign, especially one from the fashion industry.

While “Gucci in the Streets” is energetic and beautiful, its romantic view of the indignance that fueled May ’68 is as dangerous as the way modern conservatives romanticize the ’50s, when the nuclear family was all powerful and white. That mostly white strain can be felt here, too—ethnic minorities are conspicuously relegated to the edges of the frame. In one shot, a single black hand rises among dozens of white ones.

Compare this to Benetton’s most recent work. Instead of models, it featured 28 typical Italian schoolchildren. They hail from 13 different countries.

Building on those misfires, “Gucci in the Streets” gloms onto rebellion by using white faces to glamorize it. In this regard, it’s faithful to the aesthetics of the New Wave, but the latter was itself a glamorized rendition of a fraught time. Thus, Gucci misses the entire point of what fuels our anger now—the fact that so many of us are simply not valuable enough to appear front and center of this violent jag in the human histogram … so much of which is about us in the first place.

Gucci in the streets? What streets have you walked lately? As the French say, this is little more than bon pour la poubelle.