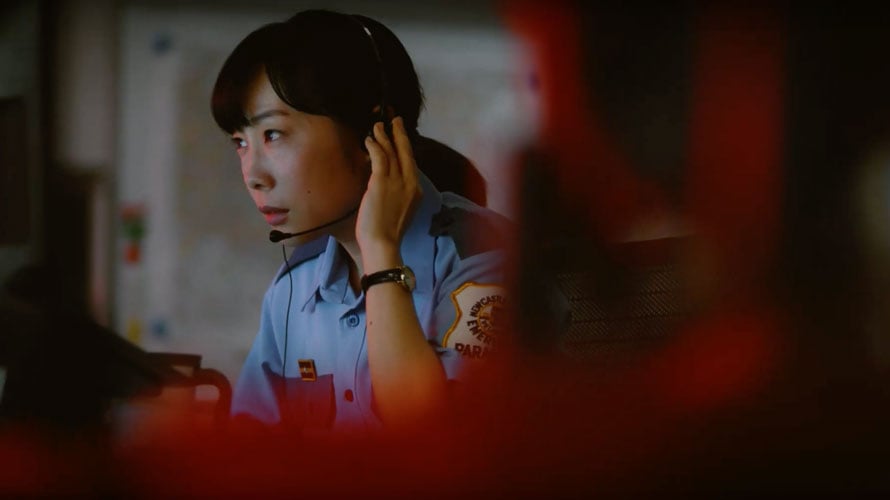 An all-too-brief young life flashes before a young woman’s eyes as she swallows pill after pill, waiting for the darkness to overtake her.

On the other side of the line, a 911 operator relates, in an unusually personal way, to this woman’s tale of bullying and the fruitless search for meaning in her own life.

“You don’t need to come,” the young woman says as the operator zeroes in on her location. “I just wanted someone to talk to one last time.”

Perhaps ironically, her pained cry comes from the middle of a packed Tokyo karaoke bar. As she asks the operator to apologize to her mother, her peers sing, dance and share intimate moments in close proximity, oblivious to the fact that a young life is about to end.

The nameless operator views her own day-to-day existence in parallel to that of the girl whose life she ultimately saves.

Emergency technicians arrive on the scene, she sheds a single tear as the clock strikes midnight and her workday ends. The next morning this vicious cycle will begin again.

Branded content offerings often call themselves “short films,” but this work from Japanese production company Tokyo earns that title in that it does not advertise any specific product. It was the “Popular Vote” winner at this year’s Adfest event in Pattaya, Thailand, where director Jo Motoyo served on the jury, and the company has begun pitching it again ahead of next week’s Cannes Lions festival.

“People always pretend to be happy. But I don’t think that’s always necessary,” Motoyo said of the work. “Everyone has a dark side, but they keep it to themselves. I really wanted to highlight that with this film.”

She also made a point of focusing on bullying and suicide among young people in Japan, which have earned increased media attention in recent years.

“The setting was unique because I put a blind in between myself and all the actors so I couldn’t see them,” added Motoyo, who interviewed 80 young women during the audition. “I asked them what their toughest experiences were, and 80% of them answered [that] they were bullied.”

Regarding her goals with the project, she said, “I wanted the audience to interpret the film in their own way, which is why the ending is a bit open. The last scene, where the main character is staring at the PC, there’s so much emotion in her eyes and you can really feel it. That’s what I hoped to accomplish.”