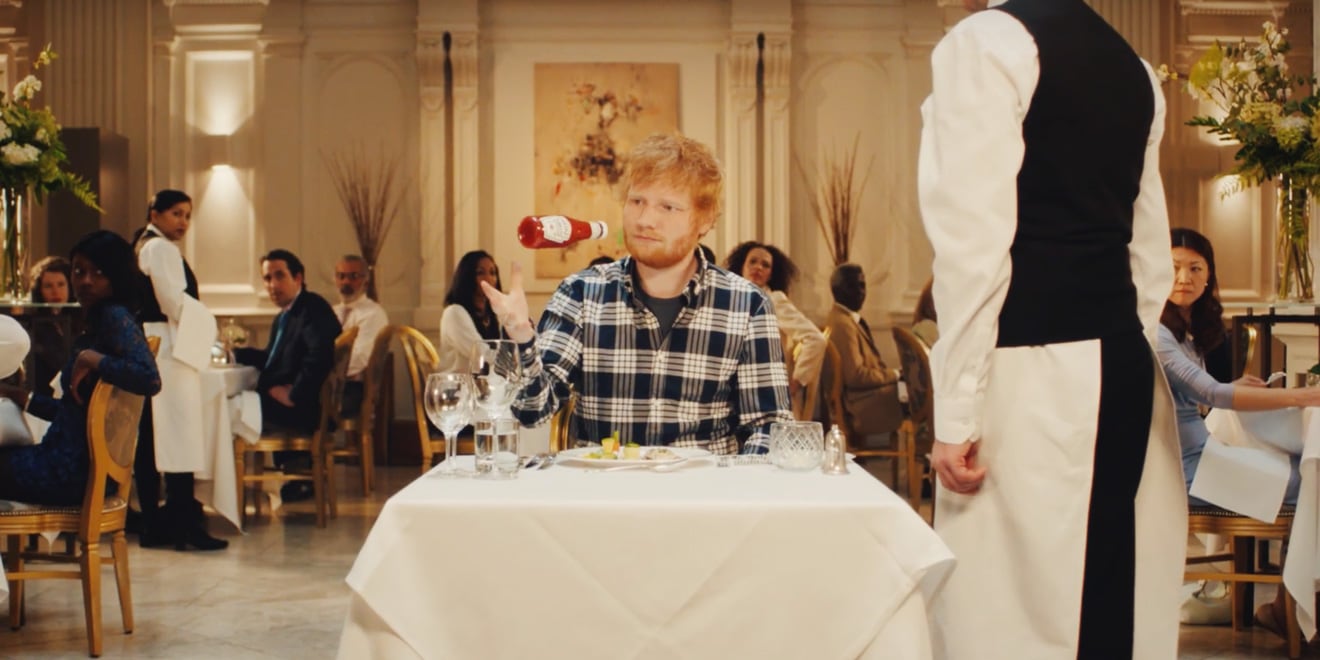 Ed Sheeran says Heinz ketchup is the "only thing that can complete" him. - Credit by Heinz Ketchup

The ubiquitous pop singer and songwriter has been teasing his work with the condiment brand since early May, and the ad itself, which launched today, channels his “aww shucks” persona and genuine love for the brand into a slightly sweet, slightly tangy glop of an everyman sales pitch.

The story starts with Sheeran walking into a “super posh” restaurant complete with fancy silverware, fancy music and fancy food. Cue the bottle of Heinz—pulled casually from the unassuming backpack he presumably totes everywhere—and in turn, the abject horror of the waiter.

Heinz is, says Sheeran in the ad, “the only thing that can complete me.” As he piled some onto his meticulously prepared, delicately plated farm-to-table cuisine, the waiter “was screaming—with his eyes.”

All in all, it’s a predictable but fitting approach: conversational and broad, in keeping with Sheeran’s own brand of being famously accessible, friendly and humble (to the point where some people find it completely intolerable but also painfully charming).

The campaign could come across as a try-hard, willfully unpretentious and mildly funny partnership between a huge celebrity and a relatively mundane brand, framed as born of a casual “Hey bro” direct message the singer sent the brand. It also includes a limited edition “Edchup”—as if Sheeran weren’t already widely known to worship the stuff (the company’s logo is tattooed on his arm after all).

And it’s cleverly written. Notice all the little repetitions (“super posh”) and tangents (“Was it jazz?”) in the voiceover, all to make it that much more relatable. Not to mention the precise form with which Sheeran karate chops the side of the ketchup bottle to extract it (plus it’s accurate: hit the “57,” not the bottom, people).

So in a perhaps slightly congealed stroke of luck for Heinz, maybe Ed Sheeran and ketchup really just were meant to be together—even if it’s just because they’re both very hard to hate.