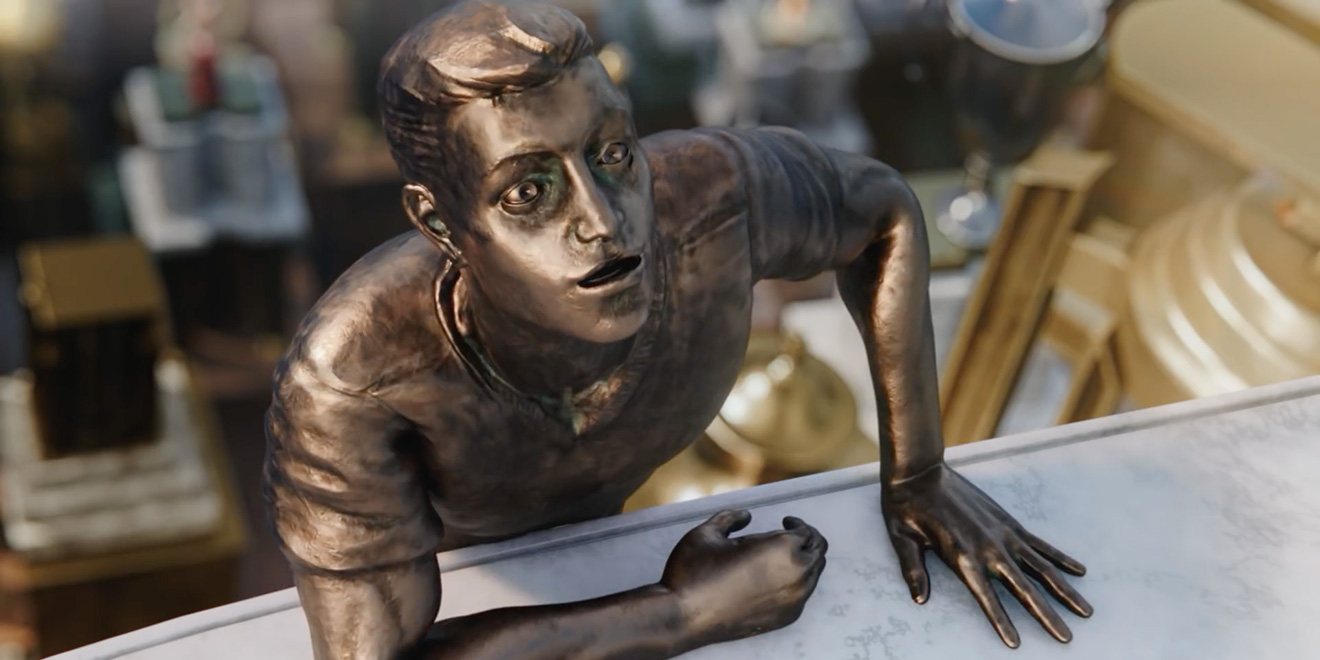 Imagine if all the trophies in a glass display case—the kind you might see in the hallway of a high school or college gym—suddenly came to life and started giving you a pep talk. You’d have Honda’s new ad for the Accord, from RPA.

“Better is a never-ending quest,” reads the plaque in the opening shot, before the camera pans upward to a first-prize statue of a man bowling, which suddenly animates and begins speaking. “There’s a danger to success,” he says, as he throws the ball. “It can bring out your best,” continues a similarly metallic girl, as she juggles the ball into a rainbow kick.

Once you’ve convinced yourself that yes, this is really happening, and no, you’re not having an acid flashback, you might proceed to be thankful that the initial couplet doesn’t turn on into a full-blown sing-song nursery rhyme.

Instead, the next line belongs to a prize fish whose attitude is all Eeyore from Winnie the Pooh. “Or lull you into complacency,” it drones, as if no, it’s not a very good day at all (and, to be fair, it probably it isn’t, for any fish on a line—let alone one that quickly gets scooped up by an eagle).

The camera ascends in a spiral. “If you think you’ve done your best,” says a winged statue, “then aim higher,” replies a chorus of archers. And so on, and so forth.

There are trophies for basketball, the performing arts, bodybuilding, motocross, academics, weight lifting, a spelling bee, a science fair, ballet and boxing, among others. “Keep on reaching for your best,” says a rock climber, as he summits another trophy to find a shiny black Honda perched on top “because better is a never-ending quest.”

It’s visually pleasant, and well written enough to hold attention, even if the sort of upbeat pop philosophy that finds its way into mass market ads can feel tediously pandering—like bad motivational quotes. The message is also clear enough. Honda is at the top of the metaphorical heap of achievement, even if its presence feels a little shoehorned in, or tacked on.

“Introducing the all new Accord, the most impressive Honda ever,” coos the closing voiceover. “Our quest for better never ends.”

In other words, the company is committed to quality—an argument that makes sense, given the automaker’s efforts to restore its reputation after production issues and a leadership shakeup in recent years.

Then again, there are apparently no trophies for accounting, or finance, or other business-oriented pursuits—the generally boring things that might help one earn enough money to buy a new car. In other words, all the fun stuff is metaphorical for slogging through your day job more efficiently so you can replace your vehicle when a hurricane blows through town and sweeps it away.