How 8 Brands Assembled Their Marketing Tie-Ins With Avengers: Infinity War

From Geico to Infiniti and beyond 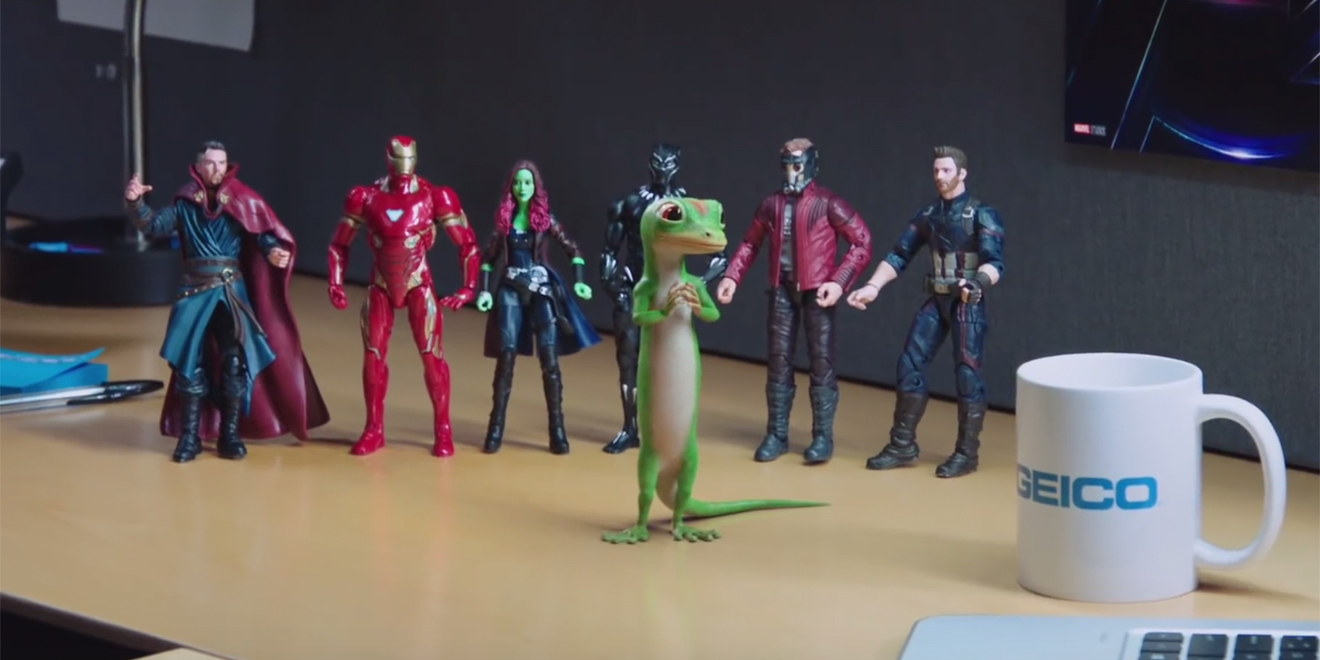 Geico's gecko got close to the action...or at least the action figures.
Geico
Share
By Chris Thilk
|
April 25, 2018
Share

There are a ton of questions surrounding this week’s Avengers: Infinity War premiere. Touted as the final installment in a decade-long run of movies that started with 2008’s Iron Man, there’s been rampant speculation among fans for months on a number of fronts. Which characters might die? Will this open the door for the X-Men to join the Marvel Cinematic Universe if the Disney/Fox merger receives approval? Is someone we know and love actually a shape-shifting Skrull invader?

(Let’s just breeze past the fact that the “this is the end, my only friend” theme of the campaign is a bit disingenuous, given there are three more MCU movies scheduled in the next year alone, including the second installment of the two-part Infinity War story. Moving on…)

The hype has led to record-breaking Fandango advance ticket sales, as well as tons of buzz and anticipation. It’s also led to a number of consumer products brands looking to hitch their wagon to this particular Quinjet. To capitalize on the momentum afforded by such a huge movie, these companies have rolled out substantial campaigns of their own in a united push reported to add approximately $150 million in promotional support. Let’s take a look at some of those efforts.

The insurance provider created a co-branded commercial that had their spokesgecko reciting the “There was an idea…” line from the first Avengers movie, which encapsulates the idea behind his assembling the team to, it turns out, a bunch of desktop action figures. That was part of the “Journey Across America” campaign from the company and marked its second partnership with Marvel Studios after also creating cobranded spots for last year’s Guardians of the Galaxy Vol. 2.

Quicken Loans used a cobranded campaign to promote its Rocket Mortgage product. A commercial shows a young woman going through the whole process of applying for and receiving approval on a mortgage—all on her phone, oblivious to the superhero-fueled mayhem happening around her. There’s also a behind-the-scenes video on how the spot was shot.

A co-branded commercial was just part of a larger campaign from the bank to encourage young people to save more money, something they either totally are or totally aren’t doing right now. The landing page for the campaign featured a casual online game where you played as either Captain America or Black Widow, punching invading aliens and getting banking tips at the same time. The campaign also included a couple digital comics available that both featured banking-oriented stories.

The kid-friendly, on-the-go yogurt offered movie-branded packaging that, with two specially marked boxes, gave consumers a free ticket to see Infinity War. A short commercial advertised the promotion by showing a bunch of kids dressed as the heroes trying to use the boxes as currency.

If you really want to confuse Google, search for “infiniti infinity war.” It doesn’t know what to do. That said, the carmaker—no stranger to cross-promotions with Marvel Studios—launched a campaign to support its upcoming QX50, which makes an appearance in the movie. A TV spot starred a couple using their Infiniti to rush to the theater like expectant parents rushing to the hospital. Other exclusive content related to the movie’s story was available as well.

Stand Up To Cancer

The charity worked with American Airlines on a movie-branded campaign where every donation of $25 was rewarded with 10 American Airlines AAdvantage miles. A PSA features some of the movie’s stars talking about seeking help from heroes when you need it; the message focuses not on countering the threat posed by Thanos, but on helping doctors and caregivers provide the treatments people need.

@ChrisThilk
Chris Thilk is a freelance writer and content strategy consultant in the Chicago suburbs. You can find him at ChrisThilk.com, where he shares his thoughts on content marketing, media and movie marketing.