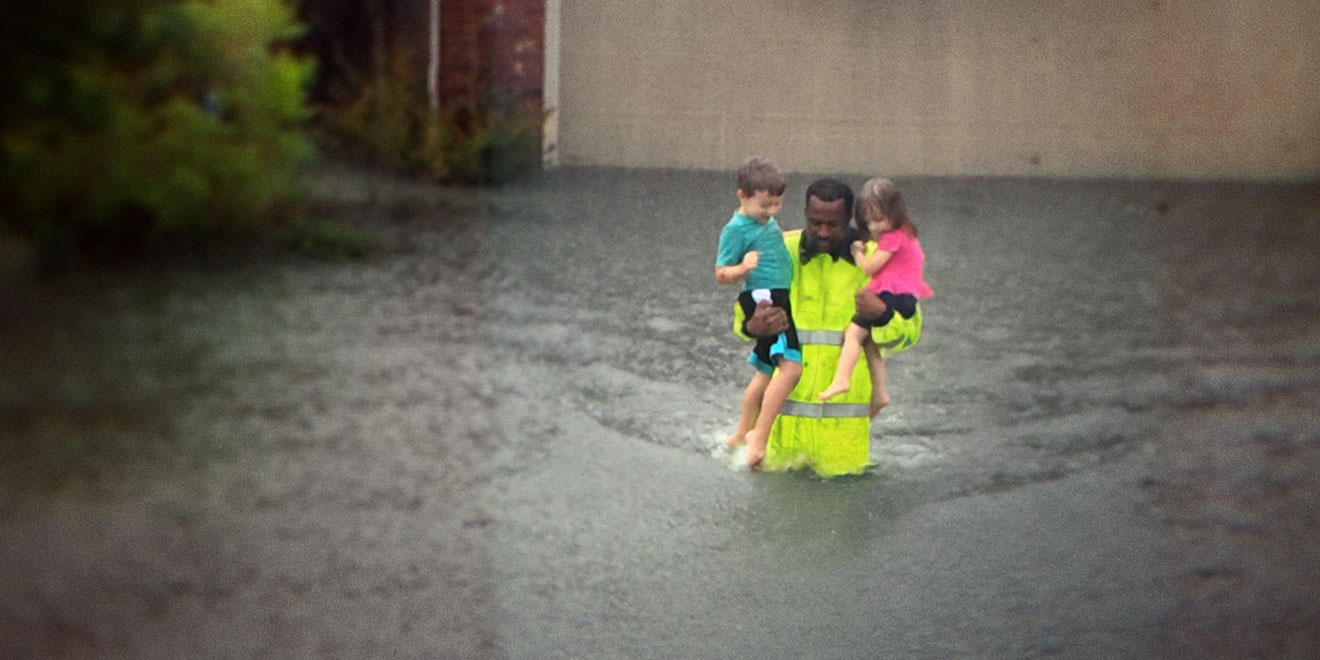 While rivals like T-Mobile and Sprint have been perennial Super Bowl players, Verizon has stayed away from the big game since 2011. But the carrier just made a grand return to advertising’s biggest stage—with a poignant 60-second spot from McCann New York that put the market leader’s familiar claim in a very different context.

The spot, called “Answering the Call,” is a heartfelt salute to first responders—after a year in which they were needed more than ever, given the rash of natural disasters across the U.S.

The ad shows scenes of house fires, floods and medical emergencies. The audio features the people who were helped surprising the first responders by calling them and thanking them, often years after the fact. Onscreen copy says, “They answer the call. Our job is to make sure they can get it.”

The :60 was introduced with a 10-second teaser narrated by halftime performer Justin Timberlake. Both spots pointed to AllOurThanks.com, where viewers are encouraged to thank first responders for their efforts and sacrifices.

Andrew McKechnie, chief creative officer at Verizon, told Adweek that, in contrast to some of its rivals and their comic spots, the company isn’t interested in advertising on the Super Bowl unless it has something important to say. The efforts of first responders over the past year gave it just that reason.

“We’ve always been very involved with first responders,” he said. “They’re part of us, in a lot of ways. We’ve always supported them. The network is obviously a key component of making sure they can do what they need to do. There was just lots of stories that bubbled up this year as we started to hear from our people on the ground. Our network engineers, even our store employees—we had a lot of our own people impacted by natural disasters. We realized there was a broader story to be told there.”

Creatively, the spot takes Verizon’s core marketing message—that it has the best network—and puts it in a more emotional, high-stakes context.

“We’ve been saying for a long time that when it really, really matters, we’re the network to choose. We are America’s most reliable network,” said Pierre Lipton, global executive creative director on the Verizon business at McCann New York. “Usually in our communications that’s about personal frustrations, or a desire to do something with technology. But when we saw these things happening out in the world, it really exemplified what it means when the network has to work—when you have to call on these people who are brave enough to help.”

McCann tapped Emmy-award winning director Amir Bar-Lev and researchers to comb through news articles and footage spanning first-responder rescues over the past 30 years. The agency chose the photographs first, then reached out to both the first responders and the people they helped—to get their permission to be included in the project. Then they orchestrated the thank-you calls that connected them.

“What we loved about using photography—that’s not the usual way you would potentially approach this,” said McKechnie. “You would try to find riveting moving images, and we have some of that in the singular stories [the campaign includes other videos for social]. But the power of the photographs, and narrating around that moment, was something that felt more interesting.”

"Generally what the competitors do is, they play in the gutter. We don't want to play that game. We want to stand tall, as as the leader, put a more positive message out there."
—Andrew McKechnie, Verizon chief creative officer
“Answering the Call” gives customers a different frame of reference about why the network is important, McKechnie said.

“We’ve said it time and time again, but often what we haven’t done as good a job of doing with is explaining what that really means for people,” he said. “It’s not just a boastful claim. We build a strong network, and yes, it’s about being able to pick up the phone and call your grandma. But there are also these really, really important things that we do that are critical and have this massive impact on people’s lives.”

McKechnie added that he’s not too concerned about what rivals like T-Mobile and Sprint might be doing creative on Sunday’s game.

“Generally what the competitors do is, they play in the gutter,” he said. “We don’t want to play that game. We want to stand tall, as as the leader, put a more positive message out there. We’re not concerned with what the competitors are going to do, because it’s probably going to be below the belt. We don’t need to play at that level.”

He added: “We’re not a brand that has beer humor and kids and puppies. You find that spectrum of work across the Super Bowl. For us, we felt like this year we had a really important story to tell.”

Below, check out some of the social videos, created by McCann with help from R/GA, that tell some of the individual stories from the main spot in greater length.