How to Break Free From the Confines of a Creative Rut

Find your inspiration to break the habitual pattern 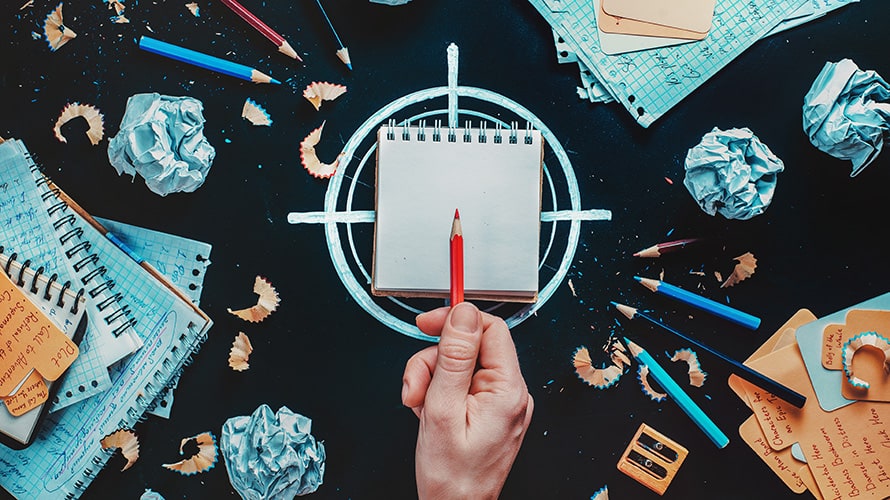 It's easy to find yourself in a creative rut—breaking out of it is the hard part.
Getty Images
Share
By Meredith Cooper
|
July 31, 2018
Share

“Creativity is just connecting things,” Steve Jobs famously said. While it’s true the best creative ideas can be generated out of something you’ve already seen and connecting those pre-existing experiences to come up with something new, it’s not always that simple. We’re creatures of habit and often get stuck in the familiar, which can lead to creative ruts.

There’s a lot of value in putting certain functions on autopilot, like tackling your biggest project first thing in the morning or checking email at designated times throughout the day. But as creators, many aspects of our jobs shouldn’t be left to habit. The key to breaking habits lies in breaking the patterns themselves. So, when you’re banging your head against the wall because you’re fresh out of ideas, here are three easy ways to find inspiration and avoid creative ruts.

Be mindful and take action

A 2012 study at MIT showed that a small part of the prefrontal cortex acts as a sort of control gate for habitual routines, triggering the formation of and slightly favoring new habits. You limit your creativity if you don’t constantly challenge your way of thinking and acting. The solution? Begin to recognize your subconscious patterns by being mindful of the trends that result. Then make note of it and do things differently.

The key to breaking habits lies in breaking the patterns themselves.

This could be as simple as changing your environment. For example, if you work predominantly on a computer, get outside (be it a walk, hike or run) and gain inspiration from your new surroundings. You can also consider changing up your daily routine. If you normally start your day by checking email, maybe instead start by grabbing coffee with a colleague and brainstorming a new idea you have.

Minor tweaks can make a big impact; you just need to be mindful of your current patterns and habits in order to unlock the possibilities.

Great teams inspire a drive in us like no other. There are fewer things more satisfying in the workplace than working through a big project or issue as a team and coming out victorious on the other side. But teams can also be a source of ruts due to the consistency they encourage.

Creating opportunities to engage with other creatives (and frankly, non-creatives) outside of your direct team can give you different perspectives and insights into how other teams tackle challenges, create processes and get inspired. One idea is to find a relevant person outside of your team to join your meetings once a month and offer an outsider’s perspective. This exercise can help you come up with new, creative solutions that you might not have been able to see because you’re too close to what you’re working on.

Another idea is to host an internal creative session where you invite people from different teams to rally around a common business problem or company initiative. Break people up into teams,—ideally with people outside of their immediate organization—and have them work together toward a common goal or project. This not only gives creatives the opportunity to infuse creativity from people outside of their normal team but also helps everyone explore new ways of working creatively.

Keep in mind that great ideas don’t only have to come from within your company. I also suggest asking for feedback from your customers and communities to understand what they want to see differently.

Curiosity is important in any creative profession and can help creatives gain new paths to inspiration and avoid ruts. A good way to satisfy curiosity is to learn a new skill. You can keep it to something within your current role. For example, 2D/3D compositing is a newer skill for graphic designers across industries. Learning how to create simple photorealistic model shots can help them flex new creative muscles, experiment with new storytelling techniques and visualize their products much more efficiently. Or you can expand the new skill beyond your current role, like taking up video editing if you’re a web designer by trade.

Creative inspiration can also come from outside of the workplace. Learning a new skill that interests you personally, like playing the piano, can spark some versatility in the way you think about your approach to projects or challenges. Gaining a new skill regardless of if its within your discipline or not gives you the opportunity to seek out new avenues for creative expression and can help fuel the creativity needed within your day-to-day role.

Creative ruts happen, but you don’t have to remain stuck. If you’re open to new ways of thinking and acting, good things can happen.

Meredith Cooper is the director of product marketing at Creative Cloud Enterprise.