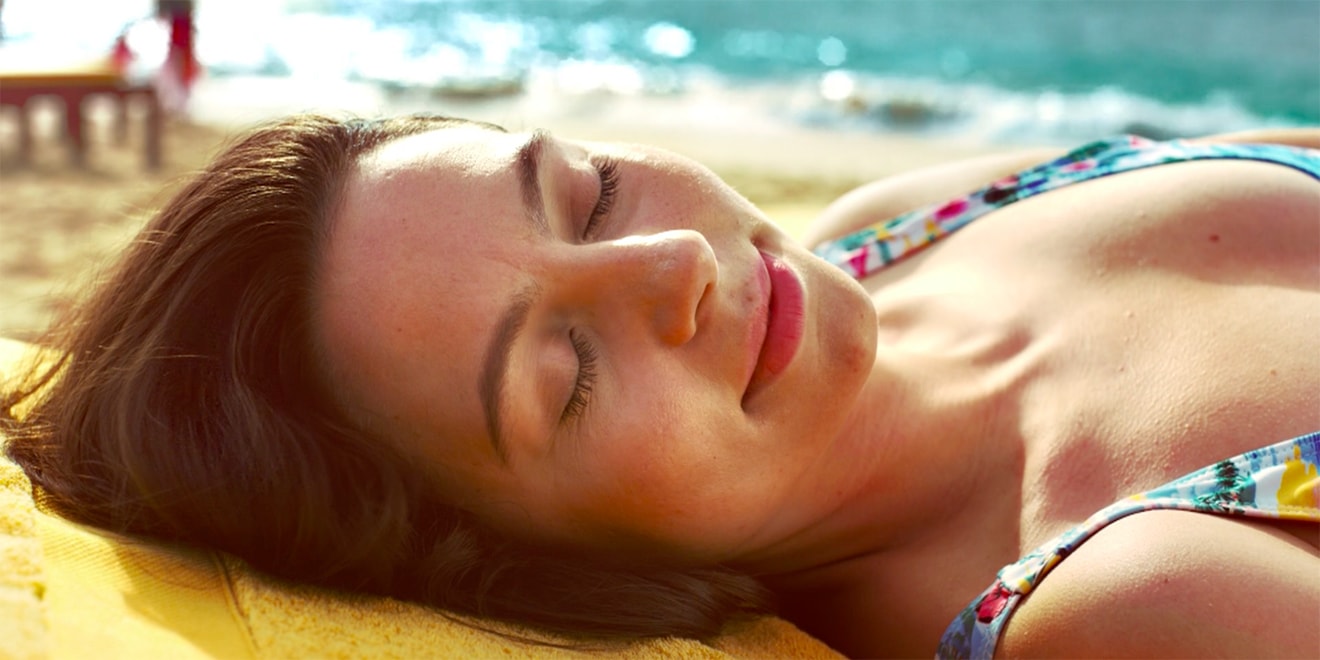 In UK booking site On the Beach's new campaign, Sally finds solace after a week of surprising revelations about her parents' sex lives.

We all know lying in the sun can take a lot of things off your mind. But just how much?

A new campaign from London agency Uncommon hopes to provide the answer in cringe-inducing detail. The work is the agency’s first for U.K. booking site On the Beach and contrasts serene images of blissful vacationers with the stories of their terrible, horrible, no good, very bad weeks.

Each spot is narrated by punk rock legend Iggy Pop, which might seem a tad random unless you’re the kind of ad nerd who knows that Uncommon co-founder Nils Leonard interviewed—and disrobed with—the singer on stage at the 2016 Cannes Lions while Leonard was still with former agency Grey London.

“The excellent team at On the Beach shared our ambition to really mess with a predictable category,” Leonard says. “One killer shot, with Iggy’s beautiful gravel over the top, will stand out a mile in the clutter of Christmas. This campaign is all about creating the space to tell some properly naughty stories. Sometimes, words just win. You can do in a spoken story what you could never do in picture.”

The campaign’s centerpiece is definitely the story of “Sally,” who has recently learned that her parents are up to a lot more than she’d ever imagined:

The agency even decided to extend the ad’s story by actually creating the microsite mentioned in the story, TheSuburbanCowboys.com. As you might guess, it’s a bit more PG than Sally’s tale would imply.

Each ad uses stillness, one of video advertising’s rarest tactics, to highlight the absolute calm that a beach vacation can instill in even the most stressful travelers.

The ads and the campaign’s banner ad extensions pay off the booking site’s tagline, “Everything’s Better On the Beach.”

“This campaign focuses on the healing and restorative power that the beach holds, along with its ability to alleviate the host of daily frustrations and scenarios that modern life can throw at us,” says Alan Harding, marketing director for On the Beach. “The series of adverts captures the sense of calm and stillness that can only really be achieved on a beach holiday.”

The ads began running this past weekend, and versions will appear in radio, cinema, out-of-home and video streaming. A dedicated push is planned for Christmas day, as well, capturing Brits at a time of peak cold and peak stress.

As for Iggy Pop, his relationship with advertising goes back quite a ways, with his track “Lust for Life” memorably being used in the early 2000s ads for Royal Caribbean. (At the time, Adweek wondered if it was “the worst ad song ever”.) More recently and less problematically, Pop was the voice of a bold 2015 H&M sustainability campaign that challenged longstanding “fashion rules” and helped lead the charge for better LGBTQ representation in advertising.