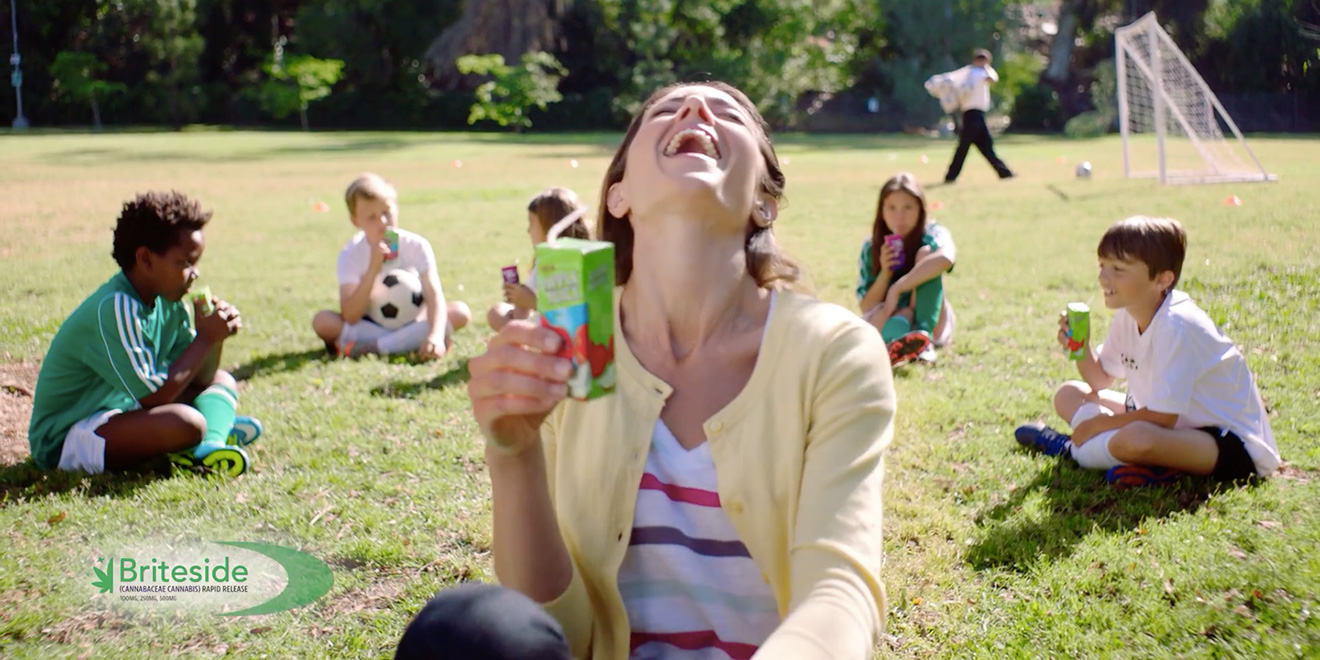 Life can be a real buzzkill. There’s the mortgage to stress about, the tiger moms to compete with, the kids and the aging parents to care for. What does a Gen X gal with a little disposable income have to do for some relief around here?

Subscribe to a marijuana delivery service that can send over “the dankest herb” and “the real sticky icky,” and fire one up. Sweet bliss!

A new digital ad, launching today, introduces Briteside, a startup in Oregon that delivers weed in as little as 90 minutes to residents of Portland, Bend and Ashland (there’s an in-store pickup option, too). It also offers an ongoing service called Discovery Box that adds an extra personalized goodie to regular shipments.

The 90-second video, like SNL skits that have come before it, mimics now-infamous pharma ads in its look, tone and voiceover. That was a conscious decision by Los Angeles agency Sandwich Video, creators of the popular HP-sponsored satire Computer Show, whose execs watched years’ worth of pharmaceutical ads on YouTube to get the parody just right.

It’s so spot-on that they purposely inserted “This is a real company” into the narration, so consumers wouldn’t dismiss it as a fake ad.

“We didn’t want this to come across as a really well-produced joke that wasn’t to be taken seriously,” said Adam Lisagor, agency founder. “If people thought they were just watching a funny video and didn’t think it was a real product, that would be the worst thing to happen.”

Because the product category is still “somewhat controversial,” it meant Sandwich and Briteside could “take a few risks,” he added.

“We wanted to take advantage of all those aesthetic tropes of pharmaceutical ads,” Lisagor said, noting that they haven’t changed much over the years, especially the spots for anti-depressants. “When you have a set of reference points to draw from, you can explode it from there for a new purpose.”

Because of legalities in cannabis marketing, the video debuts on YouTube and Briteside’s website only. Execs think its cheeky approach will garner social sharing.

Over the course of the spot, its female 30-something star goes through a journey from burdened and anxious to delighted and, literally, rolling on the floor laughing. She plays guitar for her elderly (also stoned) dad, who thinks she’s “the wizard.” (Her too-long stare and too-wide smile at the pot delivery guy are priceless.)

The digital short comes with a de rigeur list of side effects, read at a familiar speedy clip. Instead of bloating, constipation and other conditions typically usually ticked off during such legalese, smoking weed may cause “existential well being and relentless optimism, uncontrollable giggles, euphoria, increased appetite and elevated sensitivity to musical dopeness.”

“Ask your doctor if cannabis is right for you,” the voiceover advises. “It probably is.”