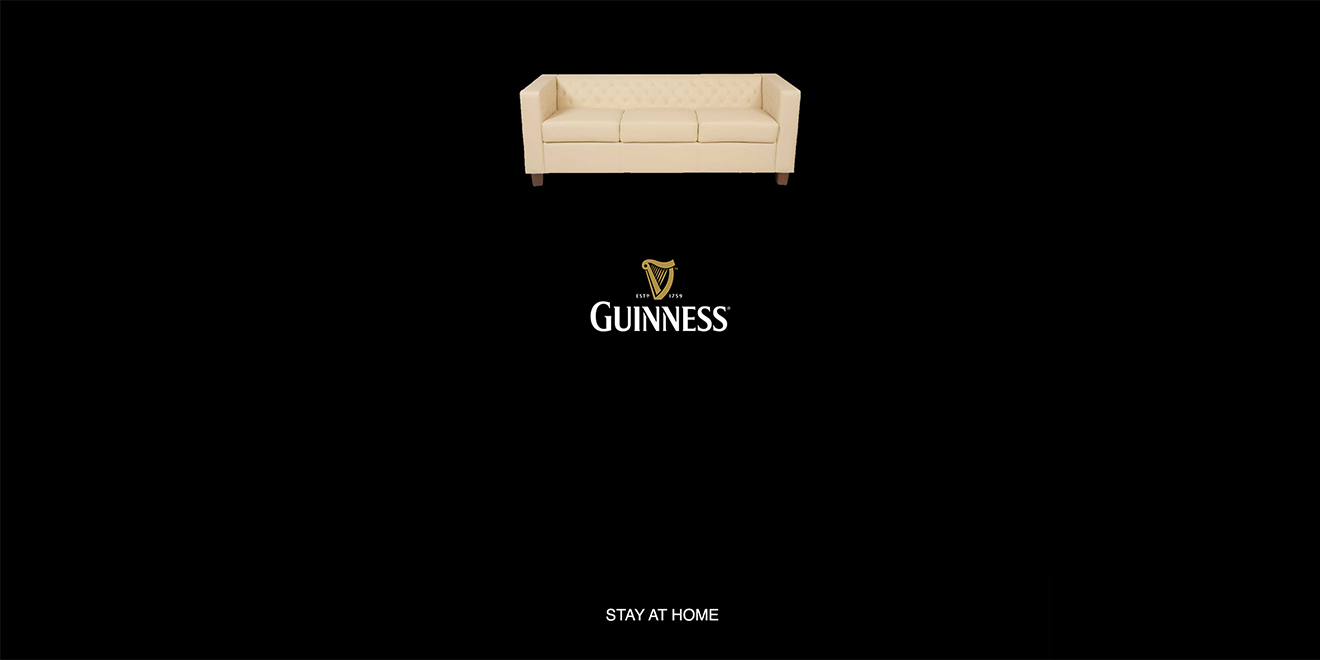 Irish freelance copywriter Luke O'Reilly created the ad as part of a One Minute Briefs challenge. - Credit by Luke O'Reilly

The praise for Guinness was effusive and abundant. The brand had created a flawless marketing move aimed at keeping people quarantined at home rather than out spreading the coronavirus that causes COVID-19.

Just one problem: The brand had nothing to do with it.

The digital poster, which creates a negative-space outline of a pint glass by topping it with a couch and placing the phrase “Stay at home” at the base, was a spec creation whipped up quickly by Irish freelance copywriter Luke O’Reilly. But as the internet is wont to do, his credit was conveniently dropped as the image soared across Twitter, LinkedIn and Reddit on Monday.

“The comments were just hilarious,” O’Reilly told Adweek from the West Cork home where he’s sheltering with his parents. “Loads of stuff like: ‘Guinness did it again! Masters of marketing! Guinness is great!'”

But O’Reilly said he wasn’t too upset to see his creation exploding across the internet without being linked to its creator.

“My mother was going: ‘You need to get the credit for this!’ As I said to her, as long as the message was getting reinforced, I was happy,” he said. “It didn’t get to me as much as I thought it might. Maybe I knew in my heart people would find out I did it anyway.”

However, in a recent development, Guinness gave O’Reilly the credit he deserves, sharing the work on the brand’s official Instagram page. 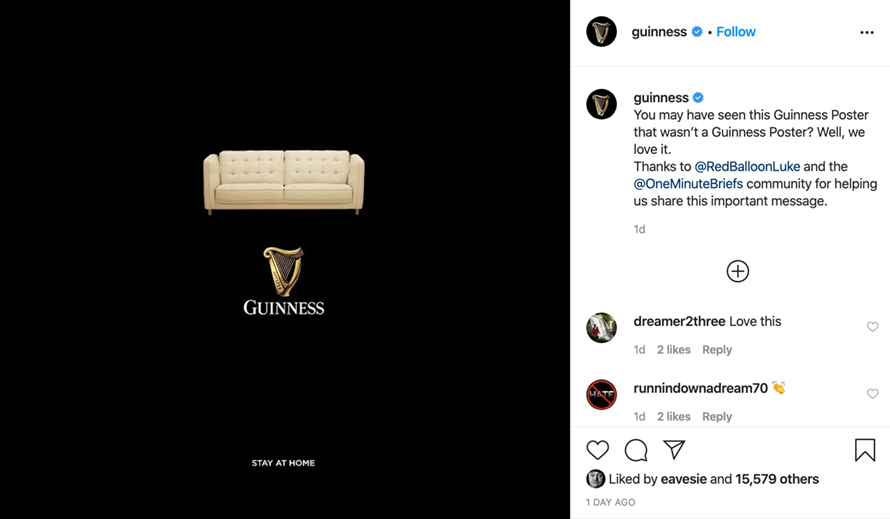 O’Reilly created the image as part of a challenge by One Minute Briefs, a U.K.-based creative project that prompts current and aspiring advertising talents to “respond with instinctive ideas” to ideas that often have a social-responsibility aspect. This time, the brief was to create pub posters that, somewhat ironically, discouraged pub outings. The project was aimed at promoting The Staying Inn, a virtual pub founded by British creatives Olivia Downing and Sophie Stevens to help keep people motivated to stay under quarantine.

Since going freelance about two years ago to focus on other aspects of work such as voice acting, O’Reilly said he’s often found himself drawn to the creative challenge of One Minute Briefs.

“I’ve been moving away from advertising and more into performing, but I keep getting dragged back into it,” he said. “If there’s no creative output, I start to go a bit mad. That’s why I love One Minute Briefs.”

While most responses to One Minute Briefs show creative potential but understandably half-baked execution, O’Reilly’s was essentially flawless. That’s especially surprising given that he’s a copywriter whose friends have often poked fun at him for “how shit my scamps are.” Although O’Reilly’s credit was delayed a bit as the poster worked its way through social media, his idea and quick craftsmanship were certainly getting appreciated in absentia.

TBWA\Chiat\Day New York CEO Rob Schwartz tweeted: “Saw it in my feed and it restored my faith in advertising.”

Even though I share the opinion that brands should lay low with Coronavirus marketing - this is my favorite ad/message - pic.twitter.com/EcVvLzqI21

On LinkedIn, Liverpool agency Seed to Branch wrote: “It was simply a matter of time before Guinness came up with something creative, they always hit the spot!”

After learning who was really behind it, the agency edited its post to credit O’Reilly and One Minute Briefs.

For O’Reilly, one of the most thought-provoking compliments came via messaging platform WhatsApp, where a friend wrote him, “Well done, you beat the system!”

Over the course of the day, he thought about how that comment captured the value in a creative idea that comes from an unexpected source.

“The coronavirus doesn’t care about a system,” he said. “It’s not advertising through a system that’s going to help stop this. Maybe it’s just an ad from a person.”