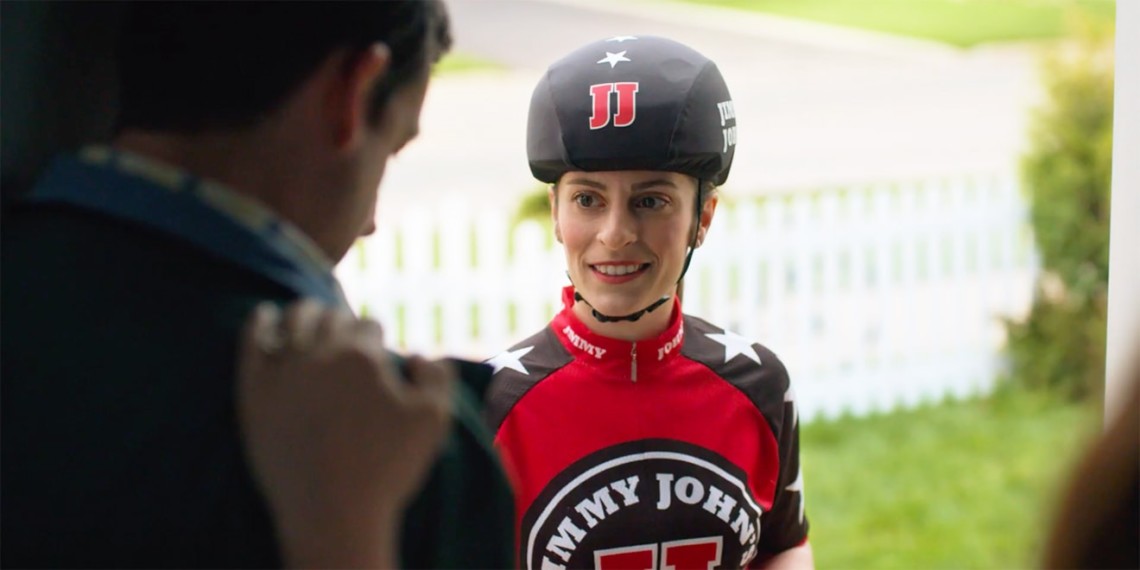 You can't get a Jimmy John's sandwich delivered beyond a 5-minute radius from the store. So maybe the chain can relocate you closer? - Credit by Jimmy John's

Jimmy John’s execs, I hope you’re ready to be flooded with entries for your “Home in the Zone” contest.

After all, there’s a housing crunch going on across the country, especially in desirable cities, and a prize of $250,000 to spend on a home could make plenty of folks salivate, whether or not they’re devotees of your salami and double cheese subs.

The chain is launching the sweepstakes today with a campaign from agency WorkInProgress that focuses on its policy of delivering food only within a limited, 5-minute radius of its approximately 2,800 stores.

According to the launch ad, some fans go to great lengths to get Jimmy John’s delivered, including setting up a faux residence, complete with white picket fence. Their cover is blown (the flimsy facade crashing to the ground), but not before they have their subs in hand.

But what if they could actually live in a sandwich-supplied neighborhood? To enter, consumers outside the zones will need to write 250-word essays (presumably impassioned, clever or groundbreaking), and 500 will be chosen at random and then judged on their content.

The restaurant “can’t deliver sandwiches to our customers who live outside of our delivery zones, but we can deliver our customers to our sandwiches,” says CMO John Shea, a PepsiCo veteran.

The stunt comes at an interesting time, no doubt not lost on the brand, when the median home listing price is $226,800, according to Zillow. The number varies greatly by state and has ballooned since the 1960s, when it was $11,900, or $96,681 adjusted for inflation. Rents are also skyrocketing.

Meanwhile, the Illinois-based Jimmy John’s, founded by 19-year-old Jimmy John Liautaud in 1983, has made a point of not using popular delivery services like Uber Eats and DoorDash. The $13 billion third-party food-delivery business is growing, but the marketer notes that 35% of customers say they had problems with such deliveries and “76% hold the restaurant partially responsible for those errors.”

Hence, Jimmy John’s “would rather buy someone a house than deliver them a not-fresh sandwich,” says WorkInProgress partner and creative, Matt Talbot. “If that isn’t a commitment to being Freaky Fast and Freaky Fresh, I don’t know what is.”

Media buys will include national TV on some 30 networks including ABC, FX, TBS, ESPN, Bravo and CBS, and digital and social platforms Facebook, Instagram, YouTube and Hulu. And those who are already in Jimmy John’s-adjacent locations aren’t left out. Five winners will get free sandwiches and free delivery for a year.