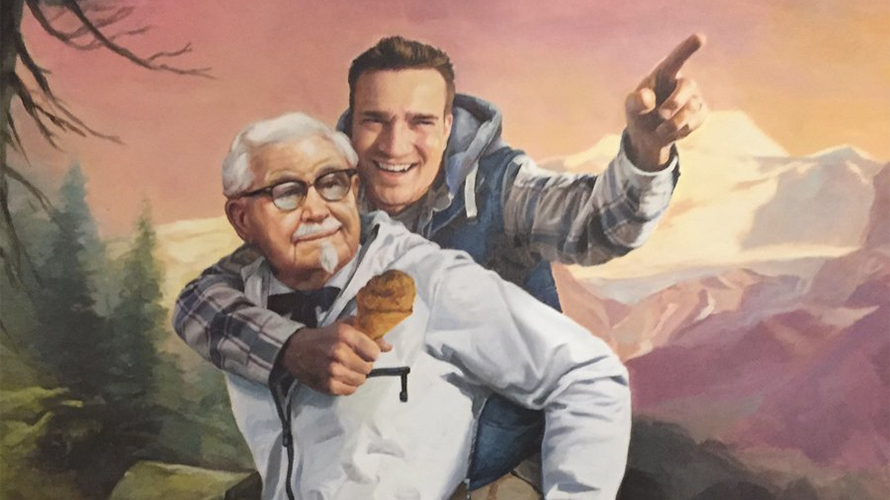 Being an eagle-eyed Twitter user can occasionally have its perks, though admittedly they can be very, very odd perks.

11 Herbs & Spices. I need time to process this.

His unassuming tweet about the discovery, made about a month after the stunt was quietly placed by agency Wieden + Kennedy, has since exploded to 322,000 retweets and 715,000 likes.

But fleeting Twitter fame wasn’t the only reward in store for Edgette. This week, he announced (on Twitter, of course) that he’d received a framed, custom painting depicting him piggyback riding Colonel Sanders in a majestic natural landscape: 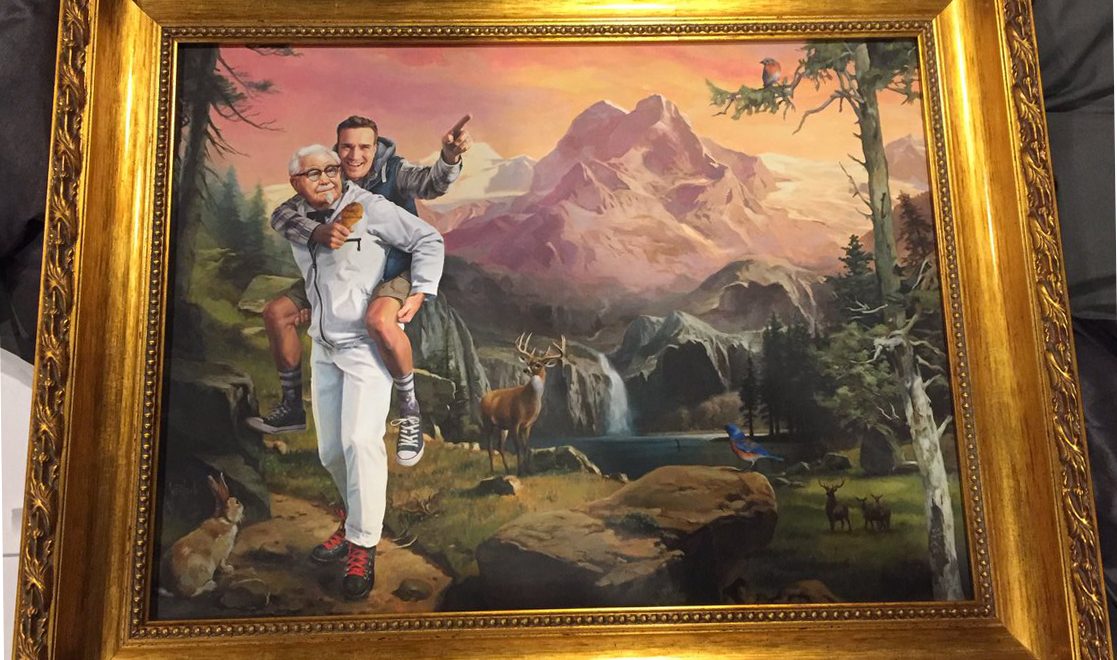 Mike Edgette via Twitter
Such artistic creations aren’t new for the brand, which also worked with W+K to publish a romance novel, complete with sleeveless, chiseled Harland Sanders, for Mother’s Day 2017.

The portrait of Edgette was clearly more specific in its intended audience, though it once again proved that sometimes the best reach on a marketing effort can come from the tightest targeting.

On Reddit, an image of the painting soared to the top of the site’s front page, generating more than 3,300 comments. In true Reddit style, many were dubious or even conspiratorial about whether Edgette was in on the stunt from Day 1, with the key evidence apparently being that he works for a PR firm and also tweets often about his love of KFC sister chain Taco Bell.

“So apparently I’m an undercover spy that works for @kfc and/or @WiedenKennedy,” Edgette noted in a tweet linking to the Reddit thread. “Weird. I feel like I would know that. But I guess the Internet is smarter than me.”

UPDATE: There may only be 11 herbs and spices, but there seem to be countless conspiracy theories about KFC’s stunt and Edgette’s role as the honoree.

Adweek’s Kristina Monllos talked to Edgette about the theories that his Sioux Falls-based PR company works with KFC  (it doesn’t, but would certainly love to), that his discovery of the stunt was pre-planned by the brand and W+K  (all involved say no), and that it seems suspicious he also tweets about KFC sister brand Taco Bell (“I like Taco Bell and I’ve never tweeted about KFC prior to this whole thing.”).

But others say the brand ignored a woman who noticed the Twitter stunt several days before Edgette.

KFC follows 11 people.. 5 of them are members of the spice girls and 6 of them are guys named Herb.

While her discovery went unheralded at the time, like a modern-day Aristarchus overshadowed by a fast food loving Copernicus, KFC says it did send her a congratulatory package of her own:

Nobel cause, but we contacted her weeks ago and are sending her a nice gift.

But wait, there’s another twist! Even @laurelbartlettt wasn’t first. One of the Herbs followed by KFC spotted the gimmick shortly after the brand pulled the stunt:

Well, @HerbScribner actually figured it out before either of them. The day after we did it, in fact.

To KFC’s credit, instead of just letting the kerfuffle blow over without comment, it’s been pretty open about responding to those who feel something was amiss.

And even crazier, turns out someone came up with a version of the joke in 2009. Basically we're all bitin each other's style.