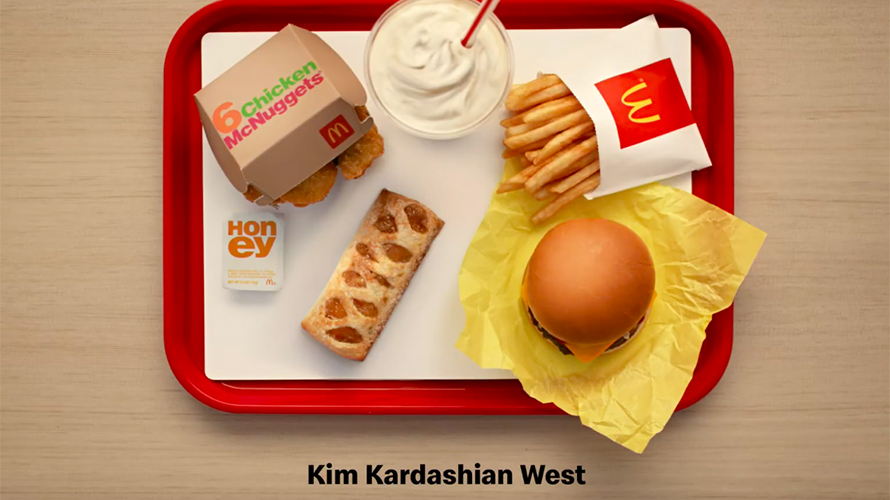 The spot features the preferred orders of celebrities, athletes and even some fictional characters. McDonald's

The Wieden + Kennedy era of McDonald’s advertising has officially begun, but sadly you won’t see the fruits of the high-profile relationship during the Super Bowl itself. If you tune in early, however, you might catch the brand’s fun 30-second spot about “Famous Orders” when it airs before kickoff.

The minimalist and pause-worthy pre-game ad celebrates the product preferences of a wide range of notable figures—some real and some simply memorable from fiction.

Opening with some serious pop culture cachet, the ad first features orders for superstar couple Kanye and Kim Kardashian West, followed by Whoopi Goldberg and Magic Johnson. And while there are quite a few more A-listers in the mix, the spot wisely begins to sprinkle in some clever references to everything from storybooks to the McDonald’s mascot pantheon.

The Super Bowl pre-game will definitely be the largest platform yet for the relatively young U.S. partnership between McDonald’s and Wieden + Kennedy New York, which won the account in September (a massive win that helped lock in W+K as Adweek’s U.S. Agency of the Year.)

But the agency’s first work—also somewhat minimalist in its own way—rolled out earlier this month during the Grammy Awards broadcast. The spots, narrated by Brian Cox (who sings the jingle that Justin Timberlake had been singing for McDonald’s for a long time), practically worship the various components of the Quarter Pounder with Cheese.

The work under W+K New York marks a transition into what McDonald’s describes as “latent emotion” for the brand and its products. Creatively, the work so far seems to show how the chain’s creative approach will focus on the food in a detailed way without losing the humanity and warmth that McDonald’s has always strived for with its work.