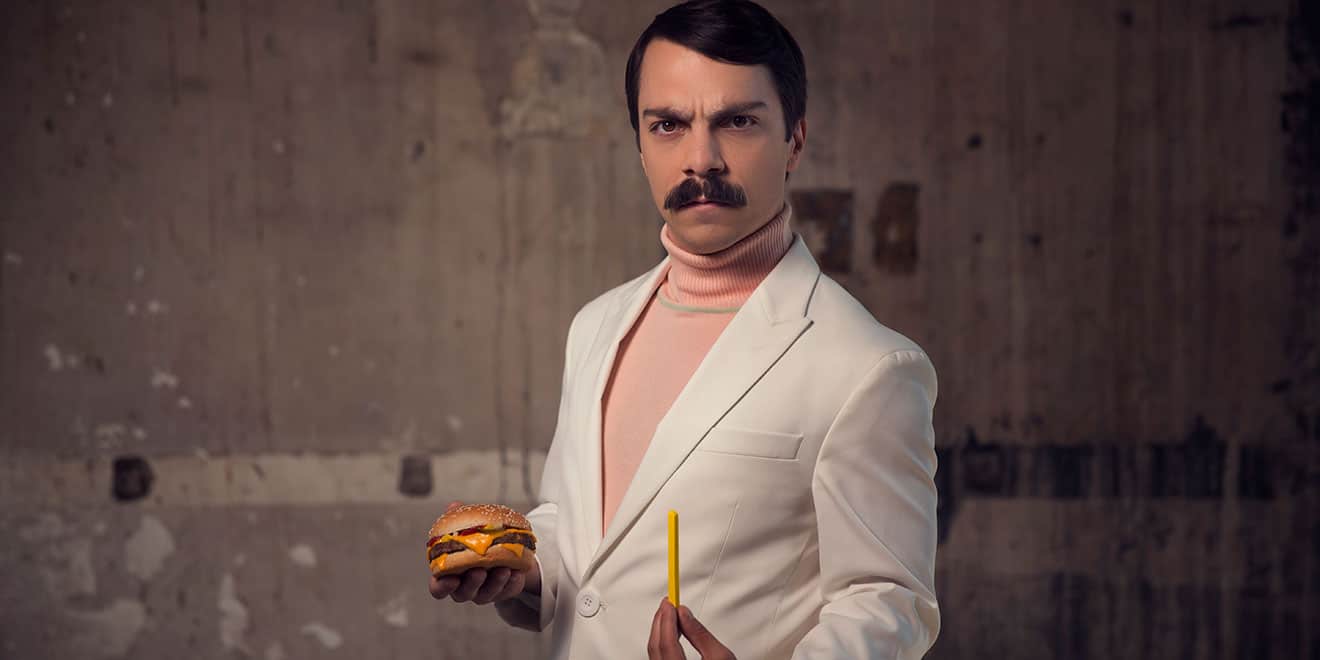 McDonald's won't let anything come between a juicy burger and your perfect selfie.
McDonald's
Share
By Katie Richards
|
June 19, 2018
Share

Picture this—you want to take a killer selfie, but you’re already enjoying a delicious and juicy burger, and you have a serious case of ketchup fingers. Don’t worry—McDonald’s has a solution to this timeless problem, just in time for National Selfie Day, this Thursday, June 21.

Cue the “Frylus.” It’s a handy stylus in the shape of a French fry, and it’s here to help you take your burger selfie game to the next level, while keeping your precious smartphone screen pristine and clean (because, after all, you’re a person, not an animal).

The brand is hyping its invention with a wonderfully melodramatic, snarkily artsy 60-second trailer for the product that might just sell you on the idea. The spot features Instagram persona and faux-Kardashian brother, Kirby Jenner, as the new Frylus spokesperson, and reads as much as a send-up of pretentious fashion advertising as it does a goofy promo for another piece of plastic the world surely doesn’t need.

To be fair, the fast food chain is using to the Frylus to promote its “100% Fresh Beef Quarter Pounder,” which is supposedly hotter and juicier than its predecessors—meaning the tool should be particularly helpful to anyone who might be enjoying the new patty.(McDonald’s will be giving away 100,000 of the french fry tools on Thursday, at more than 2,000 locations. (You can find them all here.)

The ingenious invention also comes one year after the brand created the revolutionary Frork. While that predecessor—a fork made out of french fries—was amusing enough, the Frylus might actually come in handy, if your thing is taking lots of selfies while stuffing your face.

Kirby Jenner, whose Instagram profile describes him as an “amateur model” and “fraternal twin of Kendall Jenner” has attracted attention from publications like Teen Vogue and Vice’s i-D, which this year profiled his “very real, totally not fabricated” life alongside the real model. Now, the parody account is also promoting the Frylus to its some 937,000 followers, used to soaking up images of Kirby hilariously photo-shopped alongside more famous members of his “family”—at the toy store, on the red carpet, in haute campaigns and beyond.

“You guys ever sit in your car and try to take a selfie but your hands are messy from the new 100% fresh beef Quarter Pounder from @McDonalds? And then you drop your phone and it gets stuck in between the seat and the center console, never to be seen again? Well, you’re in luck cause I’m now the friggin face of a french fry stylus… the FRYLUS! Literally the only way to take selfies while eating your Quarter Pounder on #NationalSelfieDay 6/21,” reads an Instagram post featuring the Frylus video.

Overall, it’s not much of a risk for an everyman chain restaurant to poke fun at snooty fashion tropes. But it’s still fun to watch, and teaming up with the jokester is a smart, self-deprecating tack for the brand. The ad, created with Golin, fittingly ends with two breathy whispers, informing viewers both that footage of one Kirby Jenner kissing another Kirby Jenner on the cheek stands for “artistic integrity,” and that the final scene—a burger floating on screen next to a smartphone and a Frylus—is a “product shot.” In fact, the team was so committed to seeing the gag through to the bitter end that it extended it all the way into the production credits—with every member providing only a first name, except for the very last contributor—one Sean Fazende, responsible for “jungle noises.”