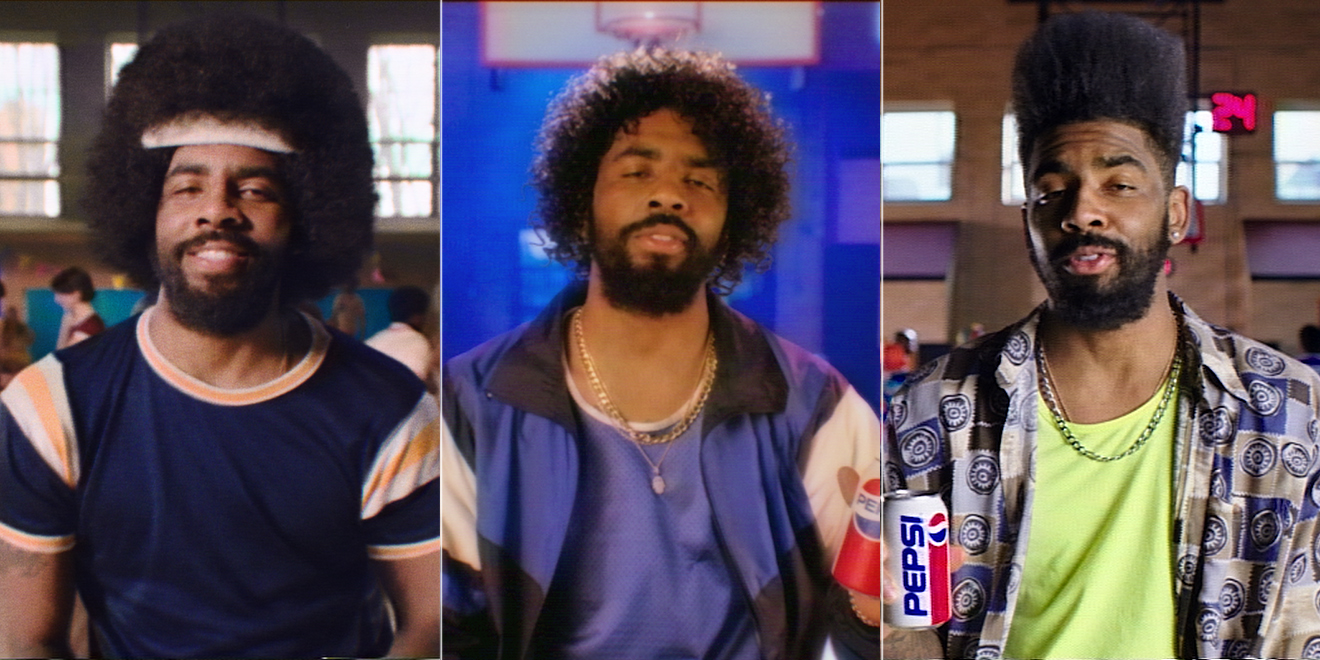 Kyrie Irving shows us the many looks of his Uncle Drew character over his (fictional) career. - Credit by Pepsi

Uncle Drew is back, this time to hype his new movie—and Pepsi, as always.

Pepsi’s feature film, distributed by Lionsgate and starring Kyrie Irving as a cranky, silver-haired baller, is due to hit theaters June 29. A new 30-second trailer of sorts, “Timeless” from Pepsi’s Creators League Studios, looks back at the character through the decades—relentlessly hawking the beverage along the way.

“Nothing works up my thirst for an ice cold Pepsi-Cola like getting buckets,” says the Boston Celtics point guard, in character as a 1970s version of a young Uncle Drew, complete with a dramatic afro, while people roller disco on the court in the background.

“Whether I’m breaking ankles, or I’m breaking hearts,” adds ’80s Uncle Drew, rocking era-appropriate Jheri curls and a tricolor nylon track suit, “it always brings the refreshment.” Flashing forward to ’90s Uncle Drew, he says “and I’ve been drinking it a long time” from underneath his hi-top fade.

Fast forward to present, and he’s back to schooling younger players on the court. Asked how old he is, the fake-old and surprisingly nimble version everyone has come to know through Pepsi Max’s series of viral ads over the past five years, replies: “Doesn’t matter.”

The real answer is a little less vague—somewhere in his 70s—but his point is well taken: All that counts is that he isn’t young.

Overall, it’s a deft and entertaining little spot, especially for one that manages to pack in so much product. The Pepsi cans themselves track across eras, with the package design evolving—true to history—as Irving rolls through each new getup.

The movie, produced by Temple Hill Entertainment (The Twilight Saga; “The Fault in Our Stars”) in partnership with Pepsi, will feature a slew of other basketball notables including Shaquille O’Neal, Chris Webber, Reggie Miller, Nate Robinson, and Lisa Leslie, all helping Uncle Drew prove that a team of seniors can still own the court—a storyline that will be familiar to people who’ve seen the character’s ads.

“After draining his life savings to enter a team in the Rucker Classic street ball tournament in Harlem, Dax (Lil Rel Howery) is dealt a series of unfortunate setbacks, including losing his team to his longtime rival (Nick Kroll),” reads a synopsis of the film included in Pepsi’s release. “Desperate to win the tournament and the cash prize, Dax stumbles upon the man, the myth, the legend Uncle Drew (NBA All-Star Kyrie Irving) and convinces him to return to the court one more time.”

Mostly what the whole endeavor says, though, is never miss an opportunity to milk a hit.