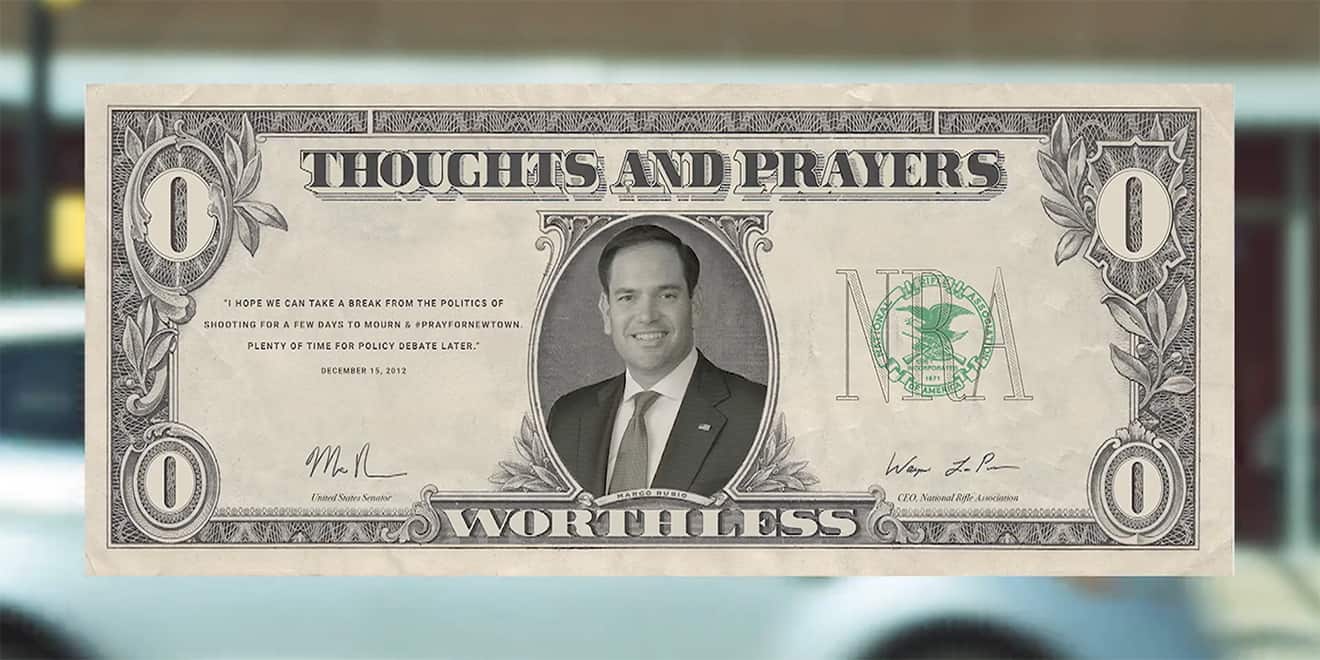 There’s a common refrain among conservative politicians in the wake of mass shootings involving sending “thoughts and prayers” to families of victims and others impacted by these tragedies.

A group of creatives teamed up to launch a campaign assigning a precise value to these “thoughts and prayers”: absolutely nothing. For their “Real Gun Bill” campaign, Bentley University MBA student and freelance copywriter Sai He, FF (formerly Fred & Farid) New York junior copywriter Gabriel Sehringer and BBDO New York junior art director Justine Pelayo created mock zero-dollar bills featuring the images of nine U.S. senators, who receive a large amount of funding from the NRA, and their contact info, accompanied by the words “Thoughts and Prayers” to quote their response to gun violence tragedy. They then circulated bills of Marco Rubio around New York City and Boston, leaving them near banks and ATMs and passing them out on the N, R and A trains in New York. As of this Tuesday, 1,000 bills were passed out.

He and Sehringer met via Modern Copywriter. Sehringer reached out after the Marjory Stoneman Douglas High School shooting to ask if He would be interested in working on a project related to gun reform.

After each gun violence tragedy, Sehringer said, he noticed a pattern: “outrage and shock,” followed by “lawmakers sending their thoughts and prayers” and “ultimately nothing would happen and there’d be no change, and then there’d be another shooting, a month later, two months later.”

“There hasn’t been any meaningful legislation that has been passed,” he added. “We just wanted to find a way to do our small part to help.”

Deciding that they “wanted to make any difference, no matter how small,” they realized no one had created a project playing off the meaningless “thoughts and prayers” response employed as a reaction by so many politicians. They set out to create something to “symbolize very clearly how little it means.”

He added that the approach also calls out “the utter hypocrisy of these lawmakers that get all this money from the NRA.”

Sehringer and He reached out to Pelayo to finalize the concept and help bring it to life. That proved more difficult than anticipated, as legislation around reproducing currency meant they had to tread a fine line in making the bills as realistic as possible without being so realistic that they violated federal law. Ultimately they had to ensure the bills were 10 percent larger than U.S. dollar bills and looked different enough that they wouldn’t be confused for actual U.S. currency. 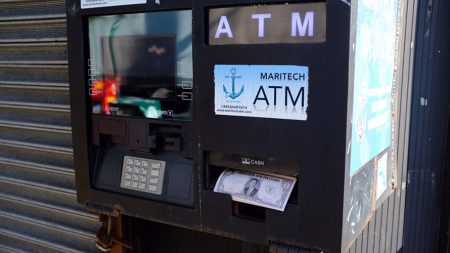 “Since it’s not legal to design a new bill, [Pelayo] had to piece together, essentially, a photo of a real bill as well as she could, pull that in and recreate and then edit all the original elements,” Sehringer explained.

Since printing bills of all nine senators would have proved considerably more costly, they decided to focus on Marco Rubio. In researching the project, Sehringer explained, they found six separate instances of Rubio offering “thoughts and prayers” following mass shootings, also citing the recent spotlight on the Florida senator’s lack of action following the Marjory Stoneman Douglas High School shooting.

Bills for the other eight senators can be found on the campaign landing page and shared on social media. Each bill contains contact information for the senator so that viewers can contact them and demand they introduce gun control legislation.

Sehringer noted that Whitehouse Post and its editor Devin Stevens were instrumental in creating the video for the campaign, going through a painstaking editorial process. SixtyFour Music also contributed an original composition and Wave Studios NYC worked on the sound design.