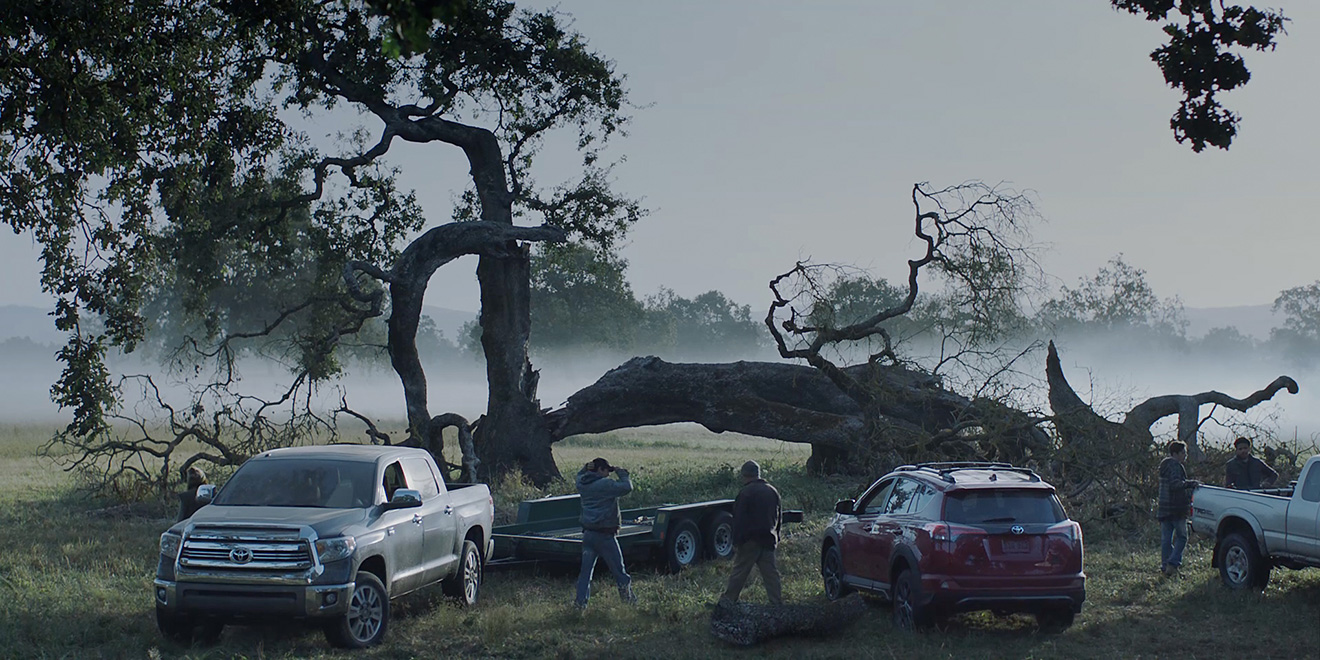 Toyota’s holiday Toyotathon commercials aren’t exactly known for their subtlety. They usually punch you in the face with holiday cheer, 30 seconds at a time.

This year, though, the automaker and agency Saatchi & Saatchi have tried something new—both in content and format. Last night, they aired a 100-second commercial on NBC, which they claim is a first for broadcast, that leaned heavily into more emotional storytelling.

The spot, titled “R+S,” was directed by Lance Acord of Park Pictures (whose extensive ad credits include being an Emmy-winning director as well as the cinematographer on Volkswagen’s “Pink Moon” ad). The ad features an evocative, multigenerational story about a family—and the tree they have loved for decades.

Check out the commercial here:

It’s a real family of actors who star in the ad—grandparents, their daughter and her husband, and their children. Acord filmed in Northern California in Sonoma County, and cast a family from Santa Rosa.

“The story comes to life because it represents real families,” he said in a statement. “The central point of the narrative, the tree, is also a metaphor for life and the underlying theme of a matriarch passing on the torch from one generation to the next.”

The spot aired last night, right after The Voice and right before the fall finale of This Is Us. Toyota says the ad was intentionally shot in a style similar to This Is Us.

“The natural connection with Toyota’s new creative and such a powerful night of family viewing illustrates the power of contextual messaging which still reigns king,” said Linda Yaccarino, chairman of advertising sales and client partnerships at NBC Universal. “Engaging, emotional creative combined with the unparalleled environment of television is the ultimate platform for a marketer to reach audiences at scale and enhance the consumer experience.”

“The winter holiday season seems to get longer every year with retail advertising starting earlier than the year before. Yes, we have retail ads just like our competitors, but we believe it’s also important to remind customers of the true meaning of the holiday season,” added Ed Laukes, group vice president of Toyota division marketing at Toyota Motor North America.