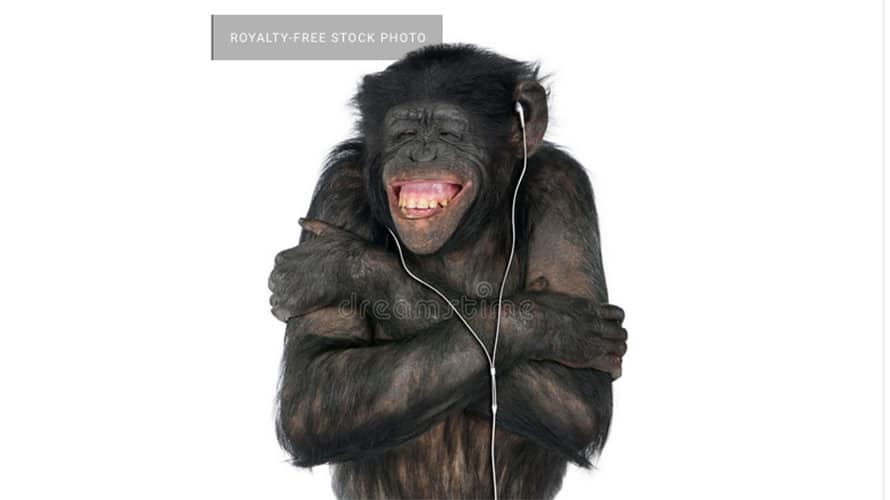 One of several 'unnatural' poses Dreamstime will be removing from its stock art collection
Dreamstime
Share
By T.L. Stanley
|
June 29, 2018
Share

It used to be a go-to gag in advertising to dress a chimpanzee in a tiny men’s suit, topped off with a fedora, and put him in a commercial. He seemed to be smiling, so he was having a good time, right?

What about that orangutan riding a bicycle? Or the ape playing musical instruments?

Those images, which once proliferated in media and marketing, have largely been dropped from mainstream advertising through a concerted, years-long effort by PETA, which says the portrayals are damaging to conservation efforts and to the primates themselves.

After convincing the world’s largest ad agencies—BBDO, DDB, Grey, Leo Burnett, McCann and Y&R among them—to stop using great apes in their ad campaigns, PETA turned its attention recently to stock photo services, asking the companies to take “unnatural” depictions of the animals out of circulation.

As a result of these talks, Alamy, Dreamstime, Pond5 and Shutterstock will be scouring their catalogs and removing inappropriate images (think chimps in makeup and tiaras), PETA announced today to Adweek. The companies, along with stock art giant Getty Images, have also rewritten their rules on accepting pictures or video of primates, limiting submissions to those taken in natural habitats or zoos.

Dreamstime CEO Serban Enache made the decision when PETA gave him the backstory on some infamous ad tropes, busting the myth that performing animals are happy.

“There are plenty of images of animals behaving normally in natural settings that humans can empathize with,” Enache said.

Adweek spoke to Julia Gallucci, a primatologist and PETA’s senior corporate liaison, about the sea change in public attitude toward animal actors, when a smile is not really a smile and what PETA’s working on next.

Adweek: What’s the criteria for an unacceptable image?
Julia Gallucci, PETA primatologist: Ones that are taken in studios or other unnatural settings in which the animal is there for the purpose of having their photo taken. This means that there will be a reduction in the number of inappropriate images of primates “smiling,” behaving unnaturally, dressed in clothing, etc., that are available for ads and other commercial uses.

There are exceptions?
The agencies will continue to offer some images of primates that may meet the criteria for unnatural or inappropriate, but they will be available for editorial, not commercial use. These types of images are important for editorial use because they have historical value, and they document the current exploitation of primates in the pet trade, in laboratory testing, in entertainment.

How will these changes impact primates?
A number of studies—including two conducted by researchers at the Lincoln Park Zoo in Chicago and Harvard University—show that the inaccurate portrayal of apes in the media hinders conservation efforts and may also increase the demand for these wild animals as pets. People see them as cute and interesting and buy them without having any real knowledge of their needs or lifespan—up to 45 years in some cases.

Primates do not fare well when kept as pets. They are usually isolated from other animals and relegated to cages. Once they outgrow infanthood, they become unruly and aggressive, and owners often get rid of them at that point. They’re shuffled from home to home or may end up at a roadside zoo. Sometimes they are euthanized. Most monkey pets suffer from depression and many self-mutilate, a sign of psychological distress.

The changes the stock-image industry is making means that we will see a reduction of exploitative images of primates in ads and other media, and it will have a positive impact on primates, on both the individual and species levels.