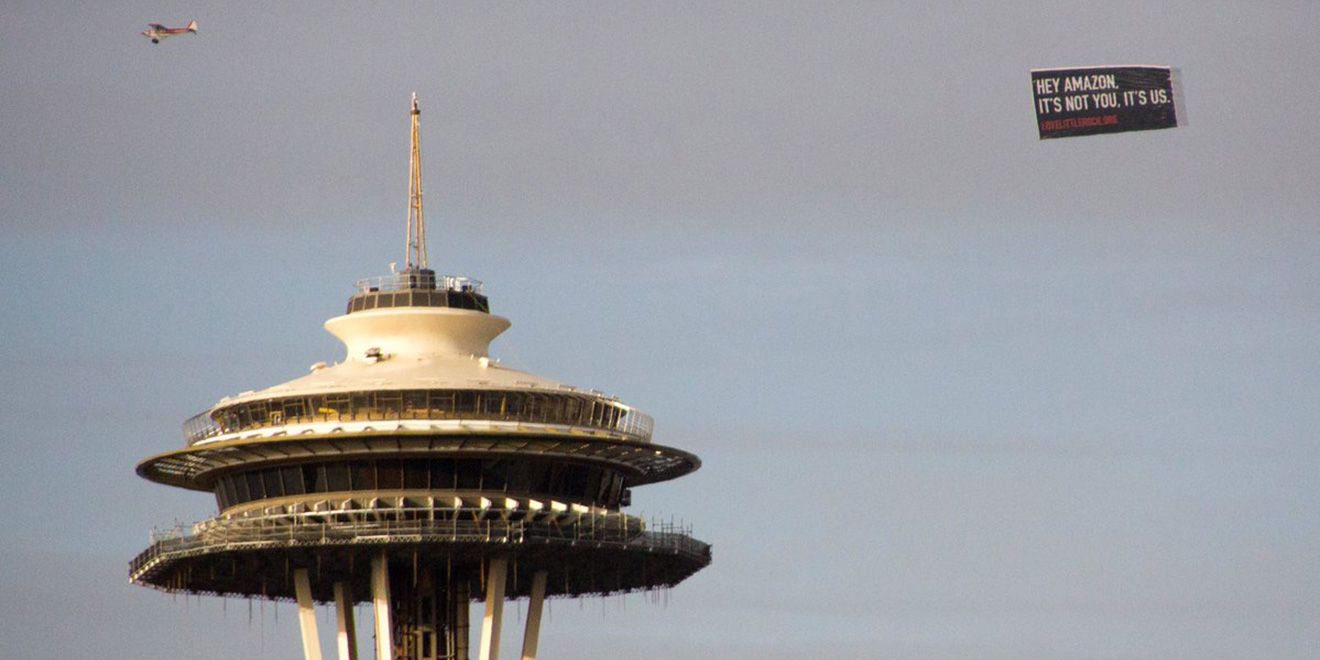 Cities around the U.S. have been falling over themselves pitching themselves to Amazon as candidates for its second headquarters. But Little Rock, Arkansas, took a unique approach. Its response to the HQ2 RFP was gracious and clever, but fundamentally different than all the others.

Thanks but no thanks, Little Rock told Amazon.

The Little Rock Regional Chamber, responsible for business development in town, placed a full-page ad in the Jeff Bezos-owned Washington Post, styled as a breakup letter, gently explaining to Amazon why it would never work out between them. “Dear Amazon, we need to talk,” the ad began. “It’s not you, it’s us.”

The campaign, by local agency Stone Ward, also included a social video as well as a stunt in Seattle—Little Rock flew an aerial banner over Amazon headquarters that read, “Hey Amazon. It’s not you, it’s us.”

It was a clever strategy. Like so many cities, Little Rock was initially interested in wooing Amazon, but quickly realized it didn’t meet many of the requirements of the RFP. Yet its playfully contrarian reply received more media attention than almost any other pitch—while introducing a new economic development positioning, themed “Love, Little Rock,” that’s already seeing results.

The idea for publicly saying no to Amazon came from one of the local business leaders who attended an early Chamber meeting on the topic. Jay Chesshir, president and CEO of the Chamber, called Millie Ward, president of Stone Ward, right after the meeting—excited about the unorthodox plan B.

“He said, ‘You know, Millie, I think this could be a really good idea.’ And I said, ‘I think it could be a brilliant idea, if we can figure out how to execute on it.’ When everyone else says yes, how do we say no?” Ward said.

The agency quickly organized a brainstorming session. It was a Sunday afternoon, nine days out from the RFP deadline. “In three hours, we probably put 200 ideas on the board that covered all the disciplines, from PR to digital to social to creative,” said Ward.

The love letter idea soon bubbled up from that meeting.

“It’s an affectionate greeting about why we feel the way we do about our city, and about all the great companies that are here, and all the companies we’d like to come here,” said Ward. “In the end, the point of this effort was to position Little Rock as a city ripe for economic development, for business growth as well as an expansion—companies or consultants that might be interested in raising the awareness of our city, raising our profile, and frankly raising our likability. That was our primary target. All the viral stuff was icing on the cake.”

The materials pointed to a new website, lovelittlerock.org. “If you hadn’t seen the letter or the video, you could go there, download a PDF and find out 15 reasons to love Little Rock, based on industry, work-life balance, arts and culture, all these various verticals,” said Lucie Pathmann, Stone Ward’s director of brand management and communications.

Getting the tone of the letter right was key.

“It would be easy to be smart-aleck with this, but what we wanted to be was smart. We wanted to be charming and endearing and understandable and empathetic,” said agency CEO and chief creative director Larry Stone. “It’s easy to just do a raspberry. We wanted to do something disruptive. Hundreds of cities were going to try to get this account. And if we weren’t going to pitch for it, what would be worthy of saying why?”

He added: “We were hoping it would go viral, and by George it did.”

“We wanted to be honest but still funny, without trying to be too over the top,” said creative director Bill Brookshire. “The tone had to be so right, because it could sound so campy if it wasn’t. It had to be big enough to get attention, but not so over the top that it reeked of being trite or cliché.”

“It’s a daunting task when you’re speaking for the city you grew up in and love,” added senior copywriter Jay Stanley. “We took our time—well, what little time we had—to try to get it right, to walk that line between fun and cute but not negative in any way. It took a while to get there, but it was a fun process, and the results have been really nice as well.”

Ward said those results include $2 million worth of free media coverage, and interest from economical development site selectors, consultants and others, who have been visiting the campaign site in recent days.

“Many great companies in America whose names you would know have been to that website, checking us out, who probably haven’t checked us out before,” Ward said. “The Chamber was very brave to run that ad. And we kept to the spirit of the letter—the tone of the love letter. That was the essence of what made this idea sing.”