An admitted beginner in Etch A Sketch artwork until a few years ago, Arlene Biran created a respectable-looking Labrador retriever on the iconic drawing toy during a recent phone interview.

“If you practice, you will get better,” she said. “And it makes you feel proud when you’ve finished.”

Biran, vice president of marketing and global business lead of activities and building toys at Etch A Sketch owner Spin Master, thinks the sense of accomplishment it gives its fans could explain the brand’s enduring appeal as it nears its sixth decade of life.

“Whether your picture is amazing or not, it’s an artistic achievement,” added Biran.

Spin Master acquired the iconic drawing toy from Ohio Art in 2016. Biran considers it a crown jewel of imagination-driven toys and a massive get for her company—also home to Air Hogs, Hatchimals and Paw Patrol.

“It’s a dream to have a legacy brand like this,” she said, noting its appearances from presidential elections to Hollywood entertainment. “Icons are few and far between in this industry.”

The toy has sold 180 million units and is on the “Century of Toys” list. But before it became a household name, Etch A Sketch was a quirky concept looking for a buyer at the 1959 Nuremberg Toy Fair.

Potential manufacturers balked at the rights fee for the “L’Écran Magique,” or Magic Screen, invented by French electrician Andre Cassagnes. After reconsidering, Ohio Art agreed to the asking price of $25,000, a hefty sum (today, that equates to about $220,ooo), according to the National Toy Hall of Fame. 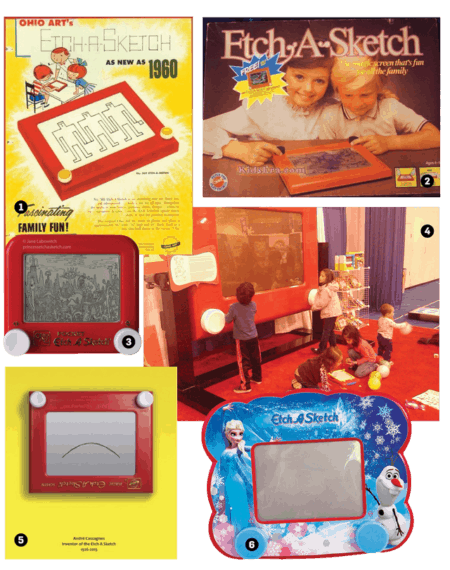 (1) Early advertising around Etch A Sketch, including TV spots, made it an instant hit in 1960. (2) Ohio Arts changed the name from Magic Screen to Etch A Sketch before the toy’s U.S. debut, but marketing has often leaned into its “magic” qualities. (3) Artists like Jane Labowitch (aka Princess Etch) create painstaking art pieces on reconfigured toys. (4) Current owner Spin Master prefers experiential activations and digital outreach to traditional media to tout Etch A Sketch. (5) The brand said a fond, fitting farewell to its inventor in 2013. (6) Anniversary special editions and tie-ins with Frozen, The Simpsons and other entertainment media haven’t reached sales of the original product.

Execs at the Bryan, Ohio-based firm renamed the toy and quickly put it on television. It was a no-brainer since the Etch A Sketch design resembled a TV set, purposely, and it launched as the medium started to gain a mainstream foothold in the U.S. An animated commercial helped make it a must-have item for the country’s youngsters and, as Biran put it, laid the foundation for modern toy advertising.

In the following decades, artists began experimenting with the toy store staple, drilling holes in its base and draining its aluminum powder. That allowed for permanent artwork (by removing the erasing function), and paved the way for elaborate portraits (Barack Obama, Michael Jackson, Run DMC) and homages to well-known works from Dali, Lichtenstein and Van Gogh.

The core qualities that propelled the toy haven’t changed much, though Toronto-based Spin Master has debuted joystick and stylus versions, along with a free app. The flagship product is still the best-seller. And, Etch A Sketch remains unapologetically low-tech (no Wi-Fi connection, with neither USB port nor batteries). 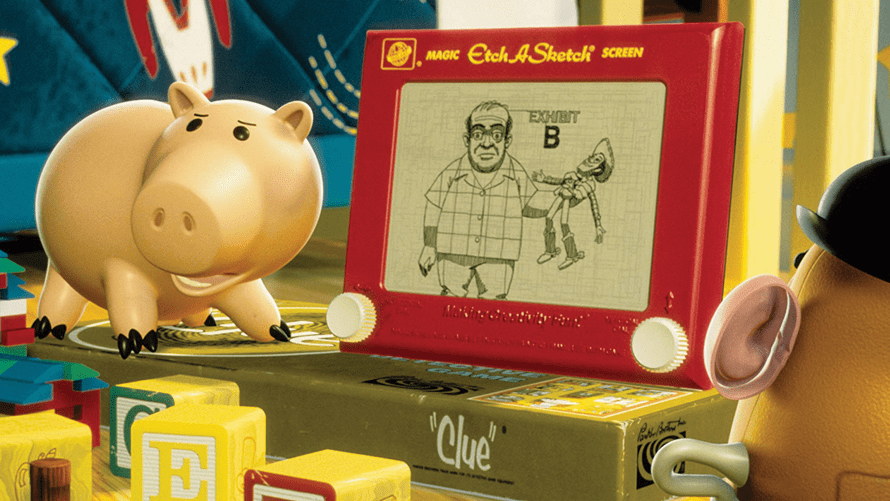 Filmmakers, TV showrunners and politicos are just as enamored with Etch A Sketch as the world’s children have been for nearly six decades, giving the classic drawing toy considerable face time in entertainment and media. Execs at Spin Master rarely turn down an Etch A Sketch cameo, and they don’t charge appearance fees (awareness is already stellar, but it’s a great brand builder, they say). Some of its more famous roles include shout-outs in: the Toy Story movie franchise where Woody says the beloved character Etch has “the fastest knobs in the West,” Elf when Buddy is a wizard at intricate Etch A Sketch communication (then-owner Ohio Art went “full tilt” with production of the toy to meet a surge in consumer demand), Pretty Little Liars where the toy held an important clue about one of the show’s central mysteries in Season 6 and even the 2012 presidential campaign when Etch A Sketch became synonymous with political flip-flopping during the race for the White House.
Pixar

Biran, who is spearheading the brand’s 60th anniversary celebration in 2020, plans partner collaborations, limited-time product, special discounts and experiential marketing, among other consumer outreach. The yearlong program with a heavy retail presence will target the next generation.

Chris Byrne, an industry expert known as The Toy Guy, said Etch A Sketch continues as a perennial favorite because it taps into kids’ established play patterns.

“It’s brought to life by the individual child, so it’s a tool for self-expression,” he said. “And it’s fun to make something and then wipe it away, which is classic build-and-destroy behavior.”

The modest cost doesn’t hurt, he elaborated, and it sets itself apart in pleasantly analog ways, away from the world of Nintendo Switch, Xbox and PlayStation.

“It’s the one screen that parents aren’t trying to limit,” Byrne said. 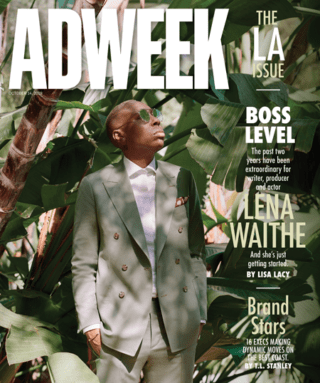 Click for more from this issue
This story first appeared in the Oct. 14, 2019, issue of Adweek magazine. Click here to subscribe.
@TLStanleyLA tlstanley8@yahoo.com T.L. Stanley is a senior editor at Adweek, where she specializes in consumer trends, cannabis marketing, meat alternatives, pop culture, challenger brands and creativity.