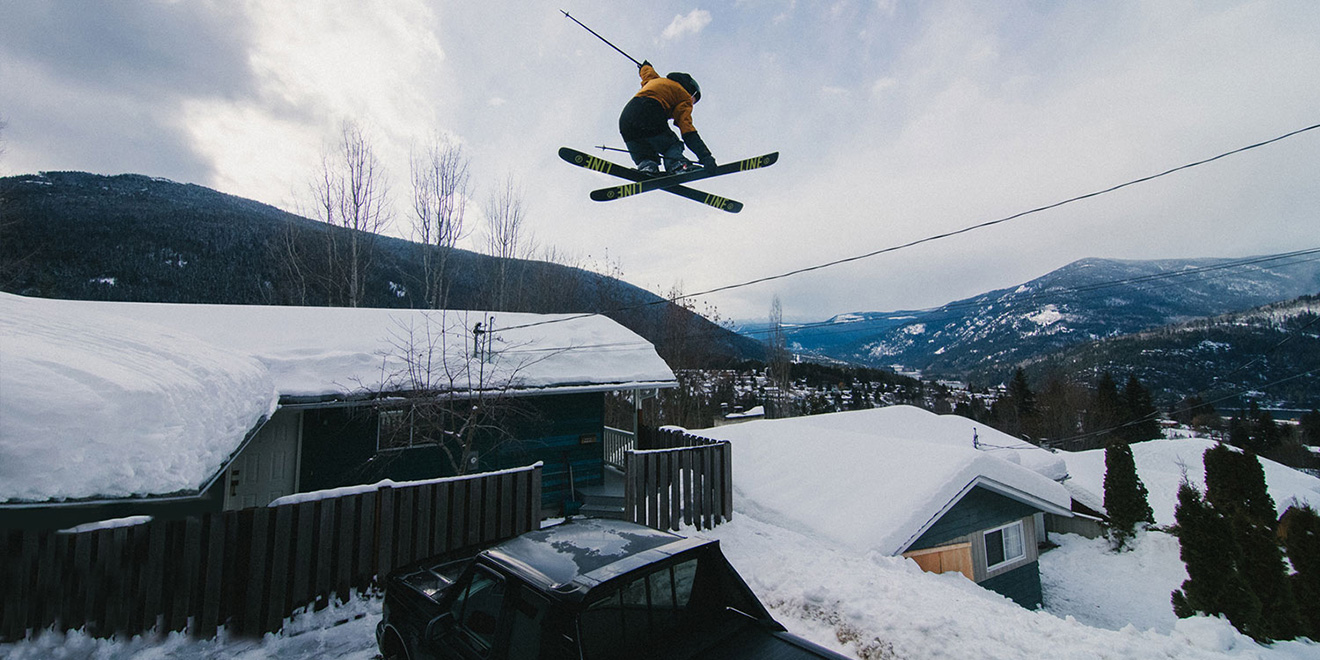 Remember sitting in the backseat of the car, headed who knows where, while your parents drifted in and out of tension-ridden conversation?

If you lived in the pre-tablet world (and your Gameboy was busted), maybe you looked out the window. Maybe you saw yourself out beyond the scope of your seatbelt, doing something incredibly cool.

This is the moment that informs the short film “Imagination,” which won Best Film in the Ski & Snowboard category at Banff Film Festival. The fruit of a collaboration between The North Face and Sherpas Cinema, it was shot on location in British Columbia and features professional freeskier Tom Wallisch.

The work combines a relatable moment with incredible stunts, which we can appreciate even if our imaginary escapes were less risqué. Wallisch’s take on the sport is like parkour; he flips over trucks, slides across bannisters and kicks up sparks over naked concrete, his movements balletic. When we watch him, we’re there with that kid, feeling the vicarious chill slice our cheekbones.

Add to that a gorgeous alpine landscape and a track that’s both nostalgic and fresh (The Avalanches’ “Because I’m Me”), and the result is work as liberating to watch as the name implies.

The video continues where previous Sherpas Cinema urban ski films, “All.I.Can” and “Into the Mind’s Night” (shown below), left off. It was shot in the small mountain towns of Nelson and Rossland over three weeks in March.

JP Auclair, a professional freeskier who passed away in an avalanche in 2014, developed the original concept. If you feel a pinch of melancholy, it’s not just your lonely search for lost time; “Imagination” is also an emotional tribute to Auclair from friends and collaborators.

“This video project was one of most challenging yet rewarding projects I’ve ever been a part of,” Wallisch says. “With so many moving pieces and unique shots and locations, it was an undertaking to complete. I swear I could feel JP guiding us on the video as we shot it.”

The film is being shared under the hashtags #Imagination and #WeLoveYouJP. And in recognition of Auclair’s passion for connecting people to the mountains, Alpine Initiatives is helping complete the Spearhead Huts Project, an effort to build the first ever West Coast hut-to-hut experience in Whistler, B.C.

Below, senior brand content manager Landon Bassett of The North Face answers a few questions about “Imagination” for AdFreak.

AdFreak: Tell us about the film’s backstory.
Landon Bassett: “Imagination” is inspired by a creative concept first developed by JP Auclair, a professional freeskier who passed away in an avalanche in 2014.

In 2011, Sherpas Cinema released “All.I.Can”’s Kootenay street segment featuring JP Auclair, and “Into the Mind”’s night segment with both Auclair and Wallisch. “Imagination” was brought together to create the next chapter in urban skiing. Both pieces were shot on location in Nelson, British Columbia, and with the help of the local community, this piece was able to bring JP’s concept to life.

We felt that as a brand, we had the vision and resources to bring this segment together in a meaningful way to continue both JP’s legacy and build on the long-running creative partnership with Sherpas Cinema. The concept immediately brought us back to childhood and being stuck in the car when all you wanted to do was be out skiing or sledding or exploring the neighborhood.

We want to be a platform to help keep that daydream spirit alive as we age, and Tom’s skiing was a great way to set the bar high.

How involved was Tom Wallisch in bringing the story to life?
Wallisch has been a member of our athlete team since 2010. We love working with Tom; he brings such a new perspective to skiing and makes it truly an art form. Tom and JP worked together on street segments in the past, one of which inspired “Imagination,” and Tom was really able to step in to help bring the highest-level skiing to JP’s original idea.

Who is “Imagination” talking to?
We hope “Imagination” speaks to anyone who finds themselves daydreaming of what could be. This piece is special because it allows us to be a little kid again, with a mind that wanders and imagines new ways to approach things you may see every day.

Any fun behind-the-scenes stories you can tell?
It’s a huge effort to ski through a real town with a moving car in the shot—add to that jumping off roofs and over driveways while keeping the visual flow of the edit, and you have some very precise choreography to implement. This is all complicated by these moves being hard to pull off, so some of the scenes required a bunch of takes to nail.

Tell us what The North Face is focusing on right now, and what it hopes to accomplish with this work.
Going into 2018, the brand is focusing on the evolution of exploration, which for us means finding exploration beyond mountain environments and into cities, towns and beyond. This piece helps us rethink the idea of the traditional “explorer” and see the outdoors from a new perspective.

This short film dropped in collaboration with The North Face 2018 U.S. Freeski Uniform unveil [on Oct. 30]. For the second straight Olympic Winter Games, The North Face will provide the U.S. Freeski Team with technically advanced and stylish performance apparel to help the team compete at the highest level possible. “Imagination” brings freeskiing and urban skiing to the forefront, which is something we are very excited about going into the new year.

What were the results?
We are really happy with the perception of “Imagination.” The video has received over 1.5 million views the first few days online and received Best Film in the Ski & Snowboard category at Banff Film Festival last week.

Why did it resonate so strongly?
It was a big undertaking to take the original concept and recreate it to produce a piece that will encourage the next generation to rethink possibilities. Also, the music was a huge bonus. “Because I’m Me,” performed by the Avalanches, fit with the feel perfectly. We love that track.