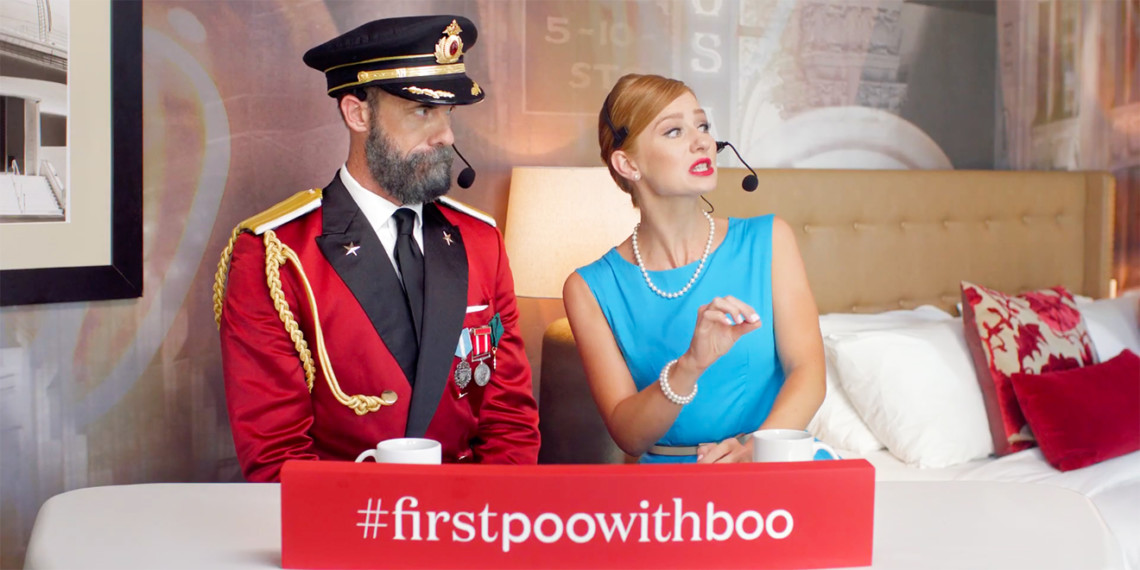 Captain Obvious and Poo-Pourri's Lady Bethany offer some expert commentary on pooping in hotels. - Credit by Hotels.com and Poo-Pourri

Though they might seem like odd bedfellows at first, Lady Bethany and Captain Obvious are actually a match made in mascot heaven, arriving on the scene together just ahead of the holiday travel season.

Accommodations are his game (via Hotels.com), and obfuscation is hers (via Poo-Pourri). As it turns out, these two spokescharacters are well-suited to tackle a common problem using their trademark style of punny humor.

The issue: How do you poop discretely in the close confines of a hotel room while your special someone is on the other side of the door? Added stressor: It’s your first trip as a couple.

Hence #FirstPooWithBoo, a six-week all-digital campaign from a potent meeting of the minds behind both brands. They teamed up at the suggestion of Hotels.com’s longtime agency CPB, which gave the brand icons new jobs as sports-style broadcasters, complete with headset mics and official-looking desk (actually a giant toilet tank).

The long-form hero ad, as well as shorter cut-downs, sees Bethany Woodruff and Captain Obvious giving play-by-play commentary of awkward cohabitation scenarios. For instance, a guy tries to escape to the hotel lobby to do his business (only to find it’s out of order) and a gal runs water (using the “sink silencer”) as a crappy cover up. There’s also some well placed slow motion and replay action.

“This is an issue that every person faces at some point in their lives, and we all need to drop the shame,” says Suzy Batiz, founder and CEO of Poo-Pourri.

Using the bathroom spritz with a loyal cult following could solve those “relationship-killer woes,” the brand says in spots that will run on YouTube, Facebook, Instagram and sites like The Onion, Comedy Central and People.

The co-branded alliance has research on its side. Nearly one-quarter of people reported that going No. 2 is “the most anxiety-inducing part” of their maiden voyage with their new partners, according to a Hotels.com study, while 73% said they will go to great lengths to avoid using the hotel bathroom when their significant other just steps away.

“The relationship is new and you’re just not ready for them to smell you that way yet,” says Quinn Katherman, CPB’s creative director and a 2019 Adweek Creative 100 honoree. “But Hotels.com gets it, and Poo-Pourri made the perfect partners to help us tackle an issue that everyone can relate to on a gut level.”

The new campaign includes a limited run of co-branded product (Original Citrus, the best-selling scent), with 500 doled out free to the first 500 consumers on the website. Others can buy the pack for $10. But if you’re stuck with no odor-eliminating spray, the partners are working on some “Poo How-Tos” with “detailed illustrations for moves and techniques” for making the best of a stinky situation.