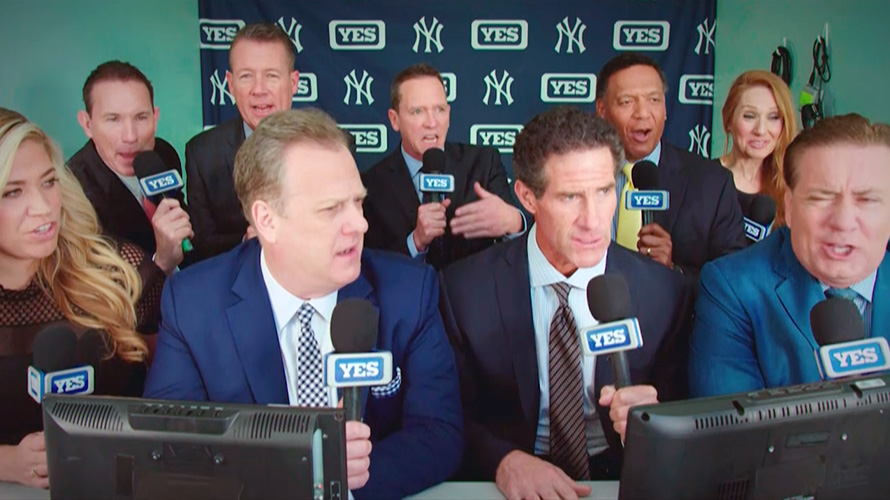 It’s a new season for charmingly goofy baseball promos. And following last week’s new batch of spots for the Seattle Mariners, now we get the YES Network’s 2018 promo for its New York Yankees coverage.

Most network sports promos are downward-facing dogs, but YES had a hit last year with its yoga-themed spot, which humorously suggested that the network’s broadcast team is “strong at our core.”

This year’s theme? Along with strength, the YES broadcast team can also boast volume—as seen in a new spot where they introduce a nine-person broadcast booth. Because what could go wrong with all those baseball minds offering their thoughts at the same time?

A season this big deserves a broadcast team this big. #9PersonBooth pic.twitter.com/KxRPVO1j33

“Everything about this coming Yankees season is BIG,” YES said in a statement. “BIG players. BIG bats. And from a fan perspective, BIG expectations. Feeling the anticipation of ‘something BIG,’ YES has responded with the first-ever ‘9-Person Booth,’ the BIGGEST broadcast booth ever! Why? Because a season this BIG deserves a broadcast team this BIG!”

Sometimes Michael Kay by himself is a little much, but we’ll concede this is an entertaining approach—self-deprecating and over-the-top in a good way.

The campaign will run on linear TV (a :60, along with various :30s and :10s) and digital. The online content will include a mockumentary and an extended “making of” spot. YES also plans to produce a 10-episode Instagram series, along with memes and GIFs.