Get on the 'Pride Train' and #SashayAway 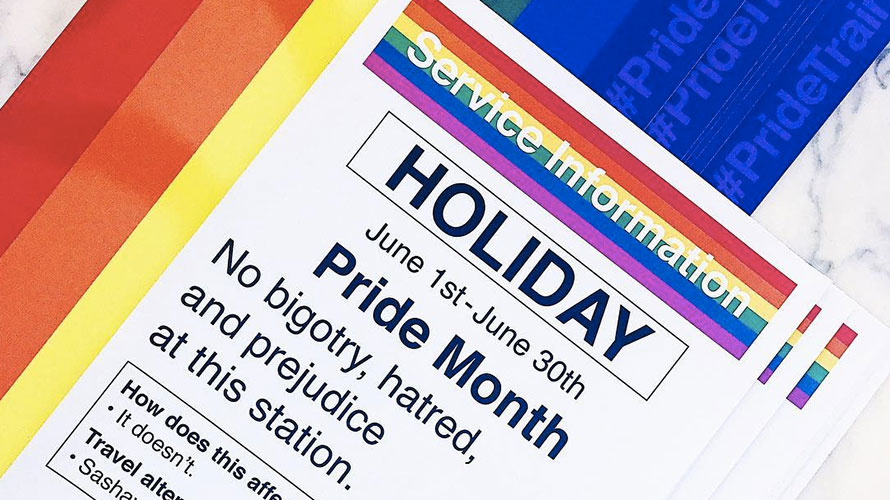 The world’s most famous New Yorker has declined to recognize Pride Month this year. But thanks to a few enterprising advertising creatives, the city’s subway system is more fabulous than ever.

On the last day of May, President Trump issued proclamations naming June as everything from African-American Music Appreciation Month to National Homeowners Month. But he has yet to mention that June has also long served as LGBTQ Pride Month, despite the U.S. Navy issuing its own statement on the same day celebrating LGBTQ service members.

“One thing that struck a chord with us was that Donald Trump is probably never going to mention Pride Month,” said Thomas Shim, a global creative director at Y&R and longtime veteran of the New York agency scene. “It’s been hitting us hard [amid] all this news about hate crimes.”

So Shim, along with freelance art directors Ezequiel Consoli and Jack Welles, came up with a way to celebrate Pride in the city’s most public space—the subway system. (Y&R itself was not involved.)

A few days ago, the trio decided, via a series of brainstorming text messages, to create signs resembling official MTA announcements. But unlike most service-change posters, these remind riders that there’s “No bigotry, hatred, and prejudice at this station” during Pride.

The trio copied the MTA’s font and messaging style while using the official colors of the respective subway lines to form the rainbow flag. They also included the MTA’s most common headers, “How does this affect my trip?” and “Travel alternatives,” writing “It doesn’t” under the first and offering several alternatives for the second, including the famous shrug emoticon and instructions for riders to simply “Sashay away.”

They even created a series of rainbow stickers to go directly below the American flags adorning the exteriors of many subway cars.

“The MTA is the darkest place in New York City, and we wanted to figure out how to shine a light in such a dark place and get people’s attention without leaving a bad taste in their mouth,” Shim tells us, noting that the group and some friends have put up at least 200 signs so far.

He described the overarching strategy as “Don’t get caught,” adding, “So far we haven’t received any official backlash from the MTA … but they’ve definitely seen us, and I’m pretty sure they see the stickers.”

Shim said dozens of people have been taking the signs down to keep as souvenirs, so the team plans to make more and move beyond the two existing designs in order to take the project beyond its own self-imposed June 30 deadline.

“It’s not just about the Pride Train; it’s about the month and what it means to be a New Yorker,” Shim says. “I think we get a little complacent because we do live in a ‘blue bubble,’ and it’s good to see social media attention from outside New York City as other states and countries are talking about our project.”

Despite some predictable trolling, Shim said responses have been overwhelmingly positive. “In a small way it brightens [viewers’] days regardless of where they are,” he added, “and that’s been making us really happy.”

LGBTQ communities around the world have long celebrated June as Pride Month in honor of the Stonewall riots, which occurred in June 1969 in downtown Manhattan. Bill Clinton was the first American president to declare June as “Gay and Lesbian Pride Month” in 2000, and Barack Obama issued similar statements during each year of his presidency, though his predecessor George W. Bush did not acknowledge the holiday.