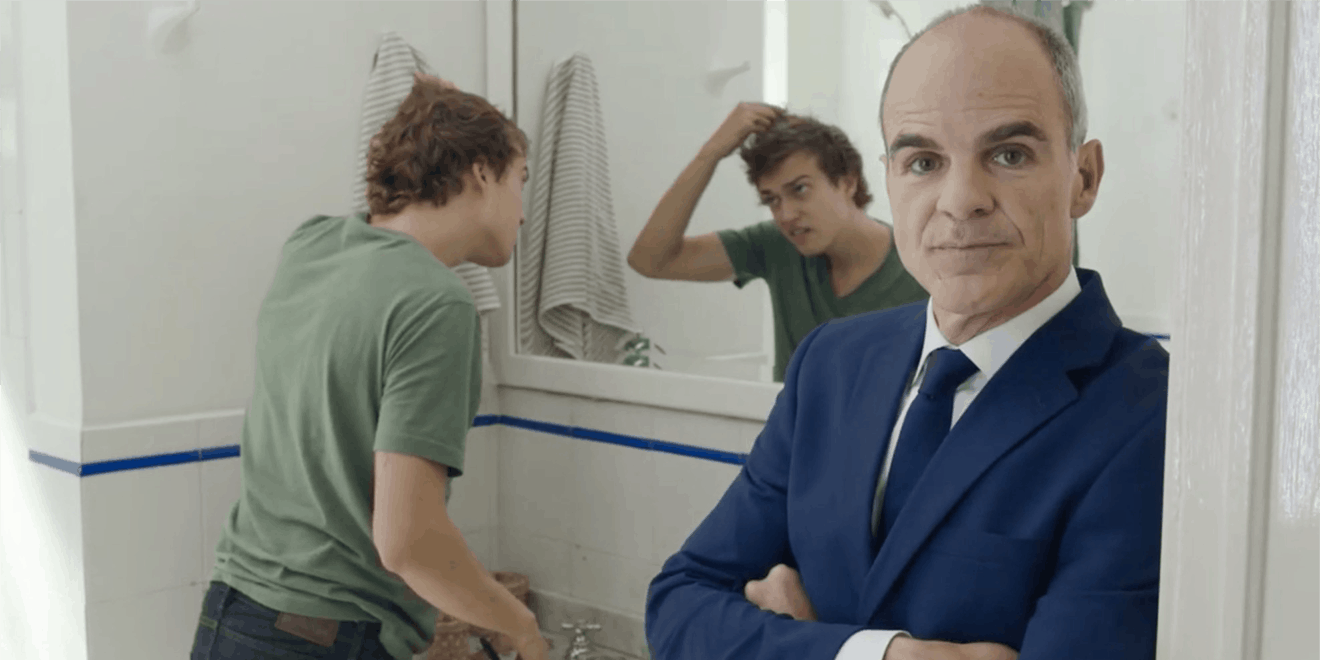 Michael Kelly is not impressed with how you treat your hair. Supercuts

When one thinks of humor, Michael Kelly, the actor who has masterfully navigated the highly complex Doug Stamper in House of Cards, doesn’t necessarily leap to mind. Yet, when watching a new series of ads for Supercuts, it’s easy to see why the accomplished star of the Netflix series was the perfect casting for a series of new ads for Supercuts.

Kelly not only nails the lines with a pleasing deadpan delivery, but he also has one of the more essential attributes for the creative concept from TBWA\Chiat\Day Los Angeles: He’s bald.

The anchor of the three ads is “Don’t Take Your Hair for Granted,” a one-minute gem that has Kelly criticizing people for the things that they do to disrespect their hair—like leaving it unattended, wearing it “up” and the cardinal sin, cutting it themselves.

A second ad, “Bad Hair Day,” continues the humorous theme and the brand doles out a bit of self-depreciation when Kelly tells a fellow subway passenger: “You know what happens when I walk into a Supercuts? They just assume I’m looking for the karate studio next door.”

The final ad of the trio, connected to the brand’s partnership with Major League Baseball, has Kelly waxing poetic about what he would do if he had a full set of hair, including finding a pool, diving in and doing “that little hair flip thing” after coming out of the water.

For his part, Kelly, who has been approached about a comedy but has yet to act in one, saw the potential of the creative after his manager, Brian Liebman, explained the concept.

“[Brian] called me and said, ‘How do you feel about monetizing your baldness?'” he said. “I told him that I wasn’t doing a Rogaine commercial, and he sent me the copy, and it was laugh-out-loud funny. Everyone agreed that this was [the right] artistic decision because no one ever gets to see [me] funny.”

While there was some debate over who should be cast, James Townsend, the CMO of Regis (Supercuts’ parent company), noted that it came down to the cognitive dissonance of having Kelly in the role.

“I love the unexpected nature of [the fact that Kelly] is always an intense kind of governmental, shadowy employee,” he said. “But I think it’s a great move to take somebody who is known, can play the same character and then just pivot to humor.”

Though Kelly’s approach seems effortless in the ads, he acknowledged that comedy is “without a doubt, harder.”

“[In comedy], you don’t just worry about being real and in the moment,” said Kelly. “The timing is different, and it was tough, but I’ve always enjoyed a challenge. I had so much fun with [director] David Shane and the Chiat\Day team, and I’m grateful to be able to do something different like this.”

As far as the brand is concerned, Townsend, who was a global partner for 72andSunny, feels that this approach will help Supercuts separate itself from the other budget haircare salons, especially for its male clientele.

“To a certain degree, [haircuts] are commoditized,” he said. “But it’s still a very personal and emotional experience. There was a huge opportunity to double down on this audience because we uncovered that, more than they often admit, men are more concerned about their hair and they want to feel as though that they’re in a good pair of hands [when getting a haircut].”

“This campaign allowed our agency to do what we love most: identify the soul and voice of a brand that differentiates its business within its category,” said Renato Fernandez, CCO of TBWA\Chiat\Day Los Angeles. “What we found in Supercuts was a playful, fun tonality that enabled us to bring humor to the concept of not taking your hair, or the value that Supercuts offers, for granted, while still having a bit of fun connecting with the next generation of men who may face this reality one day.”

Both Kelly and Townsend agree that having a bald spokesman is meant to be a wink—playful and a bit of disruption in the otherwise predictable world of the category’s marketing.

“Someone is going to get mad at these commercials for whatever reason,” said Kelly. “There’s nothing you can do about it, but I think more people will be surprised and happy, and that’s all you can ever hope for whenever you do anything.”

“I’m at peace with the risk [of the campaign],” added Townsend. “This is designed to make people smile, and it’s impossible to do anything disruptive—with a small ‘d’—without people talking about it. But we’ll take the press.”