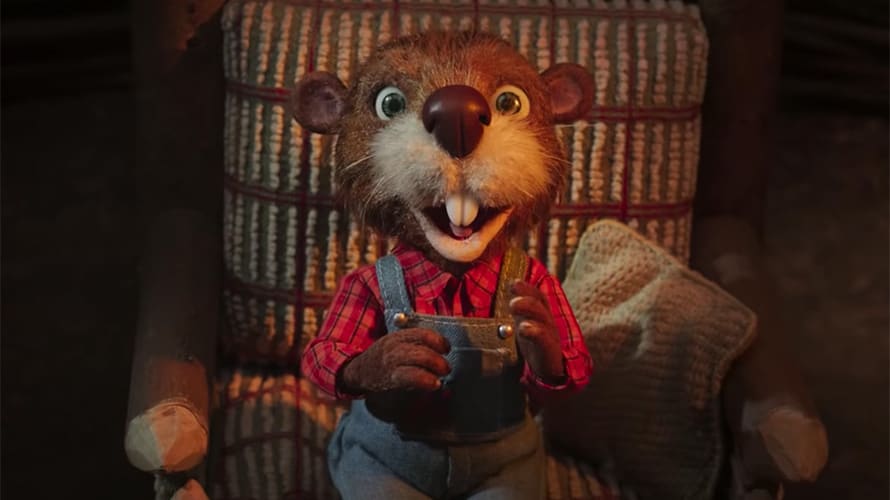 Our anthropomorphized hero—his big, flat tail jutting out from the seat of his pants—loves to fish from a rowboat, and dreams of landing “the big one.” Alas, his quest takes him perilously near a massive hydroelectric dam.

“Don’t ignore that warning sign, your life could be on the line,” croons Canadian folk and bluegrass singer Ken Whiteley on the campfire-song soundtrack he helped compose.

Hey, listen to the lyrics and steer clear of those turbines because the fur could really fly! Of course, Dammy dodges the whammy by the skin of his teeth.

“Initially, we had this idea to tell a classic underdog tale about a little boy,” Meghan Kraemer, associate creative director at the Hive, which developed the campaign, tells Adweek. “At the end of the spot, in old age, he’d finally get his moment, only to be surprised by the perilous waters of the dam. It stemmed from learning that our target—in some cases, people who have lived around OPG dams for their entire lives—may have a false sense of confidence, thinking they can predict when the dam will open or have some sense of the danger before it’s too late.”

The creative team planned a live-action spot, and at one point envisioned a singing beaver as the star.

Ultimately, they chose to “tell a more insightful, meatier story” using stop-motion animation with a narrative music track, rather than going for quirky laughs or dark humor like Melbourne Metro’s classic “Dumb Ways to Die.”

“We thought about (fire safety icon) Smokey Bear as a reference for delivering an important message in a very approachable way,” Kraemer says.

Along with Smokey, the Hive drew inspiration from “The Fantastic Mr. Fox,” Portlandia’s “Rats” and Jim Henson’s “Emmett Otter’s Jugband.”

All in all, the ad’s low-key vibe, greatly enhanced by Whiteley’s performance, feels quintessentially Canadian, and makes a simple point—STEER CLEAR OF DAMS!—without going overboard.