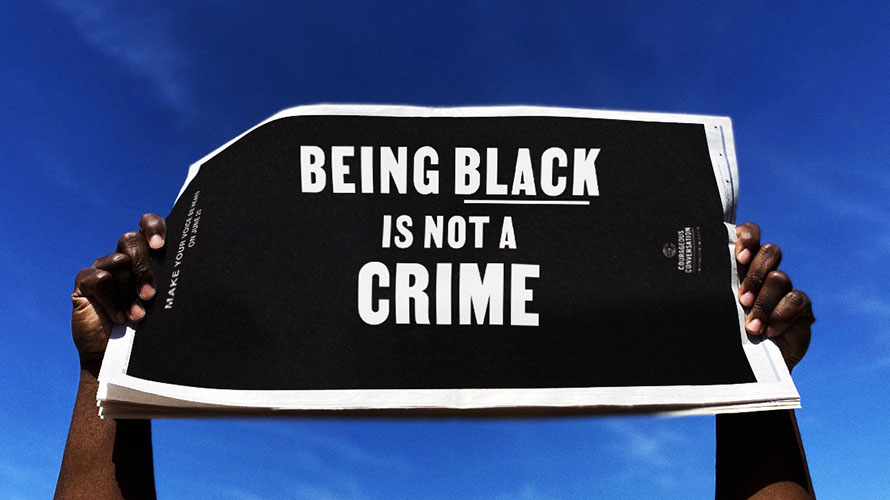 The ad doubles as a protest sign ahead of President Trump's June 20 rally. - Credit by Courageous Conversation Global Foundation

The ad, which reads “Being black is not a crime” in stark white letters on a black background, is intended to “inform and equip people in Tulsa with a poster that can be used to make their voices heard,” said Glenn Singleton, president of CCGF.

Trump’s rally was originally planned for today, Juneteenth—a holiday commemorating the day 155 years ago that the last slaves in Texas were informed of their freedom, two years after the Emancipation Proclamation was signed. After national outcry, the rally was rescheduled for a day later.

“With the date, location and timing of the rally, it felt necessary for us to make a statement on the ground in Tulsa,” said Rony Castor, associate creative director at GS&P. “We should all hold ourselves accountable. If you can use your voice, you should do it. This is just our way of using ours.”

By Thursday afternoon, rally attendees had already started lining up in preparation for the event, and the city later enacted a curfew to curtail interaction between protesters and Trump supporters. Today, Trump warned protesters that Tulsa would be a “much different scene” than in other cities.

Any protesters, anarchists, agitators, looters or lowlifes who are going to Oklahoma please understand, you will not be treated like you have been in New York, Seattle, or Minneapolis. It will be a much different scene!

In Tulsa, Black people are twice as likely to be arrested as white people, according to CCGF. The organization also noted the city’s particularly violent racial history as part of the motivation to contribute to the conversation on the ground—in 1921, white Oklahomans torched the downtown business district dubbed “Black Wall Street,” burning nearly 40 square blocks and killing an estimated 300 people.

Given the city’s history and the revolutionary moment the United States has been experiencing since protests erupted following the police killing of George Floyd in Minneapolis on May 25, it’s “not an option to sit out while those in power continue to trample on our democracy and civil rights,” said Anthony O’Neill, associate creative director at GS&P.

CCGF is known for developing a protocol for engaging in and deepening interracial dialogue. Over the past several months, it’s also been working with Goodby Silverstein & Partners to create ads addressing racial injustice and police brutality in the United States.

Earlier this month, GS&P emblazoned the same message appearing in today’s newspaper ad, “Being black is not a crime,” across its office building in San Francisco. In February, the agency created the “Not a Gun” campaign for CCGF to highlight racial bias in policing and followed it up with another spot, “Not a Crime,” in May.

Courageous Conversation Global Foundation
Castor and O’Neill, the talent at GS&P behind those initiatives, were both honored in Adweek’s Creative 100 this year.
@klundster kathryn.lundstrom@adweek.com Kathryn Lundstrom is Adweek's breaking news reporter based in Austin.