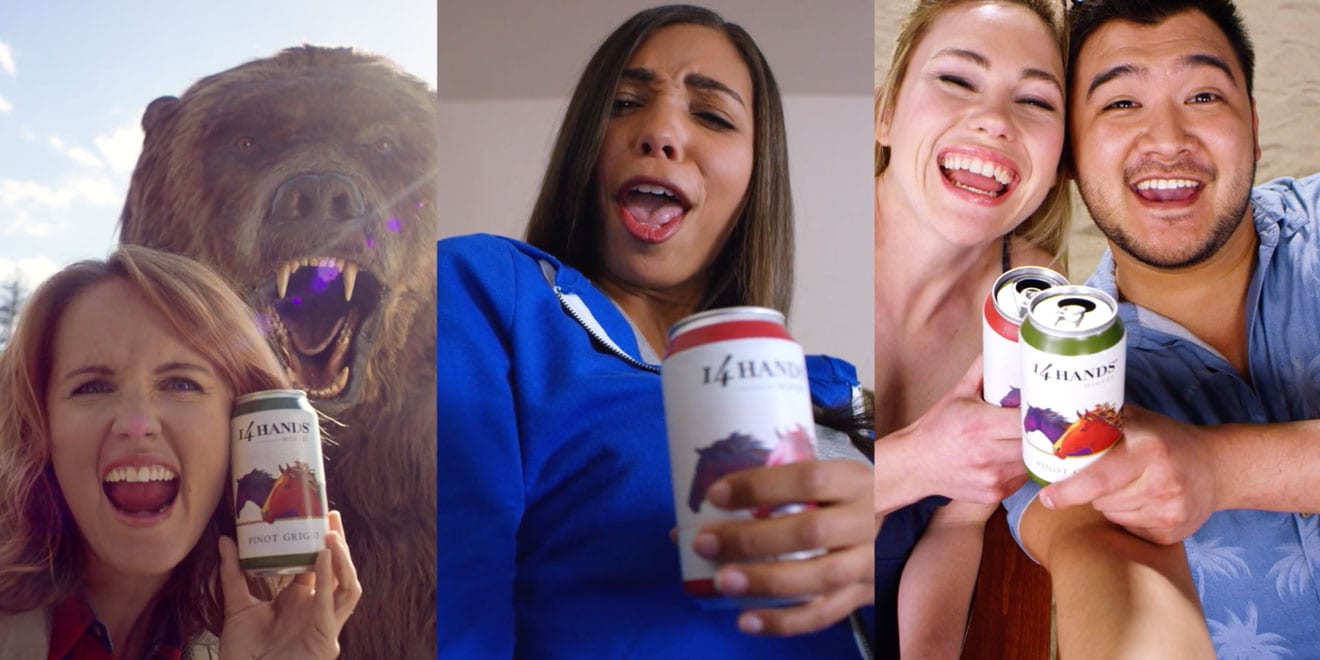 Seattle agency Copacino+Fujikado created a series of videos that have some fun with well-known beer ads. - Credit by Copaci + Fujikado

Ah, wine in a can: repulsive to some, but a godsend for others. Either way, Washington state winery 14 Hands thinks its latest product can at least stand up to beer.

That’s why it tapped Seattle agency Copacino+Fujikado to create a series of videos that have some fun with well-known beer ads, like Bud Light’s classic “Wazzup.” The hope is that it will convince viewers that wine can be enjoyed in even the most casual of settings (as if people already haven’t figured that out).

In the campaign’s anthem spot, the word “wineski”—a twist on “brewski”—replaces Bud Light’s iconic vernacular. The spot is also treated to a 2019 update, as it features a group of women friends watching the game while their significant others chime in. The friends also communicate via Facetime instead of landline, another change to the original spot.

A second ad spoofs Corona’s “Life’s a Beach” effort, while a third—which riffs on Busch’s nature-themed ads—shows a woman clad in a red-and-blue flannel as she attempts to explain the wonders of canned wine to a grizzly bear.

The spots will run nationally on digital channels including YouTube and Pandora. Influencer elements will also support the campaign, which is running under the tagline “Grab a Wineski.”

Rebekah Gunderson, senior marketing manager for 14 Hands, said the strategy behind the campaign is simple: you can now enjoy wine in all types of new occasions, particularly those where you were previously limited to beer—including the ads themselves.

“There’s a natural connection between the fun of beer and the genre of advertising it has created, and we’re jumping into both head first,” she said.

Mike Hayward, executive creative director at Copacino+Fujikado, said that the agency wanted to create something that would help the brand stand out in what is becoming an increasingly crowded space.

“After a deep dive, it became clear that most brands are leaning into a very ‘curated aesthetic,’ something you’d see with #LiveFolk. While that’s beautiful and right for those brands, we wanted to make sure 14 Hands Wine in a can stuck out in the rapidly growing canned wine market,” he said. “That, with the recent ‘beer wars’ going on made this a great moment to bring wine into a space so often dominated by beer.”