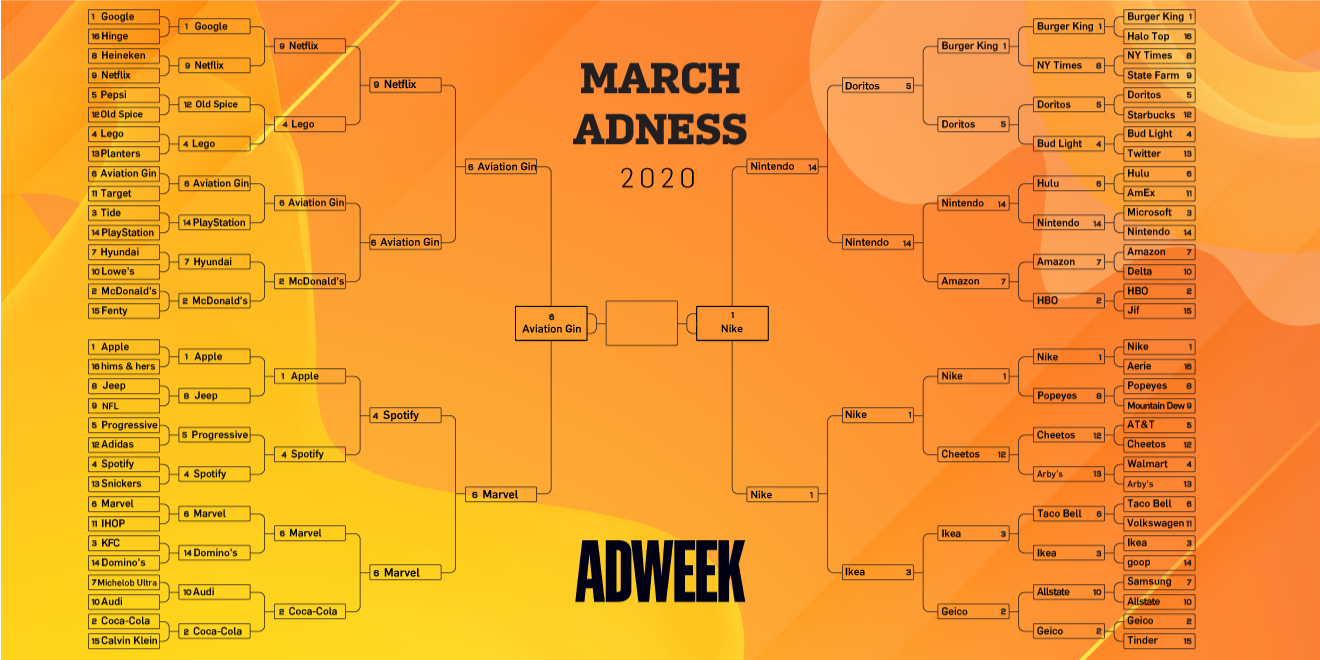 It’s time. The moment has arrived to determine, through a rigorously scientific process of social media favoritism, the best advertiser in the game today.

Adweek’s March Adness brand bracket pits 64 of the most innovative and attention-grabbing marketers against each other in a no-holds-barred battle for social supremacy. Only one will make it through the championship and claim a year of coveted bragging rights (honestly there’s nothing else on the line here).

We’ll be asking our social media audiences to vote often over the coming weeks, so be sure you’re following @Adweek on Twitter and on Instagram. Each matchup will be a limited-time poll open to any voters, so be sure to keep an eye out for each one.

If you work at or represent a brand, you might want to start planning your March Adness strategy right now. Getting your fans voting can be the difference between glorious victory and ignominious defeat.

This is a tournament where underdogs can thrive, as illustrated by last year’s victor: 16th-seed Aviation Gin. Thanks to the distillery’s social media savvy and the support of its celebrity owner, Ryan Reynolds, the brand soared past all other competitors to take the top spot in the 2019 March Adness bracket.

In this year’s bracket, Aviation Gin starts the tournament 10 seeds higher at a No. 6. Why not No. 1? Because as any fan of 1980s movie sequels knows, you have to give your scrappy hero room to continue growing. (If Daniel-san hadn’t gone to Okinawa to get his butt kicked and start smashing ice blocks, would we even have Peter Cetera’s “Glory of Love”? I rest my case.)

Speaking of rankings, you might be wondering how they’re determined. Oh, it’s incredibly complicated. There are…algorithms? OK, full transparency: the Adweek news team basically just throws a bunch of names in a spreadsheet and moves them around until we stop yelling at each other.

Here’s a look at the schedule for this year’s matchups:

Let the distraction commence! Good luck to all the brands, their superfans and especially the marketing underdogs who seize their moment to knock some corporate juggernauts down a peg or two.

UPDATE: Round 1 is closed! Check out the final tallies in tweets below, and be sure you’re following Adweek on Twitter and Instagram so you can take part in Round 2 on Monday and Tuesday.

Our #MarchAdness bracket begins NOW! Who should advance to the next round? No. 1 seed @Google ???? is a heavy hitter, but can scrappy underdog @hinge steal your heart ????? Vote:

Next up: @Heineken brought ???? to the party, but @netflix has no chill. Will the beer flow or the video stream ????️ play on? Vote below. #MarchAdness

Whose ads hit harder? ???? @Pepsi faces off against @OldSpice in our #MarchAdness bracket. Vote now:

Can Planters' resurrected @mrpeanut ????topple the towering @LEGO_Group ????? Select your top contender for the #MarchAdness title:

Last year’s victor, @VancityReynolds' @AviationGin ????takes on @Target. Who will hit the mark ???? in #MarchAdness this year? Vote:

Is this a @tide ad, or will gamers rally behind @PlayStation? Select your ???? brand. #MarchAdness

Next, @Hyundai drives into the arena ???? to face the throughly-equipped @Lowes ⚒️. Which one has what it takes to win #MarchAdness? Vote:

Are you lovin’ @McDonalds ????, or is @fentybeauty???? more your style? Make your choice to see the winner advance in #MarchAdness.

Will @Jeep drive on ???? to the next round or will @nfl make the touchdown ????? Choose your #MarchAdness contender:

Can @Progressive progress➡️, or will @adidas ????dash ahead in #MarchAdness? The choice is yours.

It's music vs. chocolate as @Spotify ????and @SNICKERS ????face off. Whose ads sustain you best during social distancing? #MarchAdness

Can pancakes ???? prevail against an army of superheroes ????‍♀️????‍♂️ in this competition between @Marvel and @IHOP? Select your #MarchAdness contender:

Things are about to go into overdrive as @MichelobULTRA ???? takes on @AudiOfficial ???? in this #MarchAdness face-off. Who should advance?

This battle just got alliterative, with @CocaCola taking on @CalvinKlein. Does soda or style best suit you? #MarchAdness

First up: Will No. 1 seed @BurgerKing retain its throne, or will @HaloTopCreamery's halo ???? become the new crown????? Make your choice. #MarchAdness

Chips or caffeine—which guilty pleasure can't you live without? Decide whether @doritos or @starbucks will advance to the next round in #MarchAdness:

Can all @budlight's horses ???? and all of its knights ⚔️ triumph over the armies of @Twitter ???? on the #MarchAdness battlefield? You decide:

Binge watchers ???? of @hulu rise up against big spenders ????at @AmericanExpress, but who will cash out?

Can @Microsoft's PC empire ???? claim victory over console ???? gamers once and for all, or will @NintendoAmerica switch things up? Choose your contender in #MarchAdness.

You might be home shopping ????on @amazon, but do you secretly dream of flying away on a @Delta ✈️vacation? Which brand brings the most marketing power to #MarchAdness?

.@HBO brings its titanic library of TV and movies ????️ to the arena, but @Jif peanut butter ???? recently entered the giffing game. Which advertiser will you choose to advance to the next round of #MarchAdness?

First up for today's voting, No. 1 seed @Nike races ???? into the arena with an army of athletes, but @Aerie's diversity and body positivity ???? are poised to put up a worthy fight. Vote for your top advertiser in our #MarchAdness bracket:

Yesterday @PopeyesChicken ???? was busy currying favor by giving out its Netflix password (https://t.co/2DfZB8afg1). Can @MountainDew beat it to peak ⛰️ popularity? You decide. #MarchAdness

Make the call: Can @ATT dial in ???? a successful win, or will @ChesterCheetah claim a cheddar-flavored ???? crown? #MarchAdness

Does @Arbys have enough meats ???? to overwhelm retail giant @Walmart????? You decide who advances. #MarchMadness

Can @tacobell's marketing for its latest tacotastic creation ???????????? top the recent campaigns for advertising icon @VW? Cast your vote. #MarchAdness

Are @Samsung's campaigns something to call ???? home about, or does the voice of @Allstate's @DennisHaysbert convey ultimate reliability? You decide. #MarchAdness

Will you switch to @GEICO ????or swipe right on @Tinder ???? today? Choose the brand that kindles your flame. #MarchAdness

Update: Round 2 is closed! Check out the final tallies in tweets below, and be sure you’re following Adweek on Twitter and Instagram so you can take part in Round 3 on Tuesday and Wednesday.

No. 1 seed @google easily maintained its dominance ???? over @hinge in Round 1, but @netflix ????️managed to win by a larger margin over opponent @heineken. Can the streamer beat the big tech titan in the time of #QuarantineAndChill? Vote below. #MarchAdness

In a stunning upset, @OldSpice managed to secure victory ????over @PepsiCo in Round 1. But does the brand stand a chance against the towering @LEGO_Group ????, which made short work of @mrpeanut? (RIP again, Baby Nut ????.) Which will you choose? #MarchAdness

Last year's champion @AviationGin ???? trounced @Target in the first round, but this year @PlayStation ???? managed the more shocking upset against @tide. Does @VancityReynolds' brand have enough spirit to advance again? Make your choice! #MarchAdness

.@Hyundai drove circles ???? around @Lowes in Round 1, but @McDonalds ???? had no trouble against @fentybeauty. Can Hyundai drive through the fast-food giant? It all depends on what you crave in an advertiser. #MarchAdness

The mighty @Apple ????took a bite out of @wearehims and @wearehers, but can it stand up to @jeep ????, which managed to score a touchdown against @NFL ? Who do you think is the superior advertiser? #MarchAdness

.@ItsFlo and @Progressive managed a close victory against @adidas, but can it *insure* a defense against @Spotify's ???? beats after the music platform defeated @snickers? You decide! #MarchAdness

The @marvel universe hulked out ????in a stark defeat over @ihop last round, but how will its heroes fare against @dominos ????after the pizza chain sliced into Round 1 against @kfc? Vote! #MarchAdness

.@AudiOfficial knocked @MichelobULTRA *auda* the running in Round 1. But can Audi drive away with a Round 2 victory against the iconic @CocaCola, which made short work of @CalvinKlein? The choice is yours! #MarchAdness

First up: In a decisive victory, @BurgerKing ???? retained its crown against @HaloTopCreamery—but can it hold up against the @nytimes after it scooped @StateFarm? Choose your contender. #MarchAdness

You might think that @doritos and @budlight are best enjoyed together—but today these brands must meet in battle! Will you snack or sip in this #MarchAdness showdown?

(Note: Thanks to incredible participation in our Instagram voting, Nintendo managed to beat out Hulu as we headed into the Sweet 16.)

It's no shock that @hulu dominated against @AmericanExpress while people are #remoteworking, but who could have foreseen that @NintendoAmerica would switch it up and defeat the mighty @microsoft? Will video games ????️ or TV streaming ???? emerge victorious? You decide. #MarchAdness

.@amazon delivered ???? in Round 1, scoring an easy victory over @Delta. But can it bring more to you than entertainment powerhouse @HBO ????️ ? Vote! #MarchAdness

(Note: Thanks to incredible participation in our Instagram voting, Nike managed to beat out Popeyes as we headed into the Sweet 16.)

Does popular underdog @PopeyesChicken ???? stand a chance against @nike's heart-racing ???? athletic campaigns? Just do it—vote for your top brand. #MarchAdness