Want to Guzzle Some Ranch With Your Fellow Hidden Valley Superfans? These Ads Say Yes

'You either love it, or you really love it' 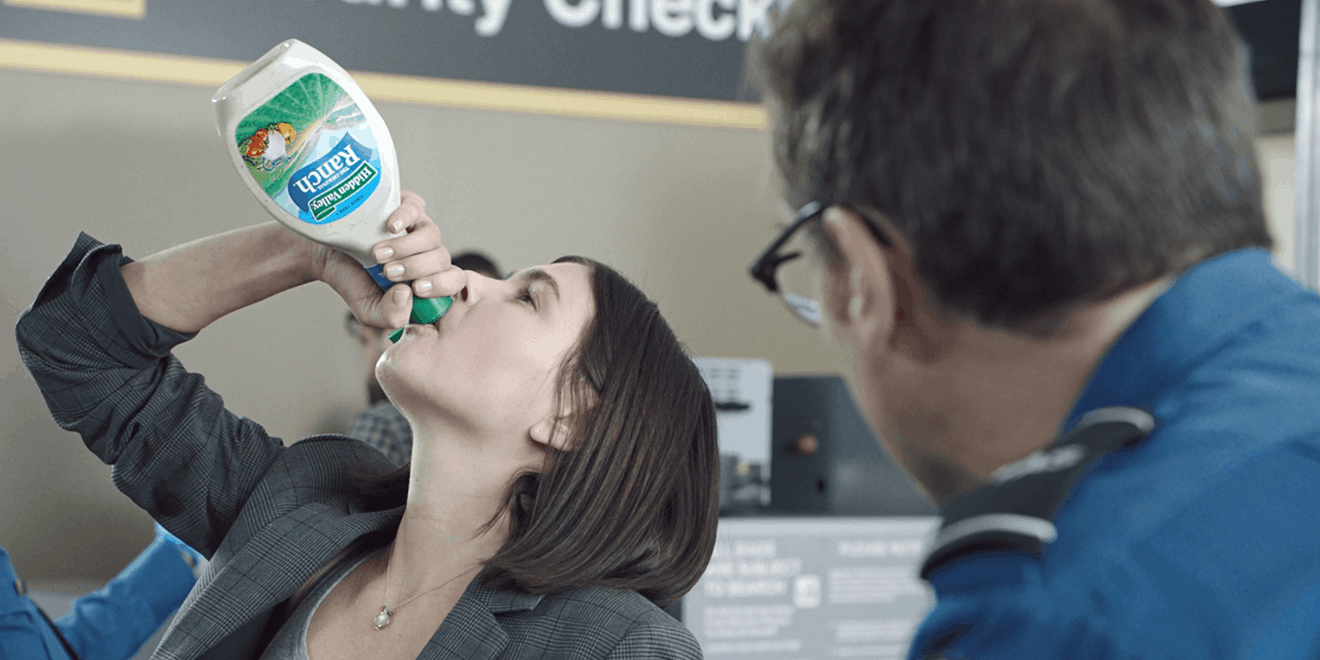 Don't try this at home. Or at the airport. Anywhere, really.
Hidden Valley
Share
By Doug Zanger
|
January 24, 2019
Share

There are some odd things that make their way through airport security, especially of the culinary variety. Depending on the city, you may see hipster donuts (Portland), hipster BBQ (Austin) or just … hipsters (folk flying between Portland and Austin).

Then there are the genuinely bizarre items like fully cooked rotisserie chickens, which make the idea of trying to sneak a bottle of Hidden Valley Ranch dressing through the x-ray machine a plausible, albeit weird scenario.

It’s also how a new 15-second ad for the brand, created by mcgarrybowen, plays out. We’ve all seen the airport security gag (some work, some don’t), and from the TSA agent’s first line, you have a pretty good idea where this is going. The bottle is more than 3 ounces. You then hope and pray that the payoff is … YES, she drank the bottle of ranch dressing! Even though you knew what was going to happen, it was still oddly satisfying, right?

It’s one of four ads in a series directed by Scrubs alumnus Zach Braff for the Clorox-owned brand with the tagline: “You either love it, or you really love it.”

It also serves as a piece of brand integration and a crucial part of the storyline for tonight’s episode of ABC’s drama A Million Little Things, as ad exec Rome Howard (played by Romany Malco) pitches the exact same concept for the same brand with the same tagline—to robust applause, of course, because that’s how Hollywood pitches work.

The three other 15-second spots in the series hold their own as well, even though, again, you pretty much know where things are headed.

A party foul of spilled dip on a shirt turns deliciously awkward. A woman at another party goes B.Y.O.D. (Bring Your Own Dip), by zesting up a dull dip with Hidden Valley Ranch. Two friends watching a game sweat out some hot wings, but ranch dressing, and a straw, make it all better.

“The best ideas aren’t created out of thin air, they are crafted out of a nugget of truth. That is certainly the case here,” said mcgarrybowen Chicago chief creative officer Kurt Fries. “This work rips back the curtain on the love that people have for [Hidden Valley Ranch] in a way that is bold, provocative and, I think, damn funny. “

In each ad, it’s also clear that people genuinely love what they’re eating and/or drinking.

"It’s been a few years since I directed spots, but diving right into a hilarious campaign for HVR was great."
Zach Braff, director

The ads were produced by RSA Films and directed by Braff. This also marks the Scrubs star and Garden State director’s return to making commercials (he directed a 2007 Dunkin Donuts ad with Naomi Campbell).

“It’s been a few years since I directed spots, but diving right into a hilarious campaign for HVR was great,” he said. “The whole process was great, from casting to production. We all worked hard, but we had a lot of laughs doing it. I’m looking forward to what comes next.”

Fifteen-second ads can be hit or miss. And familiar concepts, in the wrong hands, can fall flat. But despite the familiarity of these ads, they’re breezy, enjoyable advertising comfort food … and there’s nothing wrong with that sometimes.