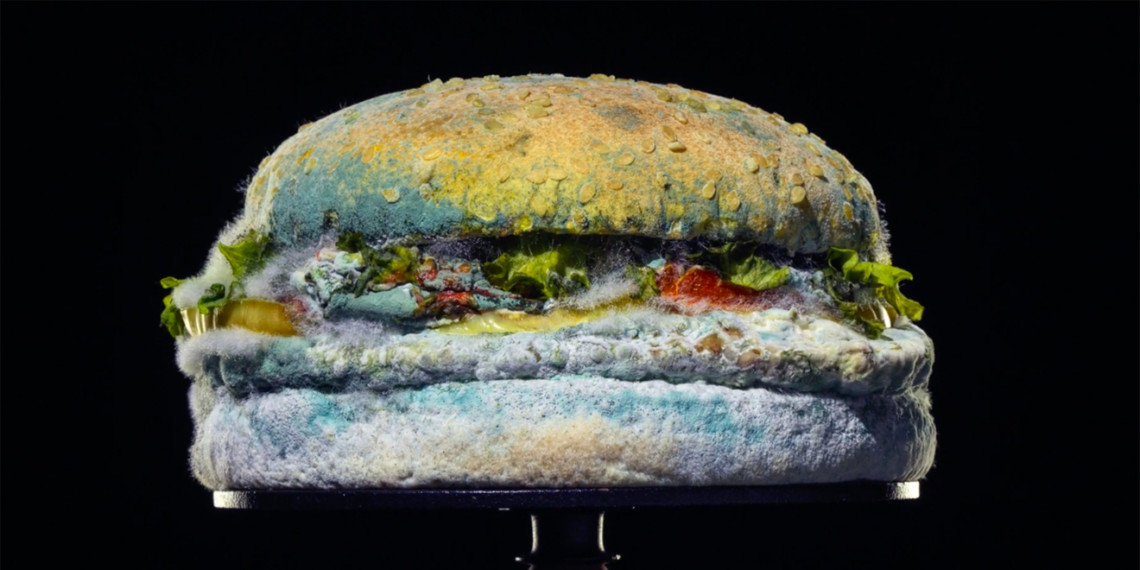 Burger King highlights "the beauty of no artificial preservatives" in its Moldy Whopper campaign. Burger King

One moment, thin as a dagger’s edge, lies between the two—and we are living in it at this very instant.

Today, Burger King unveiled a global ad campaign aimed at highlighting its commitment to dropping all artificial preservatives. Such campaigns, while laudable, come and go somewhat often without generating much more than passing interest.

But this one is truly bizarre and tests just how far Burger King can take its audiences down the bold marketing route before losing the path entirely.

The Moldy Whopper campaign, created through a partnership between three agencies, features intriguingly high-resolution photography and video of a Whopper being consumed not by humans, but rather by the voracious maw of time itself. In other words, we get to see a Whopper rotting.

Each ad shows a Whopper whose ingredients are being engulfed in mold, alongside a date stamp letting you know how long the burger has been exposed to the elements (typically about a month). The tagline describes the images as “the beauty of no artificial preservatives.”

Three agencies worked on the campaign: Ingo, a Swedish shop owned in a partnership between Ogilvy and Grey, Ogilvy-owned David and Publicis.

“At Burger King, we believe that real food tastes better,” said Fernando Machado, CMO for Burger King parent company Restaurant Brands International. “That’s why we are working hard to remove preservatives, colors and flavors from artificial sources from the food we serve in all countries around the world.” 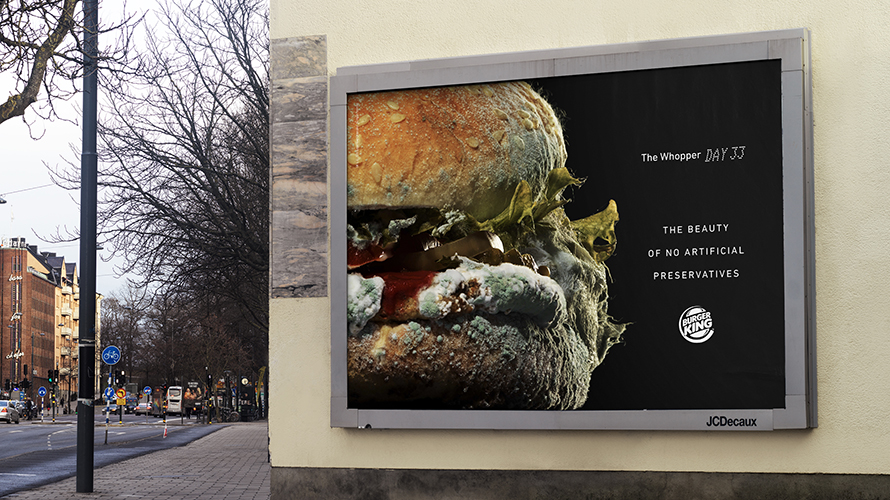 The campaign originated in Scandinavia, where the Whopper has already been stripped of such preservatives, which have been linked to a variety of negative effects, especially in children.

Fans of fast food oddities will also recognize the Moldy Whopper as a dig at “the Last McDonald’s Cheeseburger in Iceland,” which has been on display—and conspicuously unaffected by the ravages of decomposition—since the Golden Arches vanished from the island nation in 2009. 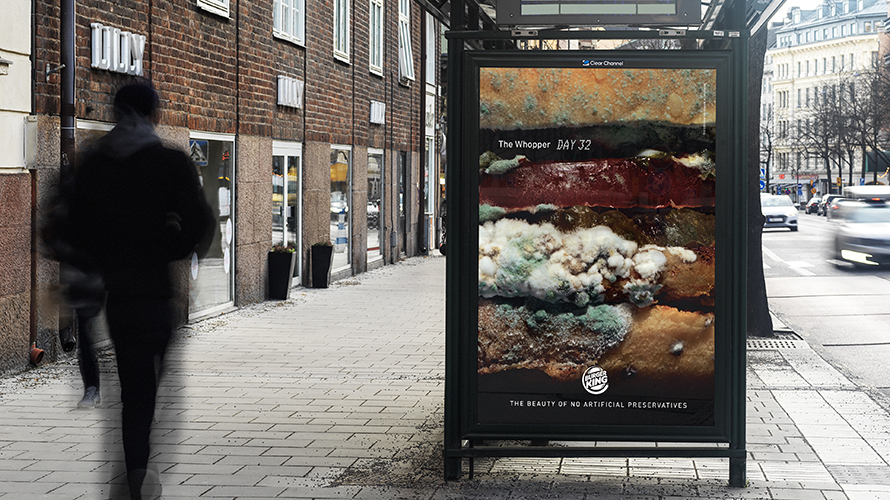 While agency network David is well known for its eyebrow-raising work on Burger King, Ingo is also a proven provocateur for the brand. Last year, Ingo created an entire menu for Burger King in Sweden that mocked McDonald’s loss of the Big Mac trademark in an EU legal battle.

"I never thought I would become a specialist in mold, but that was required to make this one happen.""
—Björn Ståhl, ecd, Ingo

The mold campaign might be challenging to common sense, but it was also a difficult one to accomplish in terms of craft and required months to achieve.

“We are very proud of crafting this idea,” said Björn Ståhl, executive creative director for Ingo. “Mold grows in a very inconsistent way. We had to work for several months, with different samples, to be able to showcase the beauty of something which is usually considered undesirable. I never thought I would become a specialist in mold, but that was required to make this one happen.” 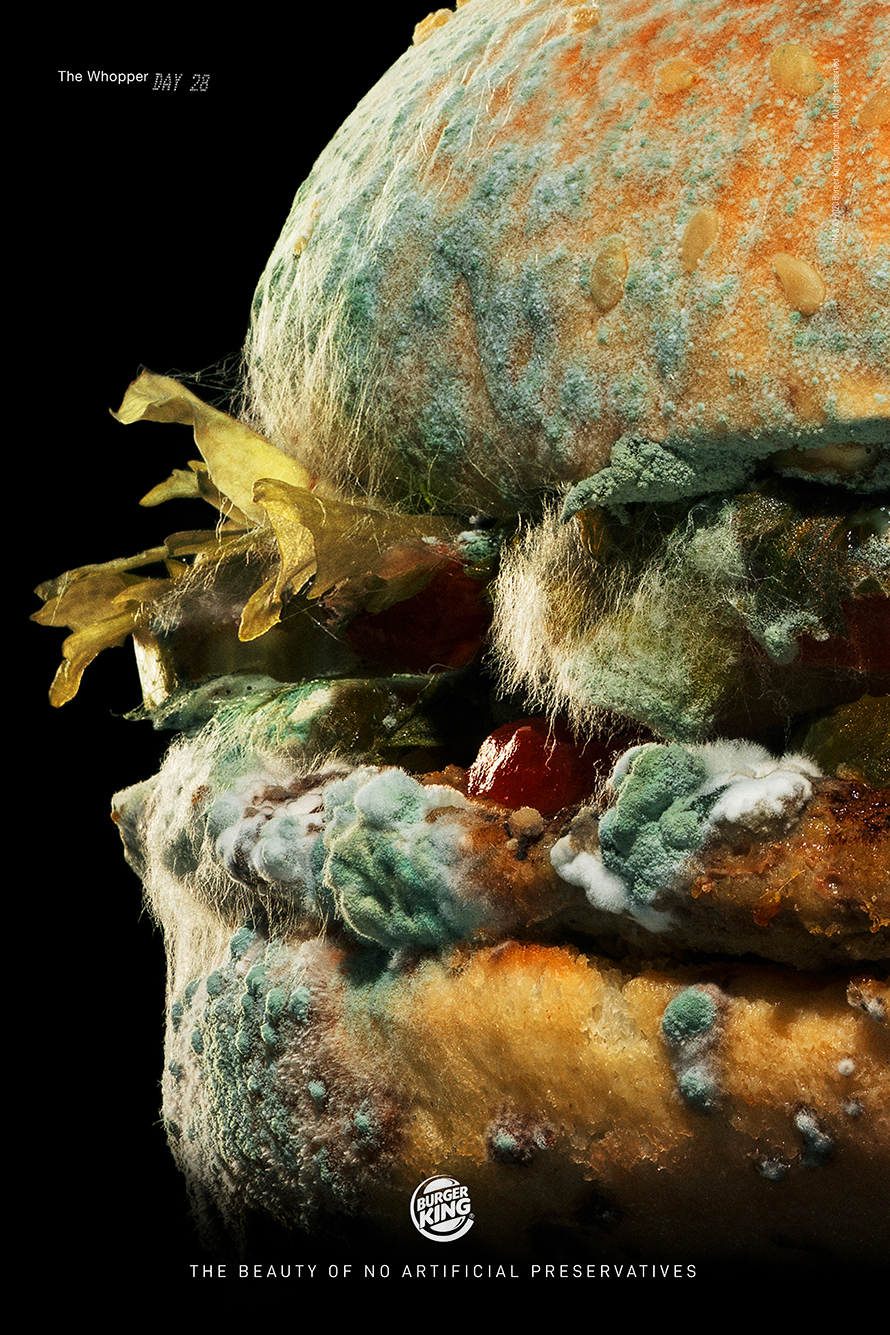 While Burger King’s campaign is certainly the most dramatic in addressing preservatives and artificial additives, it’s not the first to take a creative approach. In 2016, Kraft Macaroni & Cheese revealed it had actually already removed artificial preservatives and dyes like yellow 5 and 6, but consumers hadn’t noticed a thing.

On the opposite end of the subtlety spectrum lies the Moldy Whopper. So how will it go over? In the short term, the likely answer is: not great.

Counterintuitive or generally head-scratching advertising tends to generate quite a bit of short-term negative publicity, usually thanks to morning talk shows and late-night monologues riffing on the obvious “what were they thinking?!” weirdness.

And some within advertising will call the work “awards bait,” knowing that juries at Cannes Lions and other awards festivals tend to glom onto concepts that challenge every seemingly obvious but unwritten rule of advertising, such as “Don’t make your food look like it will literally kill people.” 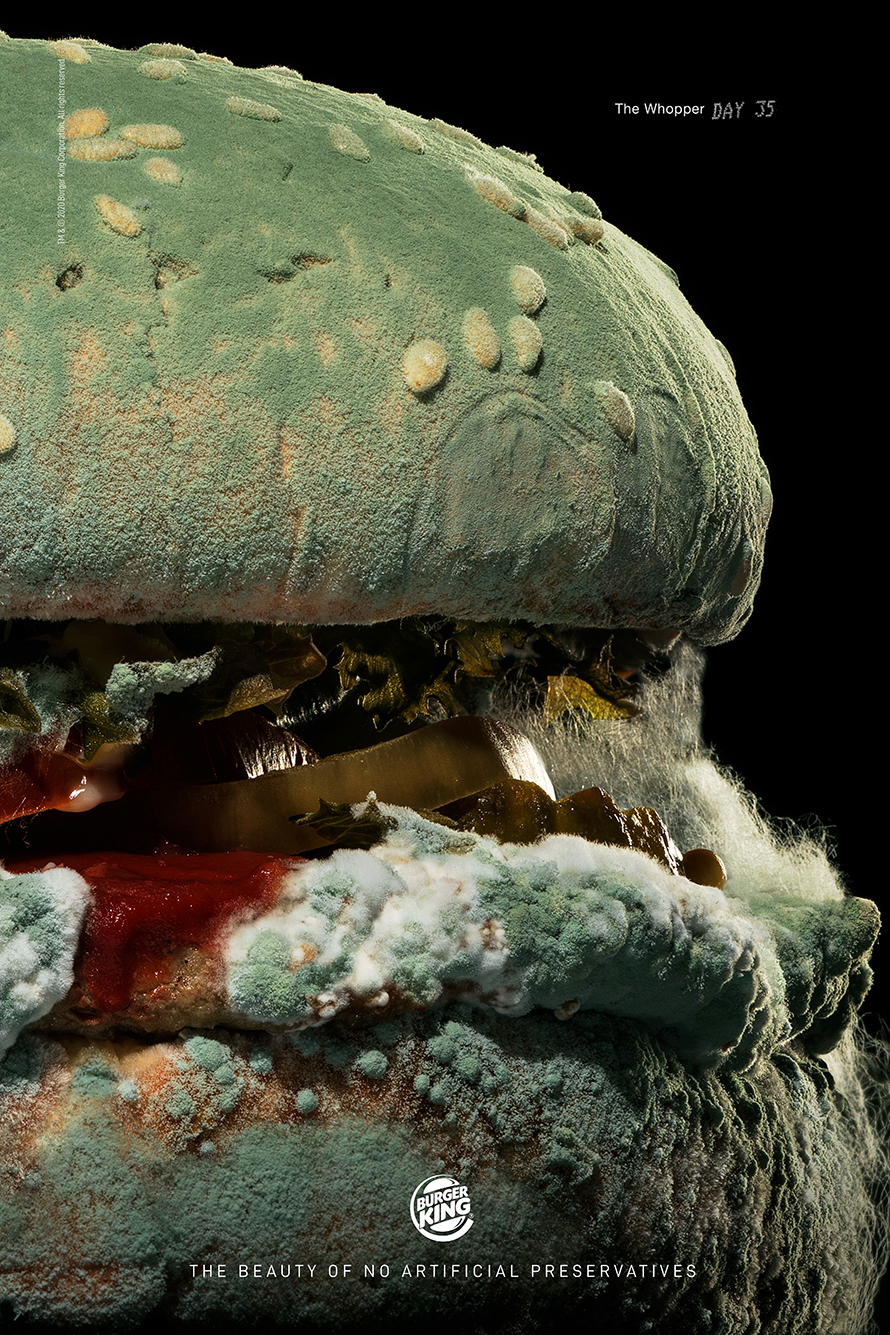 But in the process of sparking debate and consternation, the campaign is also likely to resonate across the industry and encourage other brands to take similar (albeit likely less… putrified) moves, knowing that the ideas will be easier to sell when something so confoundingly off the wall has already been sold to a major global corporation. 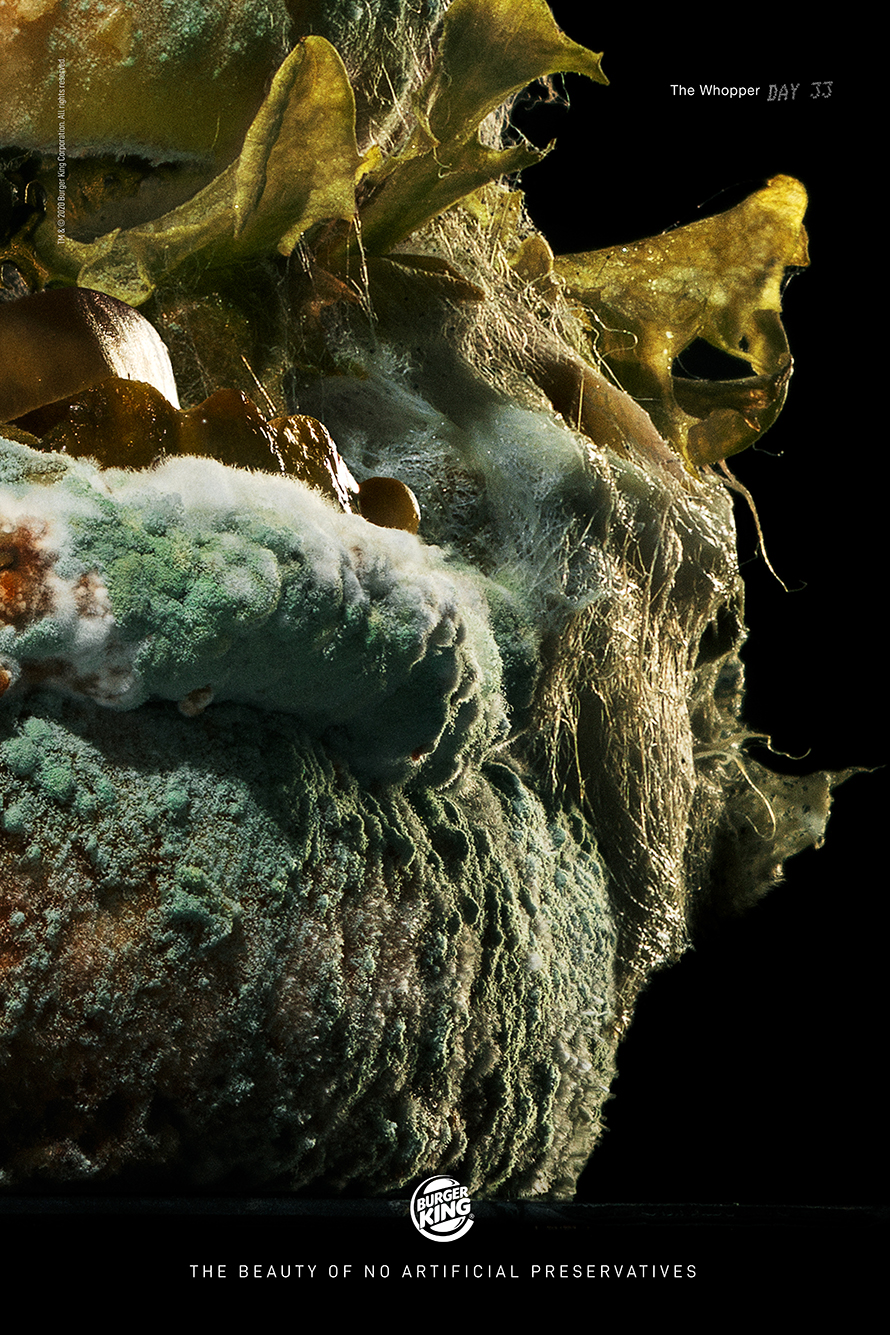 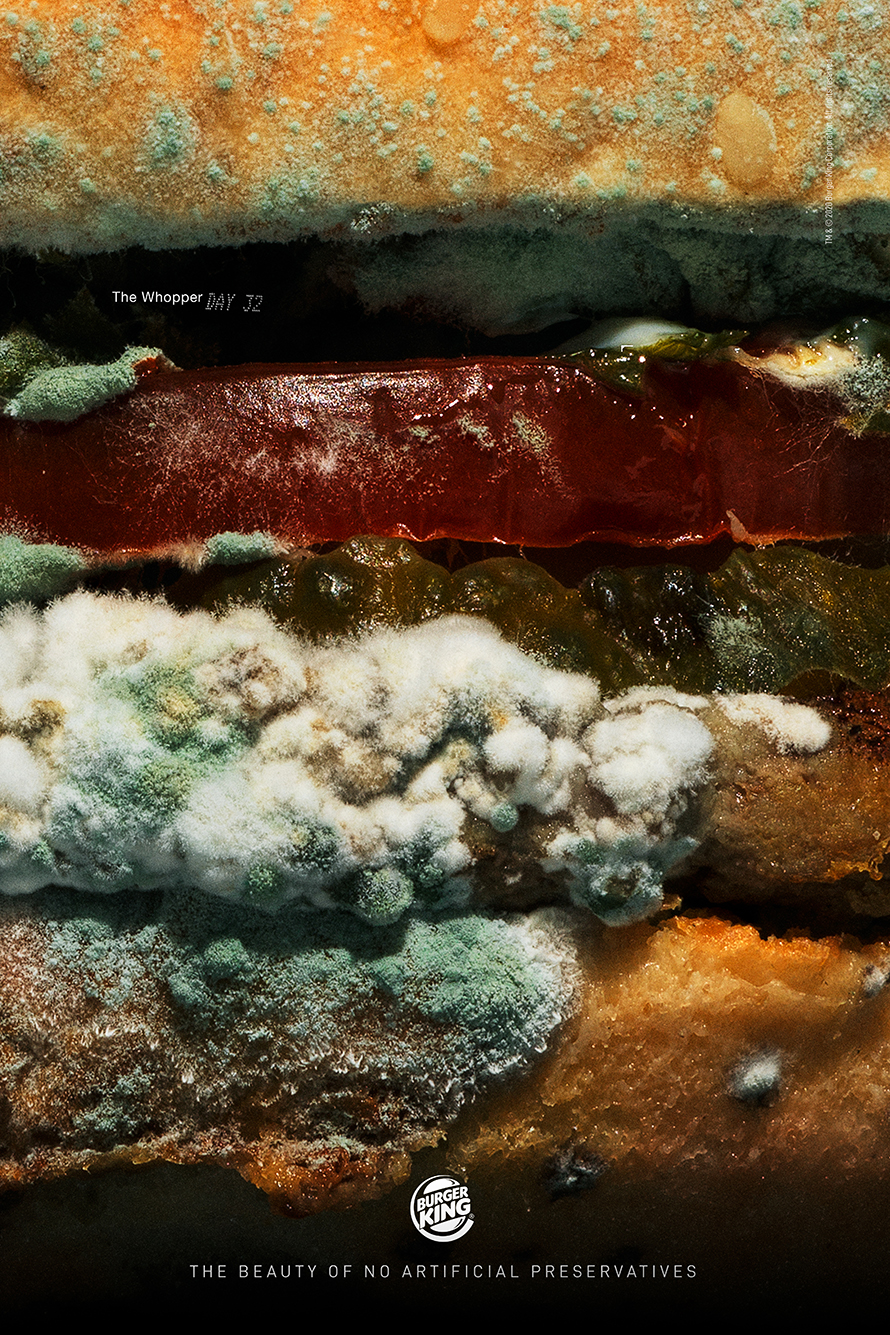 MUSIC
“What A Difference A Day Makes” by Aretha Franklin