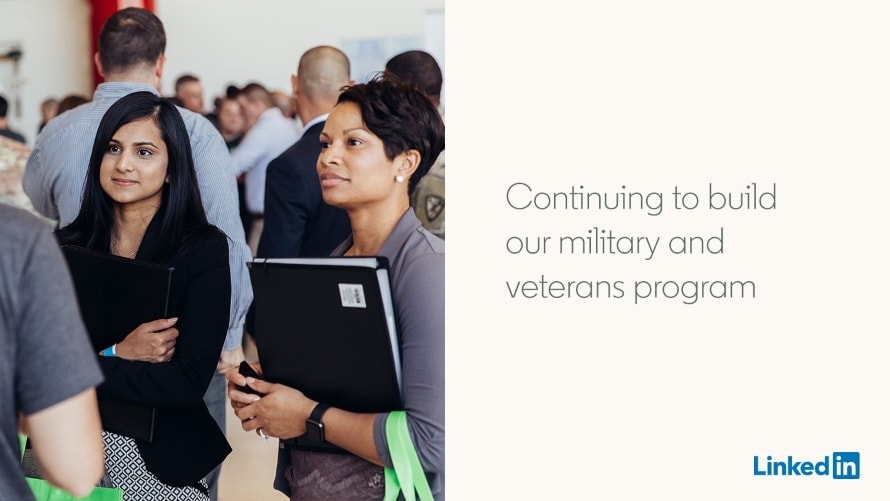 LinkedIn teamed up with the U.S. Department of Defense’s Spouse Education and Career Opportunities program last June to provide one free year of LinkedIn Premium to military spouses when their families move to new installations, and Wednesday, the professional network took that initiative one step further.

Head of military and veterans programs Sarah Roberts revealed in a blog post that starting next month, LinkedIn Premium will be made available to spouses in all branches of the armed forces, regardless of where they are in their professional transitions.

She added that LinkedIn’s goal is to support those spouses not just during changes of station, but also during events such as potential career changes or loss of a job.

LinkedIn Premium will be offered to recipients of the VA Fry Scholarship, which is awarded to the spouses and children of members of the armed forces who were killed in the line of duty during conflicts following the terrorist attacks of Sept. 11, 2001.

Family members of wounded veterans who are enrolled in the VA’s caregiver program will also be eligible for LinkedIn Premium. Roberts wrote, “These parents, spouses and children of returning service members often disrupt their career paths to take on the important role of caregiver.”

She said almost 2,000 military spouses took advantage of the initial offer since it was made available last June, adding that over 650,000 active-duty military spouses move to new locations every two to three years on average, and “the frequency of this displacement often comes with great sacrifice and leads to high rates of unemployment and underemployment, increasing the need for flexible careers and support.”

Roberts concluded, “The U.S. military’s nearly 1.1 million military spouses, veteran caregivers and the families of the fallen each have a valuable role in making up the fabric of the military community. On LinkedIn, this community continues to be one of the most collaborative, active and engaged communities. LinkedIn is honored to support service members, military spouses, family members and caregivers as they continue to demonstrate their willingness to mentor, network and offer career support and advice across the community.”